A new study claims that, by the end of this century, some cities in the Persian Gulf will be uninhabitable by humans, thanks to extreme temperatures up to 170F (76c).

A human body may be able to adapt to extremes of dry-bulb temperature (commonly referred to as simply temperature) through perspiration and associated evaporative cooling provided that the wet-bulb temperature (a combined measure of temperature and humidity or degree of ‘mugginess’) remains below a threshold of 35 °C. (ref. 1). This threshold defines a limit of survivability for a fit human under well-ventilated outdoor conditions and is lower for most people. We project using an ensemble of high-resolution regional climate model simulations that extremes of wet-bulb temperature in the region around the Arabian Gulf are likely to approach and exceed this critical threshold under the business-as-usual scenario of future greenhouse gas concentrations. Our results expose a specific regional hotspot where climate change, in the absence of significant mitigation, is likely to severely impact human habitability in the future.

Unfortunately the main study is paywalled, but according to the press release in Time Magazine;

A number of cities in the Persian Gulf region may be unlivable the end of the century due to global warming if humans do not curb greenhouse gas emissions, according to new research.

The study, published in the journal Nature Climate Change, projects that by the end of the century heat waves in Doha, Abu Dhabi and Bandar Abbas could lead to temperatures at which humans physically cannot survive over a sustained period of time by around 2100. The threshold, estimated around 170ºF, takes into account heat and humidity that prevent humans from exercising natural functions that allow the body to cool.

“Such severe heat waves are expected to occur only once every decade or every few decades,” said study author Elfatih A. B. Eltahir, a professor at the Massachusetts Institute of Technology. “But when they happen they will be quite lethal.”

According to Wikipedia, the hottest temperature ever recorded was 57c (134F) in Death Valley, in 1913. 76c (170F) might not seem like much of a leap from 57c, but the cities Doha, Abu Dhabi and Bandar Abbas are all coastal cities which experience substantial Summer rainfall.

Summer rainfall and storms are natural air conditioning. When temperatures soar, evaporation, convection and storm activity remove vast amounts of excess heat from the surface and transport the heat straight up to the edge of space. The heat laden water vapour keeps rising until it condenses – the vapour simply punches straight through the bulk of the world’s greenhouse blanket, soaring into the upper reaches of the troposphere, until it finds a height at which it can dump its vast store of heat. 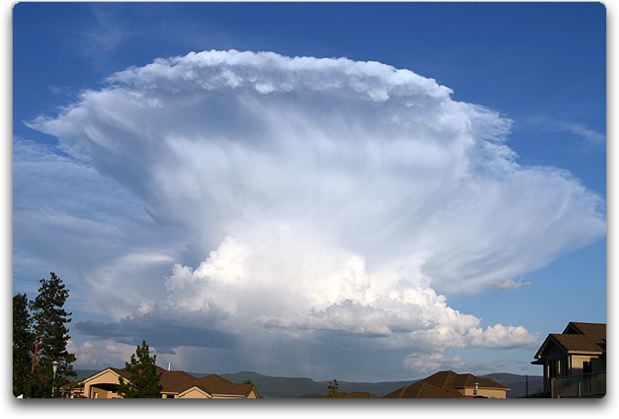 Anyone who has spent time in the tropics, who has seen the towering thunderheads which form in Summer, has experienced this cooling phenomenon in action. The air is always very perceptibly cooler after a major thunderstorm.

Abhu Dhabi, Bandar Abbas and Doha aren’t going to run out of “coolant” – as coastal cities, any evaporation is immediately replaced from the inexhaustible waters of the world’s oceans.

If the world warms, what is surely more likely than implausibly high maximum heatwave temperatures, is that the temperature would stay about the same, but Summer rainfall would increase.