Once again the Week In Review-Science Edition over at Dr. Judith Curry’s website brings up interesting news. It appears that the first of July was hot in the UK, and among others the airport at Heathrow set a record high temperature for the date.. This led to a bit of a flap over in the land of the Anglo-Saxophones.

The British newspaper The Telegraph said that they thought the record was bogus. They theorized that it was caused by jet exhaust and wind changes, which seems quite reasonable to me. In response, the Met Office swung into action and posted up a page on their “Carbon Sense” blog saying that no, it was a break in the clouds that did it, the extra sun raised the temperature. Here’s their money graph: 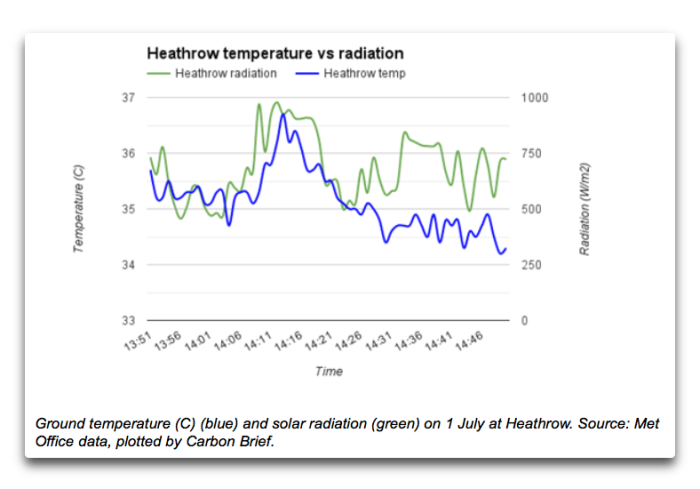 Figure 1. Graph of solar radiation and temperature at Heathrow for the hottest hour on July 1, 2015

They used this graph to claim that it’s the sun, stupid … but the first problem is, according to their graph, about twenty minutes after the peak in temperature, the clouds parted a bit and the solar input jumped up again to nearly as high as it had gone before … but the temperature didn’t change in the slightest. Well, that’s not entirely true. The second time the sun strength increased, the temperature went down. If the temperature spike early in the record were from the sun, does it make sense to you that a subsequent solar spike twenty minutes later would lead to no warming at all?

The second problem is that the sun strength stayed high,  but the temperature started dropping before the succeeding decrease in sun strength.

In any case, they kindly provided the data used in the graph, kudos to them for that, plus the wind direction and strength data so we could see that it’s the sun, stupid … except for one detail. They are using that graph and data  to claim that it is the sun, not the wind direction as claimed by the Telegraph, that caused the temperature spike.

Of course, this means nothing about the longer term. However, for the short-term period around the temperature spike, they certainly have not established their case, so we’re still left with the question of what caused the temperature peak.

Some insight into this question comes from the UK Met Office. They’ve kindly provided these examples of the highest record-setting temperatures in the UK on the first of July, 2015 (see the 7 July 2015 entry here ) 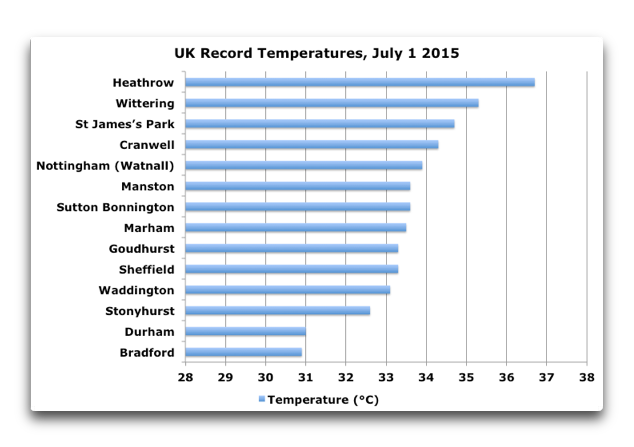 Figure 2. Highest temperature records set on the first of July, 2015

Now, looking at Figure 2 we have two possibilities. Either a) human actions are increasing the surface air temperatures recorded at Heathrow, or b) by an astounding historical coincidence, the UK’s largest airport was built precisely on top of the warmest spot on the island … I’m going with a) myself, although YMMV.

So being an inquisitive type of fellow, I decided to take a back-of-the-envelope look at just how much actual thermal energy is released at Heathrow. This doesn’t include the heating effect of all those square metres of runway asphalt, but it’s a start.

A bit of research shows the CO2 released at Heathrow by the actual burning of fuel on the ground and in takeoff and landing (under 3,000 feet [900 m] elevation) is about 1.6 million tonnes of CO2/year. Most of this is in the form of jet fuel, which sounds all high-techy but which is actually kerosene.

Using the conversion factor for kerosene of 71.5 kg of CO2 per gigajoule of energy, this converts to 2.24E+16 joules/year, or 6.13E+13 joules per day, of heat solely from the burning of the fuel.

Now, how much would this release of energy warm the air? Well … how much air are we considering? Heathrow covers a large area, 1227 hectares. So let’s figure the air above Heathrow up to the 3,000 feet elevation under which they’re counting the CO2 emitted.. That’s about 1.12E+10 cubic metres of air, or about 1.43E+10 kg of air.

The specific heat of air is easy, it’s about 1 kilojoule per kilogram per degree C. And we can probably figure that about 30% of the energy is used to produce mechanical work, with the rest lost as heat.

So, imagine that we could put a transparent air-tight dome over Heathrow 3,000 feet (900 m) tall, and one day we burned 6.13E+13 joules worth of kerosene inside the dome, and 70% of that energy went into heat … how much would that raise the air temperature?

Short answer? It would give about a 3°C temperature rise, which is 5.4°F.

Now, of course as soon as the air is warmed by jet exhaust it starts rising, and the heat moves constantly upwards and outwards and cool air mixes in at the bottom, so there is no average 3°C temperature rise on the surface.

But obviously, looking at Figure 2, including warming from all sources there is something like a degree or so of peak temperature increase from the urban heat island at Heathrow.

What is this from? While some is from the acres of hot asphalt runways cooking in the sun, in part it’s from the actual burning of the fuel. Have you ever been caught by the blast from a jumbo jet, even from far away? I have, many times. It smells like kerosene, and it’s warmer than the surrounding air, sometimes much warmer. When one of these blasts hits you, you can easily feel the difference in temperature … and so can the airport thermometer.

With that in mind we can see how desperate the UK Met Office is in their defense of the record. Consider this quote from Dr Mark McCarthy, head of the Met Office’s National Climate Information Centre:

Nor does it make sense to think that a passing breeze could have carried a waft of heat from a nearby aircraft, as Homewood suggests. McCarthy tells Carbon Brief:

“We have checked with [air traffic control] and confirmed that the north runway, which is closest in proximity to our observing station, was being used for landing aircraft. Therefore, landing aircraft would most likely have had idle engines by the time they reached the eastern half of the runway, where our observation station is sited.”

Had passing aircraft generated turbulence, that would help mix the air close to the ground. This would be more likely to lower the air temperature than raise it, McCarthy says.

I fear Dr. McCarthy has not spent enough time out on the tarmac … first, after landing jets do not have “idle engines”. They use their engines to move around the airport, blowing hot air out behind them as they go. And every time they stop, it takes a big blast of hot air to get them moving again. And second, while it is possible for jets to reduce the ground temperature because of the turbulence from their wings, in general, guess what?

Burning about a million gallons (3.4 million litres) of kerosene per day in one location generally does NOT lower the air temperature as McCarthy implies.

Here’s part of the problem. This shows the location of the meteorological station at Heathrow.

Figure 3. Location of the meteorological station at Heathrow Airport is shown by the white circle. The large runway across the middle is the “north runway” referred to by Dr. McCarthy in the quote above. Note the jet at the bottom for scale.

As you can see, the met station is about 150 metres (500 feet) from the north runway. The difficulty comes after landing and slowing down, when the jets turn off of the eastern end of the runway by the met station on one of the side taxiways. At times in that process, their jet exhaust will be pointed directly at the temperature measuring station. Indeed, when jets turn off on either of the  two right-hand taxiways in the picture above, their jet exhaust is pointed directly at the met station for the entire trip down the taxiway … and did I mention that the wind was from the south and southeast during the time of the temperature record, blowing from the taxiways towards the met station?

So … did jet exhaust cause the large spike in Heathrow temperatures on 1 July 2015 that created the new record? I’d say:

a) we don’t know, although it certainly seems plausible and winds were in the right direction, and

b) it certainly can’t be ruled out by what the Met Office has shown, but in any case

c) it doesn’t really matter because jet fuel and runway tarmac assuredly warms Heathrow in general, so any Heathrow records are not very reliable or meaningful.

One final thought for you. Heathrow proudly proclaims that from 2012 to 2013 it decreased its CO2 emissions by 11,923 tonnes of CO2. Cue the applause.

However, during the same period, China increased its emission rate by 358,304,399 tonnes/year of CO2. This means that the increase in Chinese CO2 emissions, not the amount of the emissions themselves but the amount of the increase in emissions, is about 40,874 tonnes per hour… which means that all of Heathrow’s proud one-year accomplishment of emission decreases during all of 2012 was wiped out by China in the first 17 minutes after midnight on January 1, 2012.

Dust in the wind …

Heathrow Airport Details: Over at the Talkshop, tchannon has a good description of the physical layout of the airport here.

Update from the Comments: First, a number of folks mentioned thrust reversers, which I’d forgotten to consider, and the fact that they blow the warm jet exhaust to the sides … in other words towards the met office.

Also, someone talked of the importance of winds. This is very true.

Wind is indeed important, at times crucial. And even if the speed is constant, the direction can be critical. I was going to include the following but the post was getting long. Another example of met office guys not getting out enough. 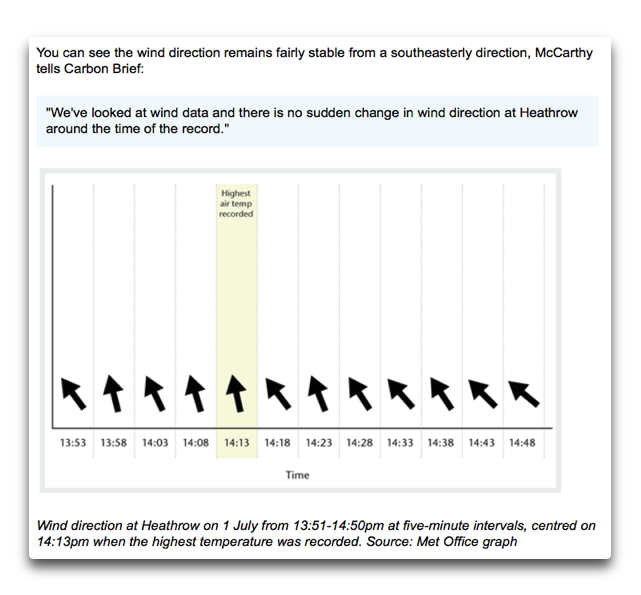 Now, any swabbie sailor like myself would look at that and say “Yep, that wind is swinging quite a bit”. It looks pretty typical for a wind regime, the wind direction tends to sway from one side to the other once or twice in an hour or so, which this does.

How much is it swinging? Well, it swings from a minimum of 130° (about southeast) to a maximum of 180° (south) during the hour. This is a not insignificant range of no less than fifty degrees.

And the largest rate of swing was a change of fifteen degrees in five minutes … so I’d have to disagree with Dr. McCarthy when he says:

“We’ve looked at wind data and there is no sudden change in wind direction at Heathrow around the time of the record.”

All the best to you all,