…and human civilization did just fine.

Our current beneficial, warm Holocene interglacial has been the enabler of mankind’s civilisation for the last 10,000 years. The congenial climate of the Holocene spans from mankind’s earliest farming to the scientific and technological advances of the last 100 years.

When considering the scale of temperature changes that alarmists anticipate because of Man-made Global Warming and their view of the disastrous effects of additional Man-made Carbon Dioxide emissions, it is particularly useful to look at climate change from a longer term, century by century or a millennial perspective.

The profile of our current Holocene epoch with temperature averages century by century set against the maximum of the past Eemian epoch and the predictions of Catastrophic Global Warming alarmists this century.

The much vaunted and much feared “fatal” tipping point of +2°C would only bring Global temperatures to the level of the very congenial climate of “the Roman warm period”.

If it were possible to reach the “potentially horrendous” level of +6°C postulated by Warmists, by the inclusion of major positive feedbacks from additional water vapor in the atmosphere, that extreme level would still only bring temperatures to about the level of the previous Eemian maximum.

The Vostok and EPICA Antarctic ice core records show that there have been 5 interglacial periods in the last 450,000 years, they have varied both in temperature intensity and duration.  On occasions some earlier interglacial periods were significantly shorter than the 10,000 year norm.  These climate changes can be seen in the overlaid Vostock and EPICA Ice Core records from the Antarctic.

The periods of glaciation and Interglacials show a fairly regular pattern. The Antarctic based EPICA and Vostok Ice Cores above mostly show good accord for the last 200,000 years.  But earlier there seems to be a similar pattern but with some significant time displacement in the period between 200,000 and 450,000 years ago.  Those two Antarctic records are not so well coordinated during the recent Holocene period.

Warm Interglacials seem to last roughly 10,000 years and the intervening periods of full encroaching glaciation persist for some 100,000 years or more in between.

Prior to the Holocene epoch a period of deep encroaching glaciation had persisted for the previous 100,000+ years.  Such glaciation meant that a mile high ice sheet covering New York  and much of the currently inhabited Northern hemisphere.  That glaciation was preceded by the Eemian interglacial period.  The Eemian epoch was at its warmest about 120,000 years ago.  It was some +3°C warmer than the Holocene “Climate Optimum”, only about ~8000 years ago.

So based on this pattern of radical climate change our current benign Holocene interglacial could well be drawing towards its close. 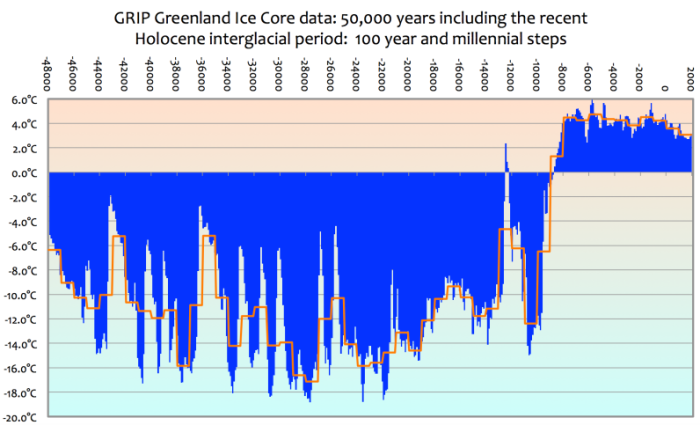 According to longer term Northern Hemisphere Greenland GRIP ice core records, the last millennium 1000 – 2000 AD was the coldest of the current Holocene epoch, with millennial average temperatures about 1.8°C lower than its early “Holocene climate optimum” in about 6000 BC.

There has since been a comparatively minor temperature recovery since the Little Ice Age some 300 years ago.

However, it is this minor temperature recovery that has recently given rise to the “Great Global Warming Scare”.

The temperature progress of the current Holocene interglacial epoch for the last 10,000 years is interesting as a gauge for all the recent Warmist and Alarmist predictions that have been developing over the most recent 40 – 50 years.

The Holocene interglacial can be divided into two phases. 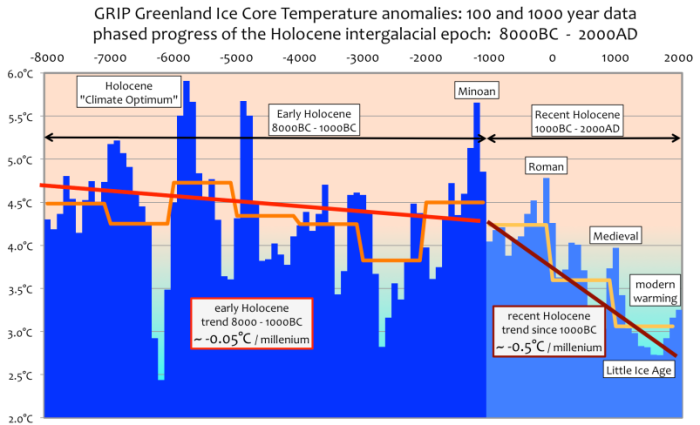 Judging from the lengths of past interglacial periods, after some 10,000 – 11,000 years the Holocene should be drawing to its close.  A climate reversion to full, encroaching, glaciation is therefore foreseeable, if not overdue, in this century, the next century, or this millennium.

Looked at from the point of view of the most recent 3 millennia which have experienced accelerated cooling, a continued natural climate change towards a colder climate is now more, rather than less, likely.

Cooling would lead to more intense and adverse weather:  there is good reason to expect this, simply because the overall energy differential between the poles and the tropics can only be greater with cooling and that in itself would lead to less stable atmospheric conditions.

In addition to more adverse weather, any coming cooling will also lead to very serious deprivation for mankind and the biosphere as a whole.  Growing seasons will shorten and less arable land will be capable of crop production.

The much vaunted and much feared “fatal” tipping point of +2°C would only bring Global temperatures to be at the level of the very congenial and productive “Roman warm period”.  A further rise of +2°C could only bring positive economic benefits to the bulk of the Northern hemisphere.

Catastrophic Global Warming alarmists postulate that temperature rise will reach the “potentially horrendous” level of +6°C by from the inclusion of major positive feedbacks from additional water vapor in the atmosphere.  The +6°C temperature level would still only bring global temperatures only to about the level of the previous Eemian maximum.

The Eemian interglacial ~120,000 years ago, was a warm and more plentiful period in the worlds recent history:  hippopotami thrived in the Rhine delta.  As ice sheets substantially receded in the Eemian, resulting sea levels were about 3 meters higher than found at present.  But that ice sheet disintegration process would have taken millennia to be fulfilled.

But according to the Alarmists all this radical and destructive temperature increase is supposed to occur over a span of less than 100 years in this century 2000 – 2100AD.  And it is solely attributable to Man-kind’s burning of fossil fuels and emission of extra Carbon Dioxide into the atmosphere.

but there has been no perceptible increase in Global temperature.

aggressively assert catastrophe with excessive temperature rises.  But is extreme hubris to expect that mankind could achieve a complete reversal of the world’s climatic progress of the last 3000 years and achieve an additional positive +6°C change over the course of the current century.

When the postulated warming in the coming century as promoted by the IPCC and other Global Warming alarmists is collated against the progress of actual Holocene temperatures, the absolute implausibility of the Man-made global warming hypothesis becomes obvious.