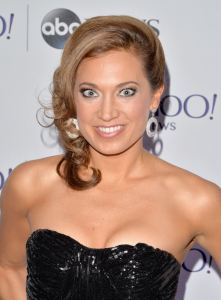 Ginger Zee, is an American television personality. She is the current weather anchor for Good Morning America and ABC World News Tonight on ABC and before that was their weekend weather anchor. Zee is the weather editor for all of ABC News’ platforms. Image: Wikipedia

Andrew Tyndall, news consultant: If you don’t tie every event to climate change when reporting the weather, its like pornography

“If Ginger Zee reported in the role of climatologist rather than meteorologist, I would praise ABC’s ‘World News Tonight’s’ decision as a daring intervention into a crucial national and global debate,” he said. “Instead, she is more like a pornographer.”

Ginger Zee’s sin, in the eyes of Andrew Tyndall, appears to be that she gives more airtime to reporting weather events, than to preaching climate fear to her TV audience.

However, Patrick Burkey, Nightly News executive producer, spoke up in defence of the way weather is reported on TV.

“Weather coverage can drive ratings,” Burkey said, but “you have to be careful that you’re not covering weather stories that aren’t real news every night. It’s an easy way to lose the trust of the audience about what is really an important weather story.”

Who knows – when climate alarmists find something interesting to say, rather than rehashing the same tired fear mongering nonsense every time they speak, their views might get a little more airtime.