WQAD ran a story reporting climate models predict climate change will make various types of weather events worse, titled “Climate change is spiking frequency, intensity of severe weather.” The story is misleading in couple of ways. First, although the title suggests climate change is already acting to make extreme weather worse, the story itself focuses on predictions for the future based on climate models, not current trends. Indeed, data does not support the claim that climate change has increased the frequency or intensity of tornadoes, thunderstorms, derechos, or snowstorms. Secondly, the climate models predicting that weather will become more extreme, are seriously flawed. They don’t reflect past or present temperatures accurately so their predictions of future climate should not be trusted.

“Severe weather in the Midwest can bring dangerous systems that develop quickly,” says the WQAD report. “A changing climate means better potential for tornadoes, thunderstorms, Derechos, and snowstorms to be even more powerful than before.”

While the first statement is absolutely accurate. The second claim is pure speculation. History and data indicate climate change could equally mean fewer, less intense storms across the region.

WQAD’s statements regarding tornadoes are cautious, and rightly so. In its most recent science report, Assessment Report 6 (AR6) released in July, the Intergovernmental Panel on Climate Change (IPCC) reports it has found no worsening of tornadoes during the period of modest warming and cannot attribute any changes in tornado frequency or strength to human caused climate change. Indeed, even as the number of reported tornadoes has increased due to better reporting over the past 50 years, data from the National Oceanic and Atmospheric Administration indicates the number of strong tornadoes has declined during the period of warming. (See the figure below)

Concerning thunderstorms, the facts are just as unalarming. As with tornadoes, IPCC AR6 reports no evidence thunderstorms are becoming more extreme, nor any evidence that any changes in thunderstorm frequency are attributable to human causes. One concern arising from extreme thunderstorms is the threat of flooding. Concerning that, the IPCC reports climate change is as likely to have reduced flooding as it is to have made flooding events more common. Also, on page 99 of the 2018 National Climate Assessment published by the National Oceanic and Atmospheric Administrations, its states, “Human-induced warming has not been formally identified as a factor in increased riverine flooding and the timing of any emergence of a future detectable human caused change is unclear.”

Concerning Derechos, as explained on Watts Up With That, these infrequent events are caused by a relatively rare confluence of weather conditions, and there is no evidence climate change is likely to make those conditions arise and coincide more often in the future.

The IPCC also reports there is no evidence winter storms are becoming more intense, delivering more powerful wind or greater amounts of snowfall. The IPCC’s report is confirmed by satellite data recorded by NASA. As discussed in Climate at a Glance: Snowpack,  the extent of average North American snowpack has been virtually unchanged in recent years compared to the late 1960s, when satellite measurements began. Following a short-term decline in snowpack in the mid-1980s, average North American snowpack has increased. As shown in the figure below, what’s true of snowfall in the United States is true for most of the Northern Hemisphere as well.

One last thing WQAD should have considered before publishing its story hyping climate induced increases in extreme weather is the fact that the projections it references of worsening weather were produced using climate model simulations. Yet, as explored in Climate Realism, here, here, and here, for example, and in Climate Change Weekly, here and here, the general circulation models referenced by the IPCC are flawed and produce results that are woefully inaccurate. Models overstate warming and for more than 30 years have consistently predicted increases in extreme weather that have failed to materialize.

In the end, climate models are not scientific evidence, just like theories are not facts, and the evidence that exists indicates extreme weather events are not increasing. WQAD would do a great service to its audience, if it informed them of that. It might decrease any climate alarm inflamed anxieties those watching their reporting over the years have developed after years of seeing unverified climate change scare stories on the channel.

H. Sterling Burnett, Ph.D. is managing editor of Environment & Climate News and a research fellow for environment and energy policy at The Heartland Institute. Burnett worked at the National Center for Policy Analysis for 18 years, most recently as a senior fellow in charge of NCPA’s environmental policy program. He has held various positions in professional and public policy organizations, including serving as a member of the Environment and Natural Resources Task Force in the Texas Comptroller’s e-Texas commission.

There is always a market for scary stories.

YUP! My mother used to watch the “news” every night and she was constantly in fear and would try to export the fear to us kids, she was born in 1924. Smoking killed her.

My grandmother born in1873 had an expression about what was written in the news papers. She said, “The paper must have held still”

Mark Twain is good for comments about news reporting. “If you don’t read the news papers you are uninformed, if you read them, you are misinformed.”

Remember – every newspaper story is 100% accurate – except that one story that you have personal knowledge of.

Great report and thanks for the updated graphs. Good stuff to use during my climate Armageddon talks. I also mention that CO2 does not trap heat, it instead uses the “catch and release” method … https://www.youtube.com/watch?v=kAdiCbhBuUk

Mods, the second figure is a repeat of the Tornado graph.

Exactly. The ‘snow graph’ is missing.

I think this is it: 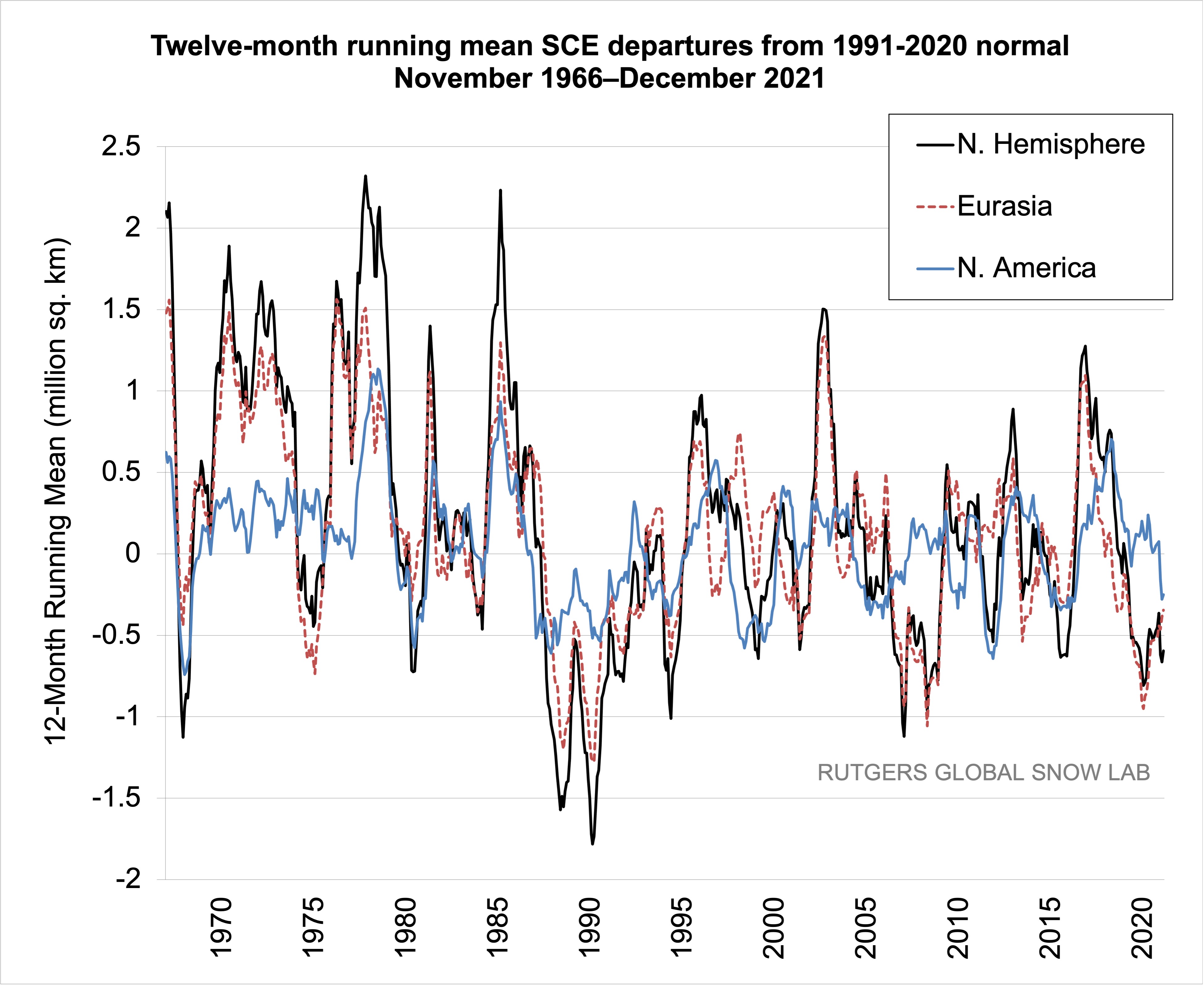 found on this page:
https://climate.rutgers.edu/snowcover/chart_anom.php?ui_set=0&ui_region=nhland&ui_month=2 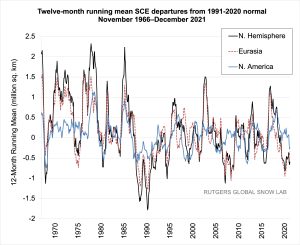 This just shows there is a fundamental problem with climate models (posted several times previously). Because of the CFL constraint to numerically solving model partial differential equations at relevant scales (~2-4km convection cell grid scales) this results in about 7 orders of magnitude computationally intractability, when at the present large grid scales (CMIP6 average about 280km at the equator) a single run on the best supercomputer still takes two months.

So models are necessarily parameterized. That automatically drags in the attribution problem between natural variation and AGW. The IPCC assumes it away (by charter), as do models. So they run hot and fail.

“The IPCC assumes it away (by charter),”

Yes, the Climate Change Propagandists want us all to believe that CO2 is driving the Earth’s weather and making things worse, but all the facts show this is not the case. Even the IPCC says so. Yet the climate alarmists continue to lie to the public and claim they see a human fingerprint on the Earth’s weather. It’s a bald-faced lie.

Tornadoes are largely caused by weather systems of different pressure and temperature levels colliding. Global warming theory predicts the poles will warm faster than the equator so that means pressure and temperature differences should get less over time which should in turn lead to fewer tornadoes. This is in fact exactly what we see in the data. Unfortunately saying modest warming will lead to fewer tornadoes doesn’t result in increased funding and panic so they just go ahead and lie about what their own crappy models predict.

Your argument is generally correct. It was MIT’s Richard Lindzen who first pointed out over a decade ago that IF polar amplification is correct, then severe weather must become less severe. (Because of decreasing temperature gradients on average.) An intrinsic logical inconsistency in the alarmist catachism.

Rud, please don’t tell that to NGO campaigners and media profiteers. A whole industry could be destroyed!

“It was MIT’s Richard Lindzen who first pointed out over a decade ago that IF polar amplification is correct,”

The emphasis being on “IF”.

Remember that, since you are dealing with energy, the proper polar/equator relationship is measured in K, not degrees C or F. The ratio 263/363 is not significantly different from 268/365.

That’s a recipe for milder weather, not worse storms.

Our usual last frost/freeze around here is about April 1. The forecast is for a freeze tonight, April 8.

Looks like it is a broadcast channel for ABC from the source link.

This good news is _not_ what we are told by our state propaganda outlet (TVNZ) here in NZ. We are told the opposite, and on a daily basis.
We are told that the predicted worsening weather is already happening. Were were told that some recent flooding was 10-15% worse because of our CO2 emissions, so it seems that experts are even able to determine how much worse our individual weather events are. We are told that the rain we get is worse because warm air can hold more water, so therefore more water falls out of the sky when it rains. Then again, some ‘unprecedented’ dry spell in Southland was apparently also due to the changing climate.
Were are given a daily dose of this tripe, and we are _never_ treated to any of this inconvenient information.

Also, I find this wording (from NOAA) interesting…
“Human-induced warming has not been formally identified as a factor in increased riverine flooding and the timing of any emergence of a future detectable human caused change is unclear.”
It’s as though they _want_ to put it down to humans, but just haven’t found a way to do it yet. Or that they’re sure there will be a signal, but the pesky evidence is a bit elusive.
And why did they use the word ‘formally’. The unwary reader might infer there’s been ‘informal’ verification.

“It’s as though they _want_ to put it down to humans, but just haven’t found a way to do it yet.”

Yes, they do want to put it all down to humans. They want this so badly that they are willing to lie about the subject, which alarmists do on a daily basis.

Alarmist Climate Science has a BIG bias. Everything they do is filtered through this “human-caused” bias. They assume human causes. Without any evidence.

TV station in Moline, Illinois. ABC network. I should volunteer to be on their resource list.

Sigh! I’m feeling older by the day. It used to be that “data” was the plural of “datum”.

It still is. It’s just that datum is no longer the singular of data. Progress.

WUWT Contest Runner Up, General: Is There Really a Climate Crisis?

Claim: Climate Change Likely to Reduce the Amount of Sleep That People Get Per Year

What is the Full Cost?