Pack ice is barreling down the Labrador coast, almost certainly bringing Davis Strait polar bears with it. And according to new survey results, those bears are doing just fine: numbers are stable, bears are fatter than they were in 2007, and cubs are surviving well – thanks largely to abundant harp seals.

I suggest that it’s quite possible the actual number of bears in the population is at least somewhat greater than the official estimate indicates: that the real number lies closer to the higher end of the estimated range rather than at the middle. Of course, that’s always the case because these estimates are based on counting a subsample of bears and extrapolating to the entire region using a mathematical model.

However, this is why other indicators are important. Good body condition and good cub survival indicate a population that’s in good shape. Similar indicators have been seen in the Barents Sea and Chukchi Sea subpopulations (Aars et al. 2017; Norwegian Polar Institute 2021; Rode et al. 2014, 2018).

Certainly, 2017 and 2018 stood out as having many more sightings of bears along the Labrador and northern Newfoundland coast than there were in 2007. In contrast, sea ice was extensive along that coast in 2007 yet there were no sightings of polar bears reported.

Compare above to 2017, when the ice was very thick later in the season north of Newfoundland: thicker, first year ice from the north (light green) had replaced virtually all new ice along the coast.

Time will tell if the pack ice off Newfoundland in April will be as thick as it was in 2017 but at the moment, conditions are looking good for East Coast harp seals set to give birth to pups in March and the Davis Strait polar bears that come to feed on them.

The problem with polar bears and global warming is that the world expectation of these bears is an ice environment, without land. While the truth is these are highly adaptable creatures.

Yes
Indoctrination and miseducation are what you are describing.

There is no problem with the polar bears

The problem is entirely with the humans

especially when not hunted

The earliest known fossil remains of polar bears and their immediate antecedents are about 3 million years old, meaning they predate the Quaternary period, meaning the entire “ice age” string of 26 glaciations and interglacials. Talk about adaptability!

I thought that genetic analysis suggested that polar bears and grizzlies split off about about 250,000 years ago or so. Do I mis-remember?

Yup – I believe Duane has made a slight error. The earliest known fossil remains of Polar Bears were found on Svalbard and date to around 110,000 – 130,000 years ago. There are no known polar bear fossil remains from any earlier period. It’s a very interesting fossil as it has preserved DNA which indicated that the bear was living, hunting and eating the same as modern Polar bears but genetically was almost the same as Brown bears. The scientists estimate that the bear was close to the point when Polar Bears split from Brown bears, which probably happened no earlier than about 150,000 years ago. All of this is easily available to a basic internet search.

I wrote “polar bears and their antecedents”. Virtually no species has existed unchanged for millions of years – every species continues to evolve to achieve maximum success. Including humans. The point being, polar bears and their ancestors are extremely adaptable with fossil funds going back 3 million years.

That’s very interesting. It suggests the possibility that this is the first interglacial period for this species and its particular ecological niche. However, given the dramatic changes made by moving ice during glacial periods, I would wonder if earlier fossils are just very hard to find. The genetics suggests that it is a pretty new species.

It looks like Arctic ice extent is already greater than its maximum that was recorded in 1974 and it’s still increasing. The typical yearly maximum extent reaches its peak in about a month.

Scissor — this year’s arctic freeze is well above recent years (fluctuating around 15th or 16th lowest on this date per JAXA data reported on Artic Sea Ice Forum). That’s good news unless your name is Al Gore. Maybe 1974 was a low year, but extent not in record territory.

Grif will be weighing in shortly with his mathematical model, showing polar bears in a steep decline.

6
Pat from kerbob
Reply to  Alan

Griff doesn’t do math, I’m unsure he is even aware it exists.

He knows it exists – it’s just that it is too difficult for bears of little brain like Griffy or ‘Climate scientists’.

He thinks math is racist. I wonder if he knows polar bears are black under that fur.

There are still polar bears?
Has David Attenborough been made aware of this discovery?

The bears followed the walrus off the cliff, being chased by Attenborough camera persons.

He forgot to take the lens cap of his camera and closed his eyes, just in case he might see something true.

I thought the polar bears were in Dire Straits! 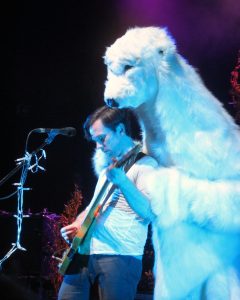 ‘Pack ice is barreling down the Labrador coast’

and why is that? why is Labrador seeing so many low ice years affecting seal population?

poor Griff. Time to put your head up back where it belongs.

maybe the world is far more complicated than you can imagine

Like The Guardian, his favourite paper, Griff is never right about anything, ever. Good old reliable Griff.

Griff mate, before shooting from the hip, you should check the facts for yourself

Uhh, maybe because Labrador is not actually in the Arctic, the center of the province being at 54 deg north latitude, just south of Edinburgh, Scotland.

Yes, you can see the effect here: 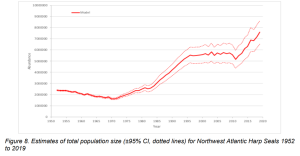 But it isn’t affecting the seal population – that’s the crux of the article. Seal populations are flourishing, as are the Polar Bears that feed on them.

So what you’re saying is that the stable population of fat and healthy bears is proof of the disaster that we otherwise can’t see, except in models of the future? Is that right?

Thank you for the update about the polar bears and Davis Strait ice conditions.

I remember when the poley bears aka the canaries in the climate coal mine were “doomed” according to the Warmunists.
Oops.

They are still doomed according to warmunists. Only have to go as far as the WWF TV commercials and donate your $100 today to make sure every polar bear will have a home.

LOL. I don’t know what they think they can do with their donations to make any such change. I feel like calling them up to find out, I am so curious. It is worse than buying holy water from TV preachers.

Don’t be curious or you’ll find out that 0% of the donations go to the Polar Bears whilst the many employees of the WWF enjoy a comfortable income, good retirement package and generous holiday time, where they can jet off to exotic locales. Not to mention the money that is siphoned off to support activists of, shall we say, dubious moral standing?

No, no. Now you have to buy a bracelet from FAHLO with the name of a polar bear on it.

Must be wrong: it’s just a survey, not a model output…

The poley bear at the top looks like one of them Ninja Bears.

It should be obvious to everyone that seal populations are much more important to Polar Bears than sea ice levels. We have all be taught that predator populations are locked into a cycle with their pray.

Seal populations, in turn are dependent on fish, so far as I know. It could be that the changes to Canadian fishing limits has improved the food source for the seals. I know the cod numbers have been steadily rising on the East coast. On the other hand, the fur seal hunt is greatly reduced, but regardless, there does seem to be more fish.

Geology from 50 Light-Years: Webb Gets Ready to Study Rocky Worlds