Buy an EV or the Dolphins will get it? Activists now hope our love of dolphins will induce us to accept their wild climate claims.

Scientists at The Marine Mammal Center in Sausalito, CA—the largest marine mammal hospital in the world—and international colleagues have identified a novel skin disease in dolphins that is linked to climate change. The study is a groundbreaking discovery, as it is the first time since the disease first appeared in 2005 that scientists have been able to link a cause to the condition that affects coastal dolphin communities worldwide. Due to the decreased water salinity brought upon by climate change, the dolphins develop patchy and raised skin lesions across their bodies—sometimes covering upwards of 70 percent of their skin.

In all of these locations, a sudden and drastic decrease in salinity in the waters was the common factor. Coastal dolphins are accustomed to seasonal changes in salinity levels in their marine habitat, but they do not live in freshwater. The increasing severity and frequency of storm events like hurricanes and cyclones, particularly if they are preceded by drought conditions, are dumping unusual volumes of rain that turn coastal waters to freshwater. Freshwater conditions can persist for months, particularly after intense storms such as hurricanes Harvey and Katrina. With the increasing climate temperatures, climate scientists have predicted extreme storms like these will occur more frequently and, consequently, will result in more frequent and severe disease outbreaks in dolphins.

The deadly skin disease was first noted by researchers on approximately 40 bottlenose dolphins near New Orleans after Hurricane Katrina in 2005.

The referenced study is a little less certain about the link between climate change and dolphin health.

… Projections suggest that, on land, air temperatures will rise and rainfall will decline across much of Australia in coming decades; the combination of these drivers will likely result in overall reduced runoff and therefore reduced stream flow and lake storage. However, present climate models are particularly limited with regard to coastal and freshwater systems, making them challenging to use for biological-impact and adaptation studies. Therefore, exactly how warming temperatures will interact with the complex interplay of drivers as outlined above is uncertain, but precipitation extremes and the frequency of severe weather events such as floods, storms and cyclones are expected to increase into the future …

Nobody likes to see animals suffer. I guess we should all be thankful that our modern fossil fuel powered economies provide us the wealth and leisure to care for sick animals.

Have they ruled out the effect of dolphins eating rhubarb?

how many false claims can they make in one article?

and the wordsmithing in the last one is just beyond belief

The deadly skin disease was first noted by researchers on approximately 40 bottlenose dolphins near New Orleans after Hurricane Katrina in 2005.

Maybe a hint for the reason ?

No. It just as likely means we never spotted it before and correlation does not necessarily mean causation

From my file of smart remarks taglines etc:

“Observing something for the first time, doesn’t mean it has never happened before.”

Marsh gras beads. Do a search, tons are dumped every year. Or high proof piss from the drunkards.

I was wondering where one could get beads made from marsh grass.

Sitting – is that a word correct?

Wild unfounded claims like this BS cause an anger induced skin rash on this human.

FLAT LIE. Look up Ryan Maue, who keeps the wordwide indices of Accumulated Cyclone Energy and cyclone frequency. If anything, hurricanes have slightly decreased in energy and frequency over the last 30 years. Hurricanes have no lasting effect on ocean salinity either. Just more dishonest climate Alarmist carnival barking.

Or ocean pollution or bacterial runoff or any one of a dozen other possibilities.

It’s for the first time I read about a) desalination, b) even sudden and drastic and c) caused by climate change.
How much finger they use to sue such stories out of…..

5
David A
Reply to  Doonman

Doonman, really, great; their next study will be how extra saline oceans harm some random species.

I hope our brothers and sisters the dolphins can hold out until Jan 20, because then Presumptive President Elect Joe Biden will fight the “existential threat of climate change as a central part of his administration”. Wait for it. Or don´t.

I’d like to see what our resident gullibles think will be different after 4 years of Biden, if he even lasts that long.

Climate “science” is beginning to more resemble a Monty Python sketch every day. I can’t remember – did the dead parrot have a skin disease?

Speaking of resident gullibles, I’m thinking of sending a get well soon card to griff as 2020 arctic sea ice surpassed 2012 for yesterday, by 0.006 km^2.

Actually, if you want to yank griff’s chain, you can show your ability to be a Nobel Prizewinning climate screwball by practicing Mike’s Nature trick with this data, and probably at least the next month’s. Hide it in the spaghetti: 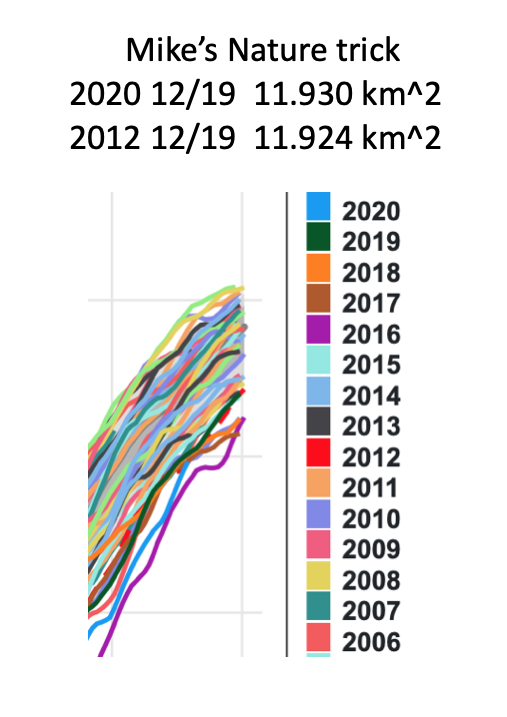 Did the 49ers beat the Cowboys tomorrow? I’ll get some money on that if they did.

And, in 2003 scientists realised an increasing salinity near equator and a decreasing one near the poles.

A change in the freshwater balance of the Atlantic Ocean over the past four decades
Now I ask the authors of the dolphin paper, where do dolphins usually live ?

I’m willing to bet that this so called study never actually bothered to measure the salinity of sea water. They just assumed that the output of the climate models must be correct and that therefore coastal waters are getting less salty, except where they aren’t.

I doubt that any the runoff of rain from Katrina was very clean fresh water. More likely, as the tidal surge retreated back into the Gulf, it carried every imaginable pollutant with it.

This would be funny, “The skin is the outer covering of the body.”   from “The deadly skin disease ” link, but I found this, never know what PHYS.org can find. https://phys.org/news/2020-07-ultra-music-festival-stressful-fish.html

Hurricanes are very hard on dolphins. So is freshwater for salt water species, don’t swim up the Mississippi River very often.

Harris, S. A. 1986. Beached. Louisiana Conservationist. 38(2):18-22.
Hoese, H. D., M. Konikoff and C. P. Juneau. 1986. An exceptionally large porpoise stranding from hurricane Juan on the central Louisiana coast. Proceedings of the Louisiana Academy of Science. 49(Abs.):60. Hurricane Juan in October brought dozens [I seem to remember 87] of rare living clymene porpoises, normally far offshore off the wide continental shelf, to their deaths on the shell beach at Pt. Au Fer. Excavations they left on the shell ridge showed movements indicating that they died there, exhausted and unable to return to the water. These were so rare that they were hauled back to the Smithsonian. Amazing what they could find with a little homework, but after all they are “uncertain.”

Unfortunately the paper ended with “This case definition will facilitate a better understanding of a dermatopathy that will likely continue to emerge where coastal dolphin communities globally are exposed to sudden or unprecedented environmental change as a result of climatic change or perturbations and anthropogenic habitat degradation.” It had a fairly good review, however, including this– https://doi.org/10.7289/V51C1TT8 which showed that
Katrina brought them into the low salinity Lake Pontchartrain after Katrina, developed skin lesions. There were tea shirts after Juan–“I survived Hurricane Juan three times.” Human fault no doubt as storm went round and round which they do sometime. 1985 was an unusual year, check out Monthly Weather Review.

Seriously, the salinity argument makes no sense; the rain that falls has only recently departed the sea, leaving it’s salts behind. Seems like returning to the sea would only restore its salinity. I realize there could be a local effect but climate change? Please…

” Due to the decreased water salinity brought upon by climate change ”

How THE HELL can the sea possibly become less saline?

”Please try reading the entire article, not just the headline.”

”Due to the decreased water salinity BROUGHT ABOUT BY CLIMATE CHANGE”

“The increasing severity and frequency of storm events like hurricanes and cyclones …”
Once again, the concern is predicated on an unsupported claim, and neither reviewers or publisher required citations for the assertion.

So long and thanks for all the fish…

Hunger Is A Hard Driver

Flawless in their ability to connect any number of dots and always come to the same erroneous conclusion.

So “the climate”, not content with devastating Polar Bear numbers has now turned it’s Sauron’s eye upon the poor Dolphins.

On further investigation it appears to be linked to the management of the Bonnet Carré Spillway.

One rainy year is not climate change.

I recall contradictory forecasts of ultrahigh salinity being a hazard to sea life in previous years .