It’s very open drift ice (1-4/10th concentration) but still: Bear Island (Bjørnøya) in the southern Barents Sea was still surrounded by pack ice at 15 May 2020. As far as I can tell from the Norwegian Ice Service archived ice charts, this hasn’t happened since 2003.

And last week, the island was surrounded by heavy drift ice, which hadn’t happened on 8 May since 1977.

Back in 2003, there were no coloured ice charts but the 4/10th ice around Bear Island in the south is apparent on this chart:

On 8 May – a week after my last post on this topic – the NIS tweeted an image of the ice around Bear Island with this comment added:

Oddly, still no reports of polar bears near the weather station on Bear Island this year but it seems unlikely there we none. More likely, the media has been preoccupied with pandemic news.

Also of note, on 12 May sea ice reached Jan Mayen Island off East Greenland for the first time since April 2004:

Below is the Denmark Strait ice chart for 12 May, but unfortunately one of the grid lines is almost completely obscuring Jan Mayen Island (looks for deep inverted ‘V’ on top of it):

Next week I’ll look at the sea ice situation in the Beaufort Sea and the Canadian Arctic.

OK, good reporting by Dr. Susan. But I’m feeling a chill here, how would you like to be stationed at the weather station on Bear Island? With, hooray!, conditions perfect for polar bears? Big, white, cuddly, polar bears? Wait another minute, is it possible that the climate is cooling down? I’m a golfer, not a kamikaze skier, cooling down does not work for me. I think I’ll take my dogs, jump in the SUV and drive around the block a few times, that should help. Stay sane and safe (turns out social distancing is more preventive than a mask, but double down anyway!).

According to this the arctic sea ice is tracking between the values for 2007 and 2019 at this time of year. Those years had quite similar annual minimums.

Having said the above, you can’t tell much by the ice extent at this time of the year. 2012 had been tracking right on the long term average and then took a dive to reach the record minimum (in recent history).

interested in knowing where you found data for the low in 1974 – from the same site is this plot and does indeed contain 1972 onward data – but no evidence of source of pre 1979 data. this certainly does not show lower sea ice in 1974 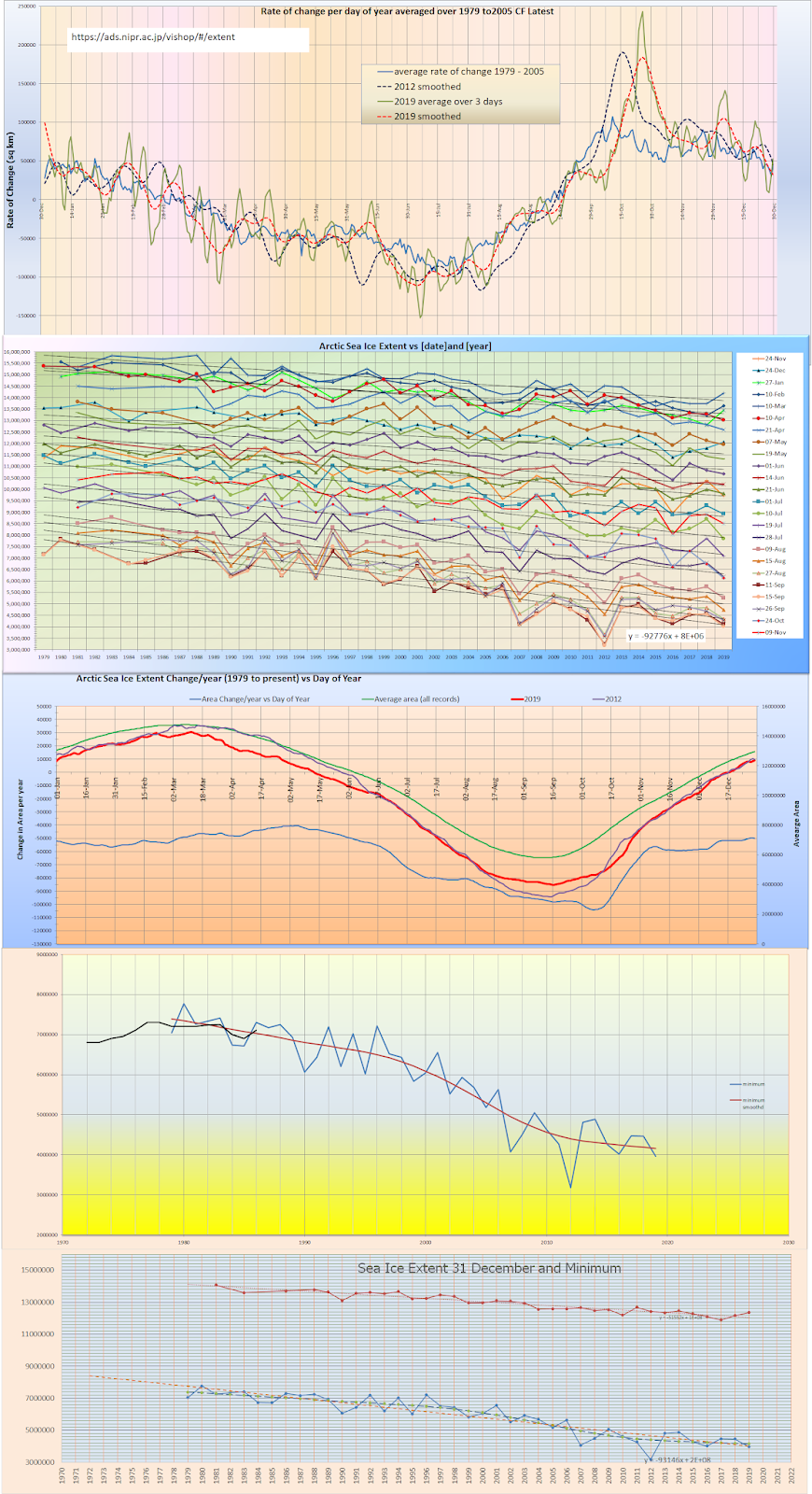 From
Preparing for Climate Change
This shows sea ice extent at around 8 million sq km for the period 1973 to 1987. this compares with around 4e6 for the last minimum. So some disagreement here. 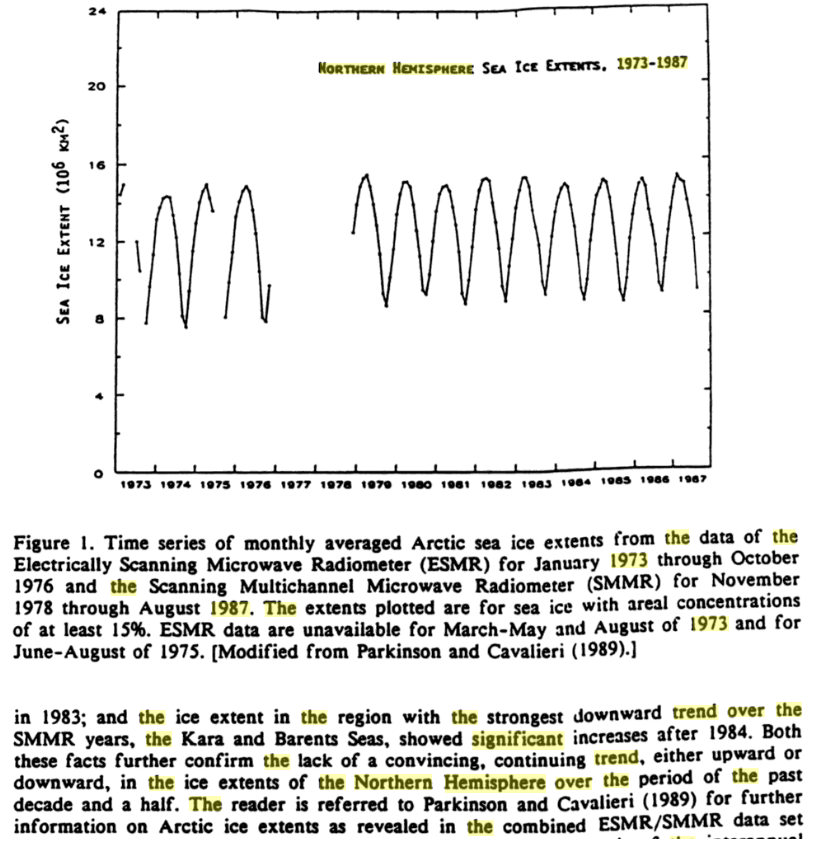 Aren’t you the dishonest poster that claimed Trump said to drink bleach?

What is wrong with you…shame on you.

The correct approach is to bath in bleach, prior to touring the Hamptons. Per Mrs. Chris Coumo

Like Henry Pool, Butt-hurt TDS is what’s wrong with him, among other things.

Derg,
To quote trump
“So, supposing we hit the body with a tremendous – whether it’s ultraviolet or just very powerful light, and I think you said that hasn’t been checked but you’re going to test it.
“And then I said, supposing you brought the light inside of the body, which you can do either through the skin or in some other way. And I think you said you’re going to test that too. Sounds interesting,” the president continued.

“And then I see the disinfectant where it knocks it out in a minute. One minute. And is there a way we can do something like that, by injection inside or almost a cleaning?
“So it’d be interesting to check that.”

the trouble is his speeches are so jumbled and incoherent it is difficult determining the exact message.

“the trouble is his speeches are so jumbled and incoherent it is difficult determining the exact message.”

No, the real trouble is how his speech is distorted by his enemies. I had no problem understanding what Trump was talking about, but then, I don’t hate him.

You are also smart enough not to be a liberal. That gives you an edge when it comes to understanding.

Yes… Trump does cause a lot of his own problems w/ his constant rambling speeches at times. The real issue is how he’s attacked repeatedly and taken out of context by MSM sources. That’s not free speech. That’s slander.

What is Hypochlorous acid? How does our body produce it? Imagine if you had to be aware of it before it would help you.

And is there a way we can do something like that

Isn’t-it just a comparision ? Indeed, not more, not less.
And UV light in the lungs is an effective treatment 😀
https://www.bioworld.com/articles/434719-uv-light-respiratory-catheter-for-covid-19-from-cedars-sinai-seeking-emergency-use

You are a dishonest person

ghalrunt,
People take Warfarin every day, as a blood anticoagulant to reduce their chance of stroke from blood clots. Warfarin is also used as a lethal rat poison. Reasoning minds know the usage of ‘poisons’ in low dosage is fairly common medical practice. Politically motivated individuals choose to misunderstand that.

Does this clarity provide some relief for your jumbled and incoherent political ‘confusions’?

Galsaunt
“And is there a way we can do something like that”.Sounds like a question to me. POTUS WAS asking a QUESTION. Why can you not see that.

One constant with lieberals, if it is at all possible to misconstrue an opponents words, they will.

Trump was addressing a question to acting under Secretary of State Mr W Ryan(homeland Security) during a WH briefing. Read the transcript. It was a question.

Funny because a company in San Diego is doing trials of using light in the lungs to kill viral and bacterial infections. As off the wall as Trump’s comment, asking if doctors are investigating such therapies and advocating injecting bleach are worlds apart. Criticize Trump all you want but don’t make up things to support your argument.

gfront is the one who claimed that since Trump said something different about ChiCom19 in January, compared to what he said in April, this proves he was lying in January.

let us remember these are weather events and not climate. However, it interesting that this last week many English Vineyards have seen their grape blossom frosted as temperatures went below freezing, and in Northern Ireland they had the coldest May night in 40 years. Again, just weather ,but nevertheless interesting to see this natural variability

30 years of consistent weather to make a climate event. Presumably, any deviation will reset the clock.

I don’t really think any of these blips in sea ice, one way or the other, are of note. Yes I clicked on it, against my better judgement.

Anthony, Is it time to update the links on the Sea Ice Page? I think that is a valuable resource, I used to check it often.
In my Firefox browser, most of the graphs end around August last year. If that is difficult to fix, perhaps you could remove the graphs and just provide clickable links to the current sources. Or maybe people using other browsers are getting current graphs when the page loads.

You need to click on the image, it will take you directly to the source of the image.

Another indication ice coverage over the Arctic ocean is in a normal range.

And, bear count is up, the “poster child of the north” is healthy.

But my local newspaper is unrelentless in claiming climate change is “getting worse, accelerating.

This post says there is a debate to be had about what is going on… let alone, “worse” and “accelerating.”

And there is a consistent pattern:

And don’t even think about even-handed reporting in your local newspaper.

The climate in most newsrooms is getting really bad in recent months as the money available for more coffee has completely dried up.

“Another indication ice coverage over the Arctic ocean is in a normal range.”

Basing climate norms on such a miniscule period of time is ludicrous.

Look forward to you making similar comments when some nutter here claims “warming is over” because its been cooler since 2016.

As you all probably know by now, I have a theory that sea ice and NH temperatures are controlled more by ice-sheet albedo, than they are by CO2 or any other terrestrial feedback agent.

If this is so, then the lack of Chinese industrial dust this spring may well have increased NH ice albedo, and thus lead to a slower ice-melt this summer.

It looks like a strong La Niña cycle is developing which may mean Arctic sea ice will increase substantially this winter.

Moreover, a really strange, and dare I say “unprecedented” (sarc/off), 4.5 million KM^2 North Atlantic Cold Blob (my name for it) has been expanding and growing colder for 10 months with no signs of abating anytime soon…. it’s truly bizarre.

In addition, a 50-year Grand Solar Minimum just started, which may also add to further global cooling and perhaps add to Arctic sea ice recovery for many decades… We’ll see.

It’ll be very interesting to see what the preponderance of all these natural global cooling phenomena will have on global temps and Arctic sea ice recovery this winter.

Samurai, I’ve been noticing this sudden turn to cold of late in that area of the ocean – it’s huge and looks to be getting bigger. I like your name for it “the Atlantic cold blob”. Have also noticed ENSO dipped down and the northern polar vortex is still in play up there.

Two polar bears paid a visit to Bear Island this year on March 6th, and were duly photographed by the meteorologists stationed there.

The Greatest Heat Wave In (US) Northwest History?