Sea ice around Svalbard, Norway at the end of February 2020 is way above average, as the graph below shows – with more polar bear habitat now than there has been in two decades.

Some comparison charts below show that the graph above includes some very high ice years in the 1980s (reaching that dotted line above the mean) for which only global charts are available.

However, contrary to suggestions that more Svalbard ice is better for polar bears, there is no evidence that low extent of sea ice habitat in winter or summer over the last two decades harmed polar bear health, reproductive performance, or abundance. In fact, polar bear numbers in 2015 were 42% higher than they were in 2004 (although not a significant increase, statistically speaking) and most bears were found to be in excellent condition. 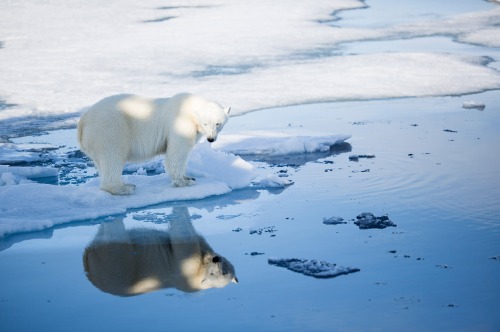 This suggests a return to more extensive ice to the Svalbard region in winter will have little impact on the health of the entire Barents Sea subpopulation, although it might change where pregnant females are able to make their maternity dens if ice forms early enough in the fall. In other words, the population should continue to grow as it has been doing since the bears were protected by international treaty in 1973. 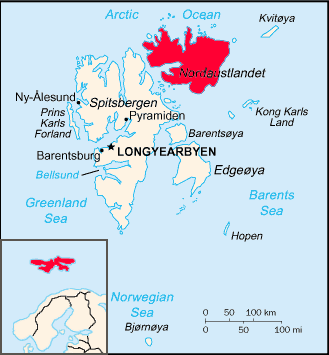 After substantial thick ice persisted into July last summer, at 28 February 2020 Svalbard is virtually surrounded by ice, as is Bear Island to the south (that little patch of grey at the bottom, surround by green and yellow) – the presence of pack ice invariably brings polar bears to Bear Island. There is substantial ice off the west coast (giving polar bears easy access to settlements there) and very close drift ice (red, 9/10-10/10 coverage) is dominant at both north and south ends, which was not true even twenty years ago, as I show below: 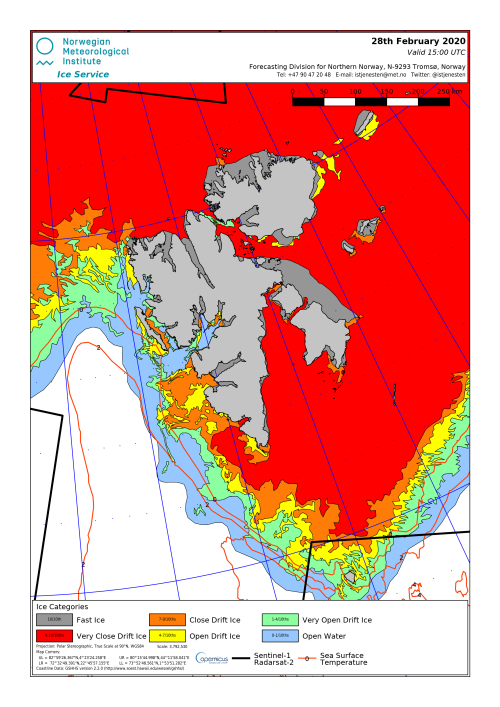 At 2019 for the same date, the ice was not quite as extensive or as concentrated, with open water between Spitzbergen and Nordaustlandet: 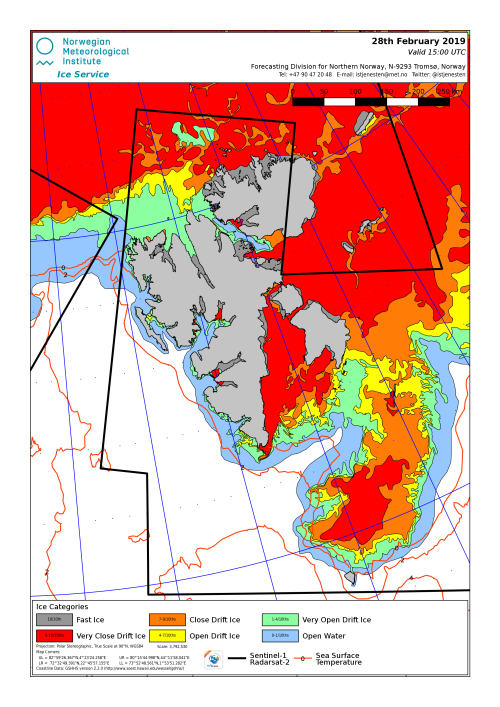 2017 was very odd, with a big patch of open water to the northeast of Nordaustlandet (the first and only time this has occurred in winter, as far as I know): 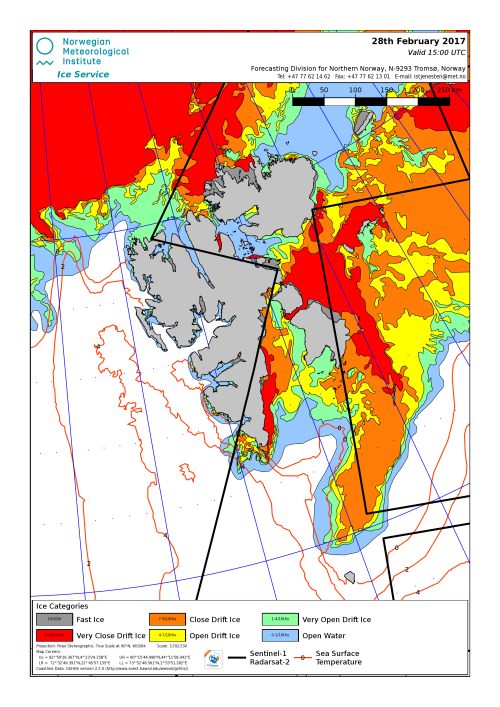 In 2014, so little ice reached south of Svalbard that Bear Island is left off the chart, which was also true back to 2008 (but the island came back to the maps in 2017): 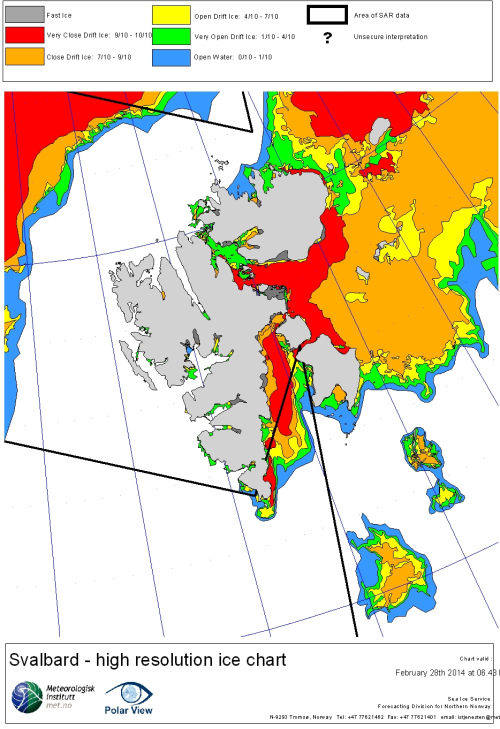 The year with anything close to the amount of ice as this year, at this date, in the Norwegian Ice Service record (which only goes back to 1997) was twenty years ago, in the year 2000 (see chart below). At the end of February 2000, Svalbard was completely surrounded by ice, with a thick band of ice off the west coast and much ice to the south, although the ‘tongue’ of open water extending north of Spitzbergen that has been characteristic of conditions for the last two decades was already present: 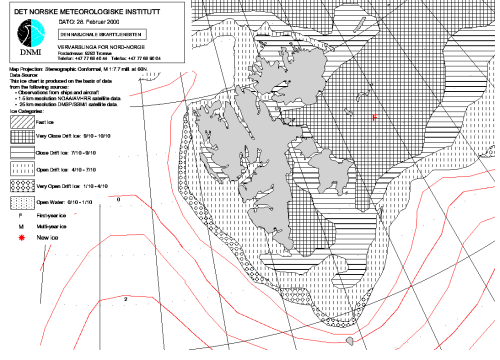 See 2020 below again for comparison with 2000 above. Notice that in 2000 the ice did not reach Bear Island and there was not nearly as much “very close drift ice’ as this year (cross-hatched in the chart above, red in the 2020 chart below), especially to the north and south of Spitzbergen. This year, that prominent ‘tongue’ of open water north of Spitzbergen is gone and there is highly concentrated ice between Spitzbergen and the large northeastern island of Nordaustlandet. Also, in 2020 the ice extends so far south it runs off the bottom of the chart beyond Bear Island:

By 2001 (below), a change in the pattern of sea ice during the winter that had been the norm in the 1980s and 1990s (discussed below) set in. From 2001 onward, there was less ice than usual by the end of February and/or less concentrated ice, especially on the west coast and north of Spitzbergen. While this year’s pattern is a stark reversal of that trend, it will be a few years before we can tell if this is another shift or just yearly variation. 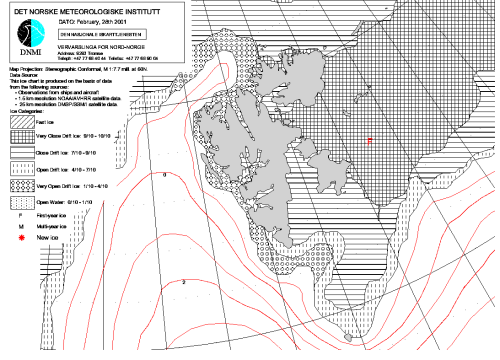 For the period 1979-2020, polar bear habitat around Svalbard at this time of year was probably at its most extensive in 1979, as the NSIDC chart for February shows (below, where the magenta line is the 1981-2010 mean), even while ice in the Bering Sea was below average (more on that in another post): 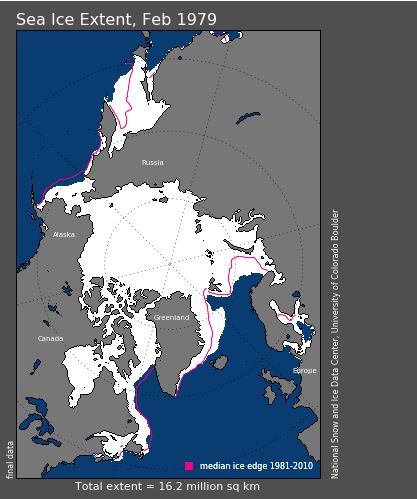 In the 1980s, Svalbard ice varied up and down but generally above the long-term mean (see 1986 below, for example): 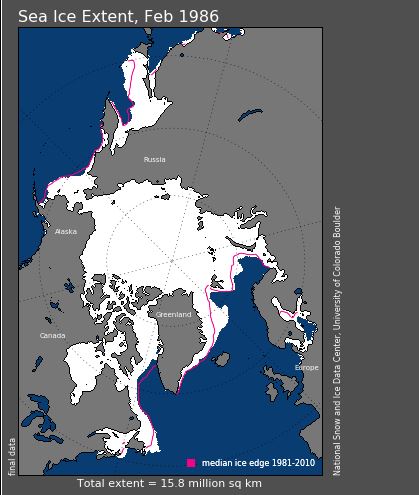 Polar bear health and reproduction values are only available in detailed form back to 1993 but there is not much difference between the 1990s and the 2010s (see graphs below, but also see Larsen 1972; Wiig 1998). The number of females with one year old cubs (mortality is always highest in the first few months and these surveys are done in April, just after mothers with new cubs emerge from their birth dens) has not changed: 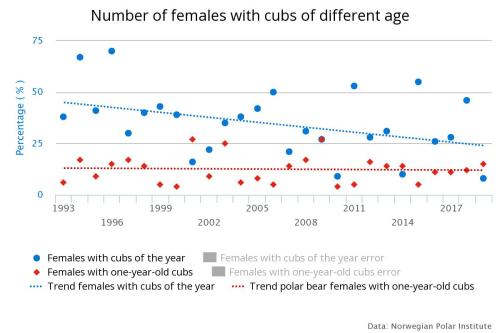 Nor has the weight of adult males changed over this period: 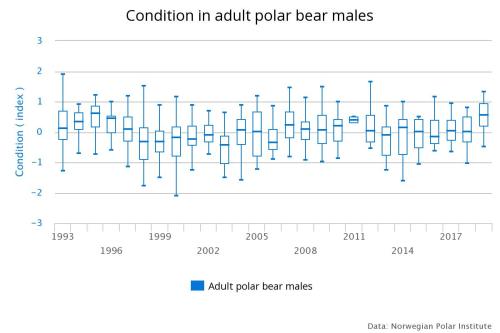 What has changed is the number of females able to make dens on the islands of the west coast of Svalbard (see graph below). 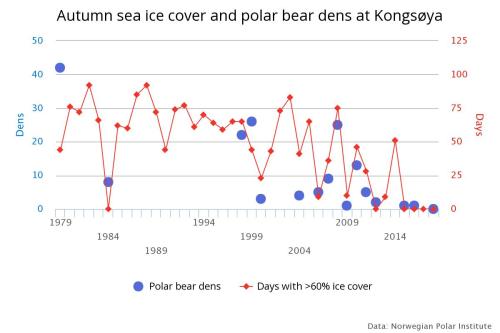 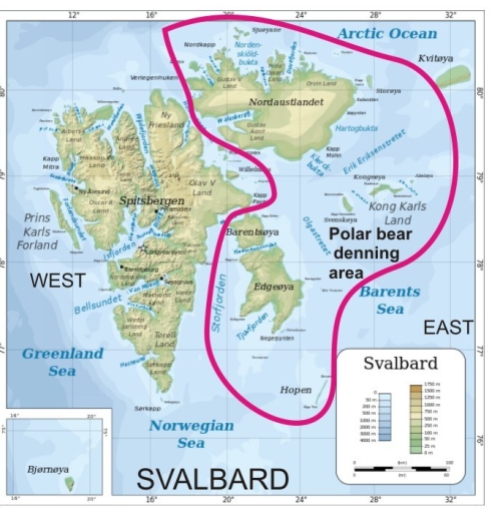 Aars and colleagues found only about 200-250 bears were loyal to the immediate Svalbard region in 2015 (Aars et al. 2017). During 2004 population survey, Aars and colleagues (2009) found about three times more bears in the Russian sector of the Barents Sea than around Svalbard (for a total estimate of about 3,000 bears). This fact is the basis of my suggestion that the 2015 survey that was limited to Svalbard (Aars et al. 2017) could plausibly be extrapolated to give a population estimate for the entire Barents Sea of about 3,750 at 2015 (Crockford 2017, 2019, 2020), still not a statistically significant increase given the methods used.

If Svalbard sea ice habitat continues to vary in the future as it has since 1979, there is no reason that Barents Sea polar bear population growth will not keep on going.