More About the ‘Pale Blue Dot’

Print your very own poster of the ‘Pale Blue Dot’

Learn more about Voyager’s ‘Family Portrait’ of the solar system

For the 30th anniversary of one of the most iconic views from the Voyager mission, NASA’s Jet Propulsion Laboratory in Pasadena, California, is publishing a new version of the image known as the “Pale Blue Dot.”

The updated image uses modern image-processing software and techniques while respecting the intent of those who planned the image. Like the original, the new color view shows Planet Earth as a single, bright blue pixel in the vastness of space. Rays of sunlight scattered within the camera optics stretch across the scene, one of which happens to have intersected dramatically with Earth.

The view was obtained on Feb. 14, 1990, just minutes before Voyager 1’s cameras were intentionally powered off to conserve power and because the probe — along with its sibling, Voyager 2 — would not make close flybys of any other objects during their lifetimes. Shutting down instruments and other systems on the two Voyager spacecraft has been a gradual and ongoing process that has helped enable their longevity. 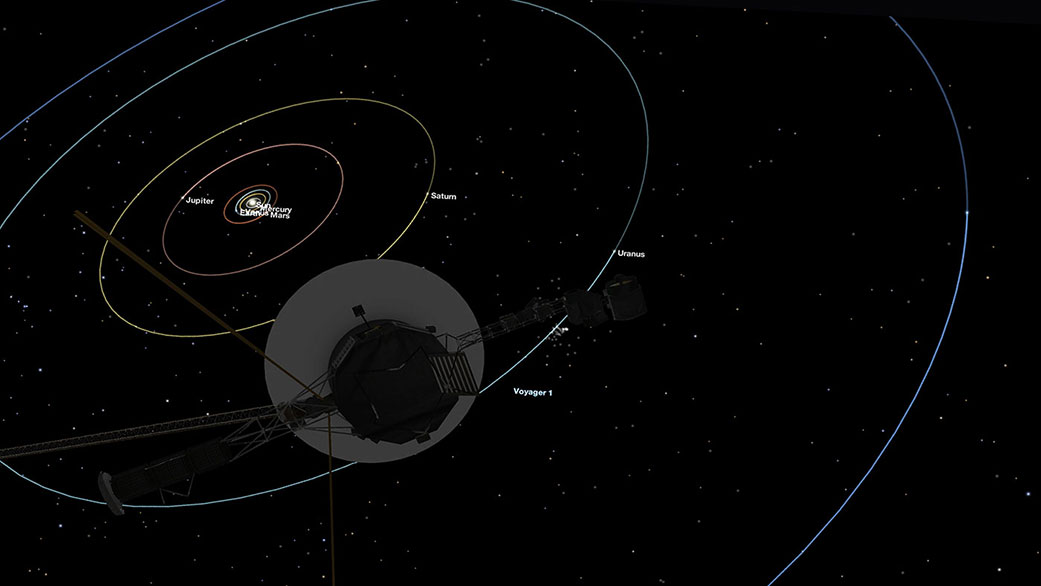 This celebrated Voyager 1 view was part of a series of 60 images designed to produce what the mission called the “Family Portrait of the Solar System.” This sequence of camera-pointing commands returned images of six of the solar system’s planets, as well as the Sun. The Pale Blue Dot view was created using the color images Voyager took of Earth.

The popular name of this view is traced to the title of the 1994 book by Voyager imaging scientist Carl Sagan, who originated the idea of using Voyager’s cameras to image the distant Earth and played a critical role in enabling the family portrait images to be taken.

Additional information about the Pale Blue Dot image is available at:

The original Pale Blue Dot and Family Portrait images are available at:

That fact, apart from all the other superlatives about these amazing 1970s probes, is a testament to the competence of the engineers involved in the design & the care of those who built them! Out beyond the heliopause, they are still providing us with valuable information for a little while yet, hopefully.

I seem to recall reading somewhere that the original rear facing camera was inoperable for much of the journey, and Sagan had to keep pushing for years to get NASA to turn the front facing camera so it would take the photo, do I remember that correctly?

The spacecraft was a long way from home.

I thought it would be a good idea, just after Saturn, to have them take one last glance homeward. From Saturn, the Earth would appear too small for Voyager to make out any detail. Our planet would be just a point of light, a lonely pixel hardly distinguishable from the other points of light Voyager would see: nearby planets, far off suns. But precisely because of the obscurity of our world thus revealed, such a picture might be worth having.

So, here they are: a mosaic of squares laid down on top of the planets in a background smattering of more distant stars. Because of the reflection of sunlight off the spacecraft, the Earth seems to be sitting in a beam of light, as if there were some special significance to this small world; but it’s just an accident of geometry and optics. There is no sign of humans in this picture: not our reworking of the Earth’s surface; not our machines; not ourselves. From this vantage point, our obsession with nationalisms is nowhere in evidence. We are too small. On the scale of worlds, humans are inconsequential: a thin film of life on an obscure and solitary lump of rock and metal.

Consider again that dot. That’s here. That’s home. That’s us. On it, everyone you love, everyone you know, everyone you’ve ever heard of, every human being who ever was lived out their lives. The aggregate of all our joys and sufferings; thousands of confident religions, ideologies and economic doctrines; every hunter and forager; every hero and coward; every creator and destroyer of civilizations; every king and peasant, every young couple in love; every mother and father; hopeful child; inventor and explorer; every teacher of morals; every corrupt politician; every supreme leader; every superstar; every saint and sinner in the history of our species, lived there — on a mote of dust suspended in a sunbeam.

The Earth is a very small stage in a vast cosmic arena.

Think of the endless cruelties visited by the inhabitants of one corner of this pixel on the scarcely distinguishable inhabitants of some other corner. How frequent their misunderstandings; how eager they are to kill one another; how fervent their hatreds. Think of the rivers of blood spilled by all those generals and emperors so that in glory and triumph they could become the momentary masters of a fraction of a dot. Our posturings, our imagined self-importance, the delusion that we have some privileged position in the universe, are challenged by this point of pale light.

Our planet is a lonely speck in the great enveloping cosmic dark. In our obscurity — in all this vastness — there is no hint that help will come from elsewhere to save us from ourselves. Like it or not, for the moment, the Earth is where we make our stand.

It has been said that astronomy is a humbling and character-building experience. There is perhaps no better demonstration of the folly of human conceits than this distant image of our tiny world. It underscores our responsibility to deal more kindly with one another, and to preserve and cherish the only home we’ve ever known.

In the original image I have trouble seeing the Earth. The reprocessed image loses that point.

Space is big. Really big. You just won’t believe how vastly, hugely, mind-bogglingly big it is. I mean, you may think it’s a long way down the road to the chemist, but that’s just peanuts to space. The Hitchhikers Guide to the Galaxy

… and most of it is virtually empty, which is why we call it…. SPACE. 😜

LOL Especially when you take into account how little of an atom contains anything. The universe consists of mostly nothing!!!!!

That was actually a bar, known as the Ceres Crossroads, from The American Astronaut

When cis lunar space becomes the next “boom town”, I intend to capitalize on it. Every boom town needs infrastructure; hotels, stores, etc. I can’t compete with Bob Bigelow on hotels, or Amazon on stores. So I’ve selected watering holes, as yirgach pointed out. I intend to create the first one in the new boom town of cis lunar space. I’ll call it the Cis Boom Bar.

Conversion on back of poster needs editing.
‘This image of Earth is part of a family portrait of our solar system taken by the Voyager 1 spacecraft from more than 4 billion miles (6.4 million kilometers) away. The image inspired the title of scientist Carl Sagan’s 1994 book, “Pale Blue Dot: A Vision of the Human Future in Space,” in which he wrote: “Look again at that dot. That’s here. That’s home. That’s us.”’
Should be billion Kilometers.

It’s funny how they used that picture to try to claim there isn’t anything special about our planet.

I was thinking it was a pity they couldn’t also get the sun in the frame, but maybe that would have caused over-exposure even if it could have been.

Amazing – interstellar space has a molecular composition identical to the atmosphere on Earth – it scatters blue light! And I thought space was black and the Sun was white,

If the moon were one pixel.

I was wondering why I can’t see the moon in that pic — maybe too small. IIRC, one of the Mars landers (maybe Curiosity) took a pic of the earth/moon from the Mars’ night sky & the moon was easily visible.

The sun is burning yellow, with a slightly higher green share in the RGB / red green blue color catalogue.

cina ed, the space IS black because it will NEVER stop falling apart under ongoing quantum mechanic pollution mass gain gravity: the light gets ever slower to reach us.

The sun is burning yellow, with a slightly higher green share in the RGB / red green blue color catalogue.