There’s just no stopping coal in Southeast Asia. Surging investments in wind and solar energy won’t be enough to shake the fuel’s dominance in the region for decades to come, according to the International Energy Agency.

Coal demand is expected to double to almost 400 million tons a year by 2040, the agency said in its Southeast Asia Energy Outlook published Wednesday. That’s 2.5% higher than its forecast from two years ago, even as renewable power capacity is seen more than tripling through 2040.

“Coal is rather resistant because it is affordable,” said Keisuke Sadamori, IEA’s director for energy markets and security. “It’s really hard for Southeast Asian countries to move away from affordable coal immediately.” 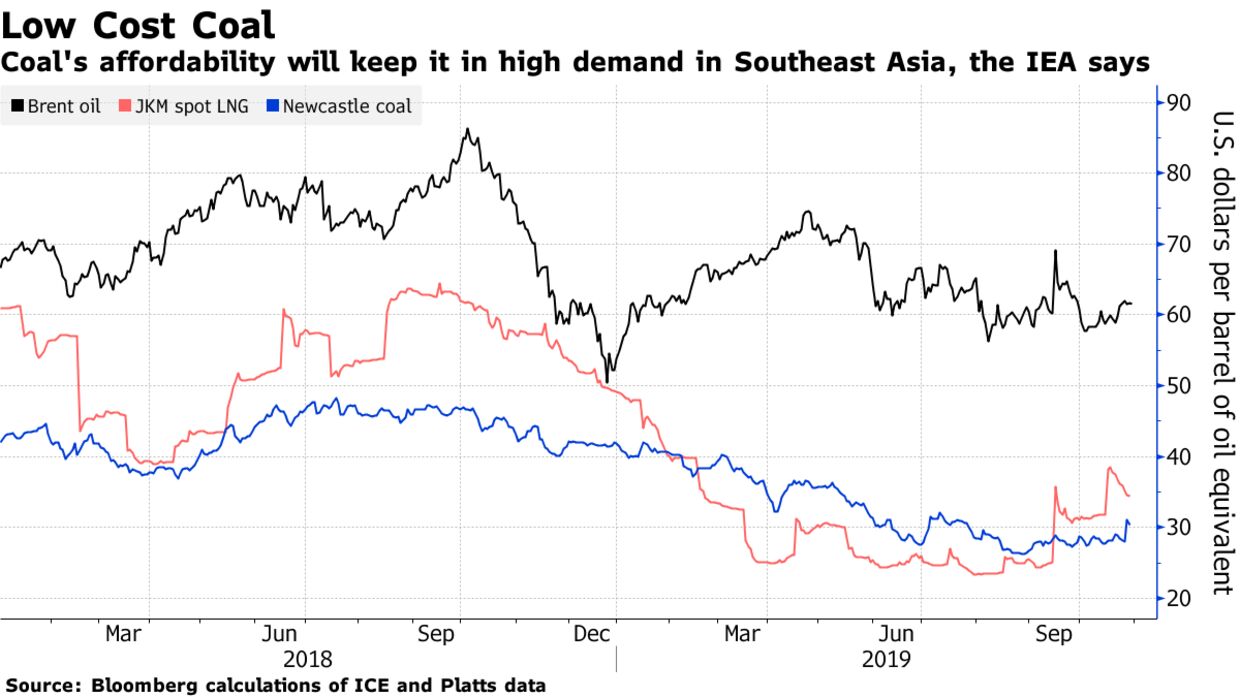 The main reason for coal’s continued importance in the region is expectations for massive overall energy demand growth as populations continue to increase and become wealthier. Even though new renewable energy capacity is forecast to be installed at about twice the rate of coal through 2040, fossil fuels will still represent about 75% of total energy demand in 2040, according to the IEA.

Here in Thailand we desperately need to build more power plants but Greenpeace is over here well funded and paying poor farmers to carry signs and protest against coal. How can we get rid of these guys? Please help.

Shutdown those “special economic” areas for a week see how quickly things will change then.

Cut the grid electricity supply to the greenpeace building. Offer to sell them solar panels.

“Coal is rather resistant because it is affordable,” said Keisuke Sadamori, IEA’s director for energy markets and security.

Yeah, and I bet we’ll see that change in a few years to become less affordable.

That’s why the alarmist/left is so desperate to implement “carbon taxes” – so they can make coal less affordable.

Free wind and solar?
Nothing is more free than coal…you just gather it up from wherever it is sitting.

Many years ago I visited mines in Wyoming’s Powder River Basin. Coal could be loaded onto trains at a cost per tonne as it was sand or any other quarry product. Railing and then barging it down the Mississippi to the Gulf added costs that meant coal shipped from Asia could be landed cheaper at the same Gulf ports. If a miner is able to load coal onto ships almost directly from the mine, even off a long conveyor, the cost of shipping it halfway around the world would be about the same as trucking it a 100 or so kilometers, at least it was back them. If a mine is on a coast as well as the power station it has to be a low cost form of power hard to beat,

0
John in Oz
Reply to  Richard of NZ

Richard – quite correct that wind and sunshine are free, as is coal and oil when they are in the ground.

It’s the cost of transforming it into usable energy that costs.

Please remove your blinkers so that you can see the entire issue.

At least you recognise that reliable baseload energy is a prime requirement.

why should it become less affordable ?

Carbon taxes, green tape, lawfare including making coal more expensive so that wind and solar can be “competitive” as has happened in Australia to name a few tricks of the cultists.

Coal is like LNG, but it’s already compressed, ships easy, and stores easy.

Quite a bit dirtier when burned but that is not due to technical reasons. Oxy-combustion and other clean coal technologies are available.

They just need to realize that CO2 is not s pollutant

If renewables can do the job coal can do, why not save costs by skipping the intermediary step of coal and go directly to renewables? Oh that’s right, they can’t do the job… derp!

…did they just say coal energy is cheaper and more dependable

“Over all, 1,600 coal plants are planned or under construction in 62 countries…”

That’s what they say about everything that doesn’t belong to them. Like when they say Brazil’s forests are “our forests”, and so on.

When i was in uni (some years ago now) there was a poster on the wall that said:

“earth first, we’ll mine the other planets later!“

Still a good slogan for us ‘applied earth scientists’, we used to be called mining engineers but the PC rot started a long time ago.
Anyway, a hearty AUF! To all of you good people.

A mine’s a terrible thing to waste.

Here is a cunning plan from the Green Party world policy strategy forum.
Let’s close down all our coal fired electricity generating plants, blow up all the cooling towers, dismantle all the power line infrastructure from those demolished plants, and hand over all manufacturing to the far East where they are building reliable 24/7 coal fired generating plants.
Message sent to Australia, Great Britain, Canada, the USA and any other previously coal intensive western nation, prepared to be that stupid.

Fluidized-bed combined-cycle coal plants were being developed that greatly reduced/eliminated the size & complexity of the flue-gas treatment (scrubbers, precipitators, catalytic-converters, etc, etc). And that technology advancement has been strangled & stopped by the eco-loons & goobermints.

Good report, CTM. These sort of Reality Checks might traumatize Greta, I hope she will be alright. Fun Fact: Greta can see unicorn farts!

Help me! Britebart just ran a report about Greta giving the evil eye to “climate change deniers” and I made the mistake of looking at the picture, and I’m sure she WAS LOOKING RIGHT AT ME!

It’s when her head starts spinning around you really get worried.

The BIG advantage of coal is that it doesn’t require any advanced technology beyond a pickup truck and some shovels.

When I was in Nei Mongol, a mine run by a “rich person” used pick, shovel donkey and cart. Bicycle for transportation to the work site.

In contrast to coal, a solar powered phone system in Tonga stopped working when the locals noticed the batteries were low and topped them up with urine.

“Mine, baby, mine!” is meant as a pro-coal slogan and is a take off on the great Republican “Drill, baby, drill!” slogan from a couple of years ago – back when Obama said we could never drill our way to lower prices… right before we did!

Clearly the answer is to call a halt on all news about coal and focus the policy and scare on the low-information populations in rich countries. Low information is a powerful resource politically for the Sierra Club and Green Peace and should not go to waste. Besides it’s with us more of the time than a good crisis opportunity as Rahm Emanuel might say.

What would Gretta have us do? Invade? Shut down the power plants by force?

Glare at the coal mines and growl “How Dare You”.

“What would Greta have us do?”

Get Farcebook, and other social media platforms, to silence her critics:

Great news – increased CO2 means more plant growth, more food, more trees. What’s not to like?
0.04% (400 ppm) is way too low. Just return some of that CO2 now stored in coal to where it does good.

I recall that in the late 1950s, the National Coal Board in UK had a slogan that went something like this:

How much the world has changed since then.

As far as I can tell, our current civilization is possible only because of relatively cheap energy. Has anyone ever done a rigorous analysis of that?

Absolutely all fossil fuel types are forecast to increase consumption going forward. If CO2 were really the modern plague shouldn’t the UN be demanding the entire world take part in reduction instead of just the industrial Western economies? “Developing nations” get a pass on saving the world? Anyone that believes AGW is anything other than wealth redistribution is naive.

Affordability is the real sustainability. Asians are smart to resist the West’s latest fad

Wyoming Powder River coal is some of the best quality coal in the world. And producers in Wyoming and also in Montana want to export it to Asia, mainly Japan and S Korea, where there is growing demand.
A West Coast coal export terminal, named the Millennium Bulk Terminal, in Longview, Washington is still tied-up in litigation. Washington democrat Gov Jay Inslee and his Dept of Ecology and eco-friendly state judges have been blocking this interstate commerce project based on claims of train locomotive diesel exhaust causing air and water quality issues. The latest ruling, that the Washington state demanded Millennium’s finances and business reputation filings in discovery were not fulfilled, a clear attempt to intimidate the company that the a state appeals judge okayed, ordering a lower court to reverse its original ruling that the discovery attempt as “arbitrary and capricious.” Total hogwash – the appeals judege was clearly an environmental activist judge.

Meanwhile trains rumble through there everyday carrying cars, airplane parts, and yes, Coal to a nearby paper pulp mill. So their on-going Lawfare attempts to block the coal export are not only unconstitutional, they are disingenuous. And once this works its way through the federal courts, it will likely end up in 4-5 years at the Supreme Court regardless of who is President.
An update on all the litigation as of August 2019 is here: https://www.columbian.com/news/2019/aug/13/despite-lawsuits-millennium-hums-along/

All that is happening now is a lot of lawyers are getting paid to file briefs and counter-briefs as the Federal trail has been delayed by the judge until State level litigation is cleared up. Ultimately though the state will lose as Federal supremacy in interstate commerce will prevail. The constitution’s framers foresaw cases exactly like this when they put the Commerce Clause in the US Constitution. It’s was easy to imagine where one state’s farmers would pressure their state to block competing agriculture commerce from adjacent states through its waterways and trains to reach needed ports for export.

So unless the Congressional Democrat majority and Democrat President can “pack the US Supreme Court” with 4 new liberal justices by then to get the ruling they want, the eco-terrorists and their GreenSlime backers are going to ultimately lose this attempt to shutdown interstate commerce of US produced fossil fuel energy shipments overseas. There’s a lot more riding on maintaining Federal supremacy of interstate commerce than just one proposed coal terminal in Washington State.