In recent weeks and months, there’s been a run of papers—with typical mainstream media misinforming embellishments—about improved estimates of the warming of the oceans…and blog posts about them. One thing common to the papers is the use of the metric zettajoules for ocean heat content—a metric that’s meaningless to most people.

The former National Oceanographic Data Center (NODC) portion of what is now contained under the umbrella of the National Centers for Environmental Information (NCEI) produces a dataset of depth-averaged temperatures for depths of 0-2000 meters, upon which, in part, their Ocean Heat Content data are based, and it’s presented in degrees C. To put deep-ocean warming in perspective, I’m presenting that data in this post.

Sadly, with the government shutdown, the NCEI website is offline, so I can’t provide you with links to additional information about the dataset. That is, we can’t confirm during the shutdown that this dataset is made up primarily of data from ARGO Floats. I did, however, present this same dataset and discuss its foundation in an October 2014 post There is a Wide Range in the Argo-Era Warming (And Cooling) Rates of the Oceans to Depths of 2000 Meters. The WattsUpWithThat cross post is here. Of course, today, the links to the NODC website there will bring you to reminders of the government shutdown.

Note: For those readers who want to investigate further, the KNMI Climate Explorer also has the NODC depth-averaged temperature data for the depths of 0-100 meters and 0-700 meters beginning in 1955. It is unfortunate that the data aren’t subdivided by depths…that is 0-100 meters, and 100-700 meters, and 700-2000 meters. [End note.]

Keep in mind the average depth of Earth’s oceans is about 3,788 meters, so we’re examining a little more than the top half.

Figure 1 presents the NODC depth-averaged temperature anomaly data for the global oceans, from pole to pole, from February 2005 to September 2018. Based on the values of the linear trend line, the temperature of the global oceans for depths of 0-2000 meters has risen about 0.065 deg C since 2005. (As a reminder, 0.065 deg C is read sixty-five one-thousandths of a degree Celsius.) One thing you will note in Figure 1 is all the tiny steps in the data. The reason: The NODC produces that data on a quarterly basis, while KNMI presents it monthly.

Instead of whining about how much the Earth’s oceans have warmed, assuming that increasing levels of CO2 are solely responsible for that warming as is commonly believed, people should be thankful we live on a planet where the oceans can absorb the vast majority of global warming (90%, they say), with so little effect.

Figure 2 presents the data for the Northern and Southern Hemispheres. The data indicate the oceans to depths of 2000 meters in the two hemispheres warmed at similar rates.

DATA FOR THE INDIVIDUAL OCEAN BASINS

BUT, big but, the similarities do not necessarily extend to the individual ocean basins. In the Atlantic, as shown in Figure 3, the South Atlantic warmed at a rate that was noticeably higher than the global rate and 50% higher than the rate of the North Atlantic.

The North Indian Ocean is so small I didn’t bother to divide that basin into hemispheric subsets. The Indian Ocean, overall, warmed at a rate that is comparable to and a little faster than the global rate of 48 one-thousandths of a degree Celsius per decade. See Figure 5. 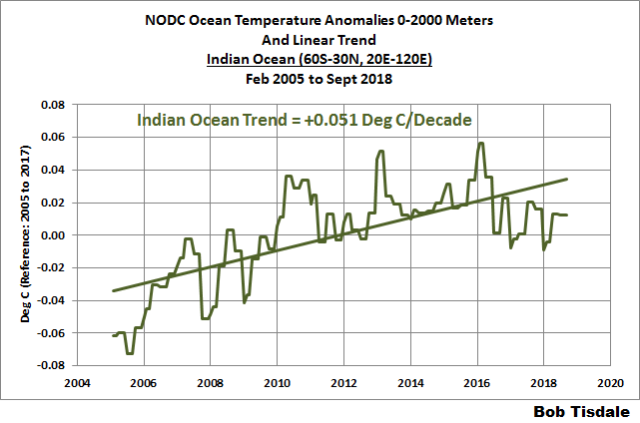 And that brings us to the Arctic and Southern Oceans. Yes, there are parts of both polar ocean basins that are ice free even in their respective winters. And as you can see in Figure 6, the data for the Arctic Ocean can have large variations from year to year. Not surprisingly, the warming rate of the Southern Ocean data is less than half the rate for the global oceans.

A CLOSER LOOK AT THE NORTH PACIFIC DATA

I was interested to see if The Blob had an impact on the depth-averaged temperature data there. Lo and behold, it appears it has.

Note: The Blob was the name given to the area of naturally (weather) warmed ocean (at the surface and to depth) in the eastern extratropical North Pacific. It formed in 2013, coupling with a resilient ridge of high pressure that impacted weather patterns across North America well into 2016. The Blob dissipated in October 2016, as discussed in the post here. (The WattsUpWithThat cross post is here.) Also see the series of posts about The Blob for additional general information.

The impacts of The Blob makes one wonder how often a persistent ridge of high pressure causes a portion the ocean to warm at the surface and to depth, only to go unnoticed because it’s happening in a remote part of the oceans. The primary reason The Blob in the Eastern North Pacific was studied was it was close to the west coast of the U.S. and Canada and was impacting regional weather patterns.

And as you might recall, a NOAA GODAS monthly briefing revealed that the naturally-occurring ocean-warming effects of The Blob reached depths of more than 300 meters. That aspect of The Blob was discussed in the post The BLOB Seems to Be Disappearing at the Surface – But Will It Re-emerge? (WUWT cross post is here.) and further shown with my Figure 2 from that post, which is from page 25 of that NOAA GODAS report. Unfortunately, I can’t find an archived version of that GODAS monthly briefing. Good thing I discussed it in a post and posted a copy of their illustration. [End note.]

To remove any thoughts you might be having that the warming in the Eastern North Pacific occurred gradually with time, see Figure 8, which presents the depth-average temperature anomalies to 2000 meters for that region as bordered by the coordinates of 10N-65N, 150W-100W, for the period of February 2005 to September 2018. It appears as though the combined effects of The Blob and the 2014/15/16 El Niño put an end to the cooling taking place in the Eastern North Pacific from 2005 through 2013.

Does the curve in Figure 8 remind you of another dataset? More on that later in the post.

To capture the warming in the West-Central High-Latitude North Pacific seen in Figure 7, I used the coordinates of 35N-65N, 150E-170W for Figure 9. The warming there more than tripled the global rate of 48 one-thousandths of a deg C per decade. The gradual warming there was interrupted by a noticeable dip and rebound in 2012 and 2013.

Next is the area of extreme cooling east of the Philippines. Normally, in satellite-based sea level trend maps we see very high sea level trends in that part of the western Tropical Pacific—high trends that are associated with leftover subsurface warm water from El Niño events being returned to the western tropical Pacific via off-equatorial Rossby Waves. One might then suspect the high negative trend there in the depth-averaged temperatures to 2000 meters is also a result of a very strong El Niño, specifically the 2014/15/16 El Nino. See Figure 10, in which I’ve used the coordinates of 10N-20N, 120E-165E to capture that cooling area. It sure looks like the high rate of cooling was caused by the dip and rebound related to the 2014/15/16 El Niño as the West Pacific Warm Pool was “drained”.

Figure 11 presents a trend map, globally, for the trends in the temperature anomalies for the depths of 0-2000 meters for the period of 2006 to 2017. The scaling is the same as Figure 7. 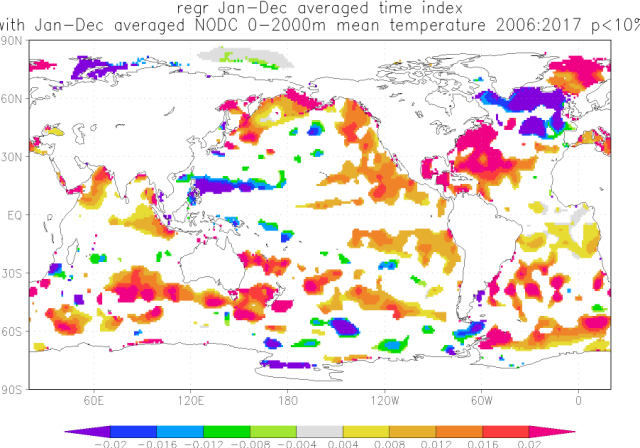 We’ll discuss a couple of those areas in the second part of this post, especially the three obvious regions in the North Atlantic.

I’m also curious about the lines of high subsurface temperature trends south and southwest of Australia, and South of the South Atlantic in the Southern Ocean. Are they gradual high rates of warming like Figure 9 or a period of minor cooling followed by a sudden substantial warming like Figure 8?

We’ll find out next time.

AND NOW FOR SOME FUN

The following is a curiosity. I found it interesting. I’ll let you speculate about it in the comments.

No cheating and looking ahead.

The Mystery Dataset is noisier than the depth-averaged temperature anomalies (0-2000 meters) for the Eastern North Pacific, so I’ve smoothed both with 12-month running mean filters, centered on the 6-month, in Figure 13.

Have you guess the dataset presented as the Mystery Dataset? The answer is here.

Have fun in the comments and enjoy the rest of your day.

Please purchase my recently published ebooks. As many of you know, this year I published 2 ebooks that are available through Amazon in Kindle format: