President Trump frequently acts like he knows what he’s talking about even when it sounds like he doesn’t. That’s a bad trait for anyone, but especially the president of the United States. He’s counted on to provide reliable information that helps the public understand situations and make wise decisions. Instead, Trump’s misstatements put people’s lives in danger. Consider his latest dismissal of climate change.

Confronted with a report issued by 13 federal agencies within his own administration that said climate change left unchecked could ruin the U.S. economy, Trump said he didn’t believe the assessment. Maybe that shouldn’t be surprising, coming from someone who only weeks ago in a 60 Minutes interview said although he didn’t think global warming was a hoax, “I don’t know that it’s man-made.”

It may serve Trump politically to ignore science, but his willful ignorance comes with a price that others will be left to pay. Ignoring climate change means ignoring the role it played in the severity of Hurricane Harvey and other violent storms. It means failing to take steps now that will help limit the loss of lives and property that will occur if Trump’s denial of reality continues to direct this country’s environmental policies.

The Fourth National Climate Assessment said: “Earth’s climate is now changing faster than at any point in the history of modern civilization, primarily as a result of human activities.”

We agree with Trump that people need jobs. However, they also need protection from devastating storms…

Self-serving politicians who suggest the price to slow global warming is too high, or it’s enough that the United States is doing more than China, or insist that climate change isn’t man-made should read the Trump administration’s own report. Then urge your members of Congress to pass new legislation that would fill the dangerous regulation void the president is creating. 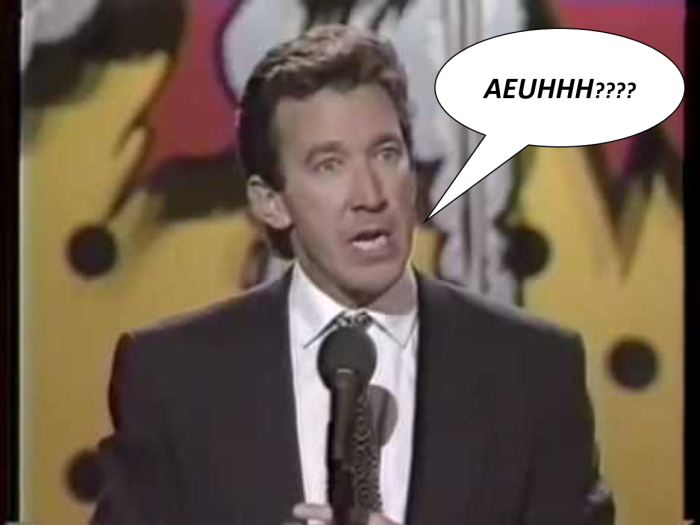 Another gem from the Chronicle…

Science, not oil and gas cheerleading, is needed in Texas classrooms. [Editorial]

ExxonMobil Corp. announced this month that it would join the corporate exodus from an influential conservative nonprofit group following a clash over climate change policy. The nation’s largest oil and gas company provided a strong voice on the green and winning side of a debate over whether or not to push to loosen regulation of greenhouse gases.

Even as ExxonMobil and the world’s other major energy companies have finally started envisioning a lower-carbon world, here in Texas, the Texas Natural Gas Foundation is endorsing a science education curriculum for a future workforce that seems mired in the past. Although industry advocates collaborated with the University of Texas and a state energy office to engage teachers to prepare the curriculum, an investigation by the Austin American-Statesman’s Asher Price found that they worked closely with the curriculum writers and offered edits to the material.

State Rep. Jason Isaac, co-founder and president of the Texas Natural Gas Foundation, told the Statesman he wanted to “get the bias against certain Texas energy resources out of our schools.”

Here’s the problem: it largely ignores climate change and global warming. By relegating a global environmental crisis to a supplementary teacher’s guide, the curriculum turns its back on the facts. Science, not industry cheerleading, is what is needed in the classroom.

First off… There’s a scene in the movie Tropic Thunder that perfectly describes the Chronicle’s editorial board… (Warning: this clip may offend sensitive people)…

Now that I finally found a reason to use that clip in a post, let’s move on…

I can understand the fact that the Houston Chronicle editorial board was almost certainly just parroting what they’ve heard about NCA4 and all the other crap they spouted.  I have almost no doubt that no one on the editorial board has even looked at NCA4 Volume I or Volume II, much less read or understood it.  But… What I can’t understand is the Houston Chronicle’s apparent total ignorance of the city of Houston, Texas.

Say Detroit, and people think cars. Houston is no different. The city’s oil and gas industry is a broad reflection of the industry as a whole, from the oil and gas extraction, oil services, machinery and fabricated metals that make up the upstream sector to the midstream pipeline construction and management; the Houston Ship Channel is home to a major downstream refining and petrochemical complex. This article focuses narrowly on Houston’s upstream oil business and explains why it stands well apart from other oil-producing cities like Midland, Tulsa or Oklahoma City.

When we think of Houston and oil, the better economic model is an oil city, in the same way other cities operate as headquarters and technical centers for their respective industries, such as Detroit and the auto industry, San Jose and tech, New York and finance, and Hollywood as home to the movie industry.

Houston stands apart from other oil-producing cities in both its scale and its daily operations. There are 175,000 Houston-based employees working directly in production, oil services and machinery and fabricated metals, and tens of thousands more serve as suppliers or contractors. Measured statewide, oil-extraction workers based in Houston earn 64.5% of the sector’s payroll in Texas, and almost half of the U.S. total. For oil services, Houston’s share of Texas extraction payrolls is 45.3% and 32.0% for the U.S. (See Table 1 for details on this and other comparisons.)

The best way to think of Houston’s upstream oil sector is as a cluster of headquarters and technical companies like Wall Street, San Jose, Detroit or Hollywood. All these cities operate on similar fundamentals, driven by key decision makers, major suppliers and a deep concentration of technical talent. Once these cities form, the proximity of hundreds of industry-specific companies generates large cost savings for every company that join the cluster, and these lower operating costs becomes the glue that binds these cities together for decades.

Historical accident often plays an important role in the formation of these cities.

For Houston, the historical trigger was Spindletop in 1900, serving as the first of a string of salt dome discoveries in southeast Texas that would bring a huge new wave of American oil production. A series of new discoveries led from Beaumont to Batson, to Sour Lake and on to the Humble oilfield near Houston. Houston emerged as the closest big city with good telegraph and rail connections, the economic development equivalent of today’s internet and big airport.

As any industrial cluster forms, the key actors are a group of decision makers. For Houston and the oil industry these are the oil producers, who decide whether to drill for oil or gas, where to drill, arrange the financing and share the profit or loss. These local producers can be large integrated oil companies like BP, Shell, Chevron or ExxonMobil, or independents like Anadarko, Apache, Burlington Resources or EOG.

Suppliers then join the cluster to be near the decision makers. Chief among Houston’s local suppliers are the big three oil service companies of Baker Hughes, Halliburton and Schlumberger. The service providers work with the producers at the wellhead on each project, carrying out the geology, drilling, downhole testing and ultimately delivering hydrocarbons to wellhead. Houston has long been the heart of a global oil services industry. In the 1960s, when oil was discovered in the North Sea, for example, the British set a public policy goal of becoming a major oil-service provider. When the oil was gone, they could would carry these skills forward to future discoveries. Unfortunately for the British, the Texan lead in experience, patents and a history of work in frontier oil horizons simply could not be overcome.

Closely related to oil services, and often overlapping with services in many companies, is a large local machinery and fabricated metal industry that specializes in oil products. Howard Hughes, for example, patented the rotary bit in 1909, and founded the Sharp Hughes Tool Company on Houston’s Second and Girard Streets. And Houston’s “machine shop row” on Hardy Street was in full swing by the 1920s.

Bill Gilmer is director of the Institute for Regional Forecasting at the University of Houston’s Bauer College of Business. The Institute monitors the Houston and Gulf Coast business cycle, analyzing how oil markets, the national economy and global expansion influence the regional economy. Gilmer previously served the Federal Reserve Bank of Dallas for 23 years, retiring from the bank as a Senior Economist and Vice President.

We represent University of Houston students and faculty, appointed as UH Energy Fellows from across the energy-related colleges to ensure the subject is covered from a wide array of viewpoints as we seek to engage the public, other thought leaders and policymakers in a national conversation about energy. The University offers expertise in a range of energy-related areas, including international natural resource law and development, research into the science, engineering, economics, logistics and policy surrounding hydraulic fracturing and unconventional resources, offshore drilling, alternative energy, sustainability and energy conservation. In addition, UH offers the nation’s first subsea engineering program, a minor in Energy and Sustainability and is a research powerhouse with two energy related federally funded national research centers – one researching high-temperature superconductivity and electric energy storage and one concerned with the sustainable and safe development of energy resources in the Gulf of Mexico.

UH Energy is the University of Houston’s hub for energy education, research and technology incubation, working to shape the energy future and forge new business approaches in the energy industry.

Here are the tables from Dr. Gilmer’s article:

On top of the fact that oil industry jobs are among the highest paying in Houston, eight of Houston’s top twenty-five employers are oil, oilfield service or petrochemical companies.

Note that The Houston Chronicle is not on this list.  Houston clearly could afford to lose the Chronicle and cannot afford to accept most of the alternatives to President Trump’s view of climate change. 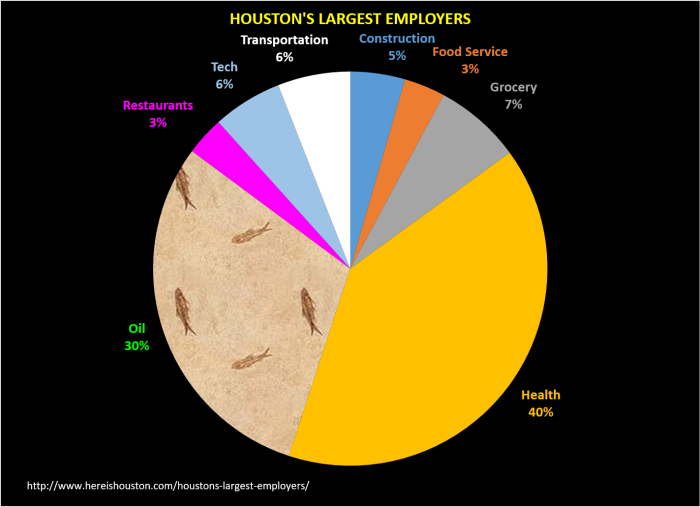