This appeared on Twitter yesterday, an ice sculpture in (sourced from New Dehli India, but may be in Seoul, Korea, due to Korean writing on the plaque h/t to John Tillman) on the street, brought to my attention by Devin Narang:

Time to wake up and smell the coffee: climate change it’s real pic.twitter.com/Aq0dfpE6IH

The video depicts a mother and child. The child is made of ice, the mother is not. The plaque below the statues say this: 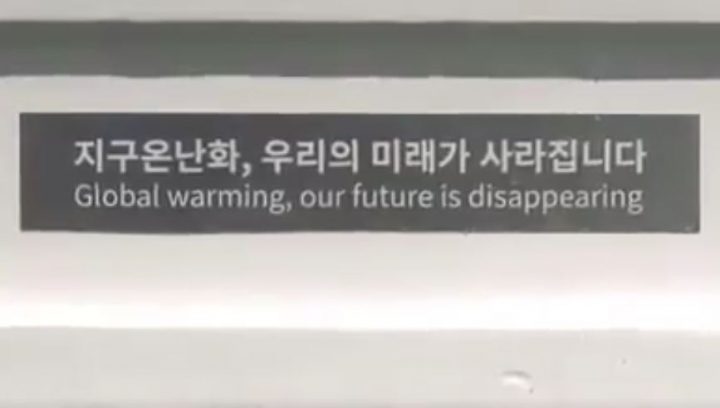 You’d have to be pretty gullible to think this ice melting in the summer heat has anything to do with any real threat of global warming, and while I realize it’s pure symbolism, it’s also not rooted in any reality.

But then again, consider the source.

Global warming, our future cash transfers are not here…yet

Why does a statue in India bear an inscription in Hangul, the Korean alphabet?

Good question. I’m going on the fact that that original Tweet came from New Dehli, but that may be erroneous. I’ll look further.

It’s fuzzy, but the sign in the BG also appears to be in Hangul.

The majority of people in the video seems to be Korean, and it looks more like Seoul than Delhi.

Pure emotionalism. Goebbels would be proud.

Indeed. However it is better than having the kid blowing up with blood spatter and guts all over. Still the kid dies (melts)… What is it with liberals? Do they just hate people, and especially kids.

No, no. The kid doesn’t die. He’s reincarnated as pink and green ice cubes at a party.

Absolutely. The progressive dream future is a world filled with centenarians hopped up on anti-aging products and dumbed down on legal pot. They are all self actualizing as they self-congratulate for saving the world by not having any children and humanity fades into the sunset in a THC laced cloud of ennui

Geez that would have happened up here in central Ontario, Canada, today. However, the temp may hit zero C tonight so it may have survived. Zero C is unusually cool at this time of year here.

In other climate justice news for the gullible sheep:

Or made BETTER because of climate change. After all, this is very near where Hurricane Camille came ashore 49 years ago. So the tropical cyclones seem to be getting weaker. Thank, Global Warming.

Yes, and she hit in August.

I would not like to live in the “Paranoid Hell” that these Greenypieces appear to live in.

The song from Olaf, the snowman in the movie “Frozen”, comes to mind…

A picture/ video can tell a thousand lies. If it was Greenpeace then they are obviously getting very desperate and potentially dangerous to boot.

EVERY missive from the Enviros is a Daisy Commercial. BTW has Trump announced the date WWIII begins? If it’s this week I won’t mow my lawn.

WWIII? Umm, I believe it’s the 4th Tuesday of the 12th week in October.

Shall I make a reservation for you?

I am absolutely gobsmacked by this announcement!

Ice should not melt in summer!!! Ever. The Earth is slowly being roasted alive!!

Quick! Send money!! Now!!! LOTS OF MONEY!!! because I need a cushy office and a glorious computer with all sorts of hot dog stuff on it, and a reefer full of food and drinks!!!!!

Was that panicky enough, or should I bump it up another notch?

Thank you, D.J. Hawkins! My job here is done!

WONDERFUL entertainment (from the LEFT) the nutty stuff they think of, what a view in to their minds, their hypocritical, fear-mongering dystopian minds.

Sob If only somebody had put Frosty’s top hat on him.

Talk about utter wastes of energy to accomplish zero. All of that ice, wasted.

All the believers do is affirm their complete ignorance….

Frozen CO2 “melts” in winter—maybe they could have faked us out better with a solid CO2 statue. Shorter life span, of course, but more dramatic.

This video is inspirational. It has inspired me with an idea to do an ice sculpture of a climate scientist with a penis made of ice, set in the hot sun of a dessert. Below will be a caption that reads, “Global warming, the hard truth of it is nonexistent.”

Critical Comments by Happer and Lindzen on SEC Rule