In Part A of the Great Debate series (see here) we discussed Dr. David Karoly’s and Dr. William Happer’s arguments regarding how unusual recent global warming is and how we know the recent observed increase in CO2 is due to human activities. In Part B we examined their thoughts on the amount of warming caused by greenhouse gas emissions and the accuracy of the calculation. In Part C we discussed the dangers of global warming, the calculation of the vital value of ECS (the equilibrium climate sensitivity to a doubling of CO2), and discuss the need to do something about climate change. In this final part of the series I will summarize the debate and provide my thoughts.

“Science has established that it is virtually certain that increases of atmospheric CO2 due to burning of fossil fuels will cause climate change that will have substantial adverse impacts on humanity and on natural systems. Therefore, immediate stringent measures to suppress the burning of fossil fuels are both justified and necessary.”

“Climate models don’t work. They have predicted several times more warming from greenhouse gas increases than has been observed.”

In a nut shell, both agree the world is warming, and CO2 and other greenhouse gases have contributed to the warming. Karoly and Tamblyn think the recent warming is unusual, but Happer and the historical record suggest it isn’t, or if it is, there is certainly no evidence it is unusual. Rapid rises of more than one-degree are common in ice core records, three geologically recent examples that occur at about the same time in Greenland and Antarctica are shown in Table 1. 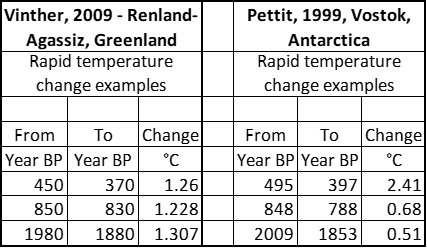 Table 1. Examples of one degree increases in temperature in 100 years or less, in these examples increases occurred in both Greenland and Antarctic ice cores at about the same time. Source: (May 2018). Year BP means years before 1950.

Tamblyn, Karoly and Happer agree that the contribution of human emissions to modern warming cannot be measured and must be computed with climate models. Tablyn and Karoly think the models are accurate and use the model results to predict dangers to mankind and the planet. Happer disagrees and provides evidence the models are not accurate and compute too much warming. He also provides us with an elegant and novel calculation of the direct impact of CO2 on temperature of about one-degree C per doubling of CO2 (the “CS”), which if correct, predicts that it will take 600 years for temperatures to rise two-degrees. His calculation is net of any feedbacks, but as he points out we really don’t know if the net feedback is positive or negative.

The debate clarifies a key point. The dangers due to man-made climate change hinge on CS, is it about three as Tamblyn and Karoly believe or is it about one as Happer believes? Is warming of two degrees a hazard or will we be fine up to higher temperatures? Even the assertion that 2° is a dangerous temperature rise is speculative and controversial. The current global average temperature is about 15 degrees, but over the last 500 million years the overall average surface temperature has been estimated by Christopher Scotese to be about 20 degrees, five degrees higher than today (Scotese 2015).

Karoly and Happer have significant and substantive disagreements on CS and on the temperature-rise that is dangerous. All the speculative hazards to mankind and the planet hinge on the value of CS used to predict future warming and on the temperature increase considered to be dangerous. Currently, as Happer and others have pointed out, warming and the additional CO2 in the atmosphere are beneficial and they will continue to be beneficial for many more years. The dangers hinge entirely on model predictions based on assumed and unvalidated values of CS that are probably too high, according to Happer. They also rely on an assumed “tipping point” of 2°C above either today’s average temperature or the 19th century temperature, depending upon who is speaking.

Thus, it appears that Karoly’s initial statement that human-caused climate change is “virtually certain” to be dangerous and we must use “immediate, stringent measures” to deal with it is unproven (see Part A).

Happer’s initial statement (in Part A) was, in part:

“There is no scientific basis for the claim that increases in atmospheric CO2 due to burning of fossil fuels will cause climate change that will have substantial adverse impacts on humanity and natural systems.”

This can be considered true. Because all the proposed hazards of CO2 hinge on a poorly estimated value, the climate sensitivity (CS) to CO2. Low values of CS are no problem. High values may be a problem, but no one knows what the correct value is.

The last part of Happer’s initial statement is:

“Any resulting climate change will be moderate, and there will be very major benefits to agriculture and other plant life.”

Because the CS is so poorly understood, the first part of this statement is stated too firmly. Given what we read in the debate materials and the references, I think we can safely say any human-caused climate change will probably be moderate. The last part of the statement is fine, we can be certain that there will be major benefits to agriculture and other plant life, that is already happening.

Generally, the debate was very informative and interesting. The organization of the documents is poor, and they are quite long and repetitive. I’ve tried to fix these problems here. The material will not be new to many readers, but Karoly and Happer are well-known, credible experts and that gives weight to their remarks and opinions. Tamblyn’s arguments are weaker than those of the other two and are mostly conjecture, using unstated and unrealistic assumed temperature increases with little foundation. Happer describes them well in his final reply:

“Mr. Tamblyn has produced not so much a response to my Statement, as a primer on global-warming alarmism, a whole list of scary talking points and computer-generated graphs, with occasional asides to deplore how obtuse I am for not understanding the gravity of this supposedly existential threat to the planet or how ignorant I am of basic physics.”

That last bit had me chuckling, Professor Happer is probably the most accomplished and brilliant physicist alive today. Tamblyn did not pick up where Karoly left off and chose to begin a new debate by listing a lot of very speculative claims of the dangers of warming. Most of these “dangers” involved warming rates and amounts that are completely unrealistic. Unfortunately for us, what he adds is mostly irrelevant to the original discussion between Happer and Karoly. Thus, Happer had to defend his views in two separate debates, but he soldiered on and did quite well in both. It is a shame that Karoly backed out in the middle of the debate, had he stayed, the result would have been better. As it is we gained something, we found out it is all about how much and how fast it is warming. In my opinion, Happer won the debate, both of them.