GOAL MET! THANKS TO EVERYONE, see the update from Peter Ridd here. See UPDATE below: JCU, feeling some blowback, issues a press release on a Sunday.

WUWT readers may recall that WUWT spearheaded an effort to help Ridd’s legal fund, earning nearly $100,000 in donations in two days. According to Ridd, in an email to me:

I am astonished, very relieved and most importantly incredibly grateful for the support. I would also particularly like to thank Anthony, Jennifer Marohasy, Jo Nova, Willie Soon, Benny Peiser and many others for getting the issue up on blogs and spreading the word.

Here are the latest details, Ridd says in an email:

With the assistance from the Institute of Public Affairs we have appointed a Queens Counsel lawyer (absolute top gun lawyer in the British/Australian system) and we are still confident that we will win the case. Firing me has merely doubled the bet.

He posted this on his GoFundMe page early this morning:

Just an update of my battle

On 2 May, 2018, I received a letter from James Cook University (JCU) terminating my employment. JCU have sacked me because I dared to fight the university and speak the truth about science and the Great Barrier Reef.

Shortly after I went public with the GoFundMe campaign to which you donated in February the university presented me with a further set of misconduct allegations, which alleged that I acted inappropriately by talking about the case and have now ended my employment.

I will be fighting their employment termination, alongside the original 25 charges behind JCU’s ‘final censure’ last year.

As a consequence of the sacking, and the new misconduct allegations, my legal costs have substantially increased. JCU appears to be willing to spend their near unlimited legal resources fighting me. In the name of honesty and truth in science, we must fight back. We have an excellent legal team and are confident that we can win the legal case.

I feel extremely indebted to all those who have given so generously. I was blown away by the number of people who supported me, and I had hoped that more funding would not be necessary. Sadly, however circumstances have changed.

I have contributed another $15000 of my own money, in addition to the $24000k I have already spent. However, based on the growing complexity of the case, we will need to raise an additional $159000. It is a bit frightening, but we have reopened the GoFundMe site to receive more donations.

You have already contributed generously so all I ask of you is to help spread the word to expand the number of people who are helping.

I know there were many who were unable to donate the first time – including my own Mum – due to the speed we reached the original target of $95K.

For additional background on all the new allegations from JCU, I have uploaded all the documentation so that you can judge JCU’s allegations for yourself if you wish. https://platogbr.wordpress.com/fired-details/

In summary, JCU (1) objects to my criticism of the earlier allegations; (2) criticised my involvement with the Institute of Public Affairs; and (3) objects to me not remaining silent. The facts of the matter are simple: (1) the earlier allegations were an unreasonable infringement on my academic freedom, I was well within my rights to criticise JCU; (2) I have never been paid by the IPA, other than some initial support for my legal case and reimbursement for flights and hotels related to speaking arrangements which is normal academic practice; and (3) I am well within my rights, as stated by my employment agreement, to speak publicly about disciplinary proceedings. 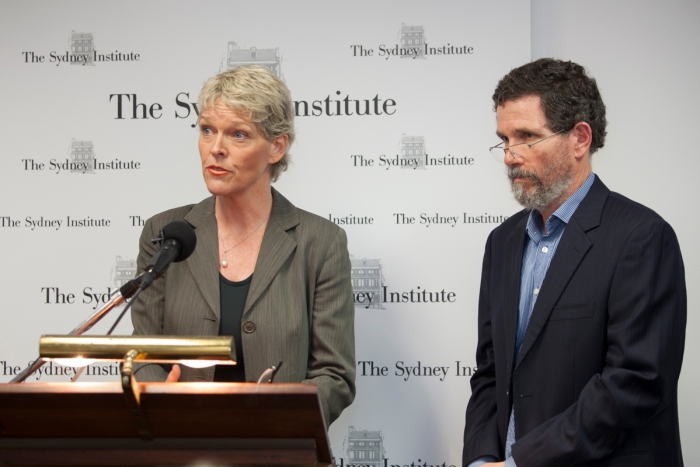 Peter Ridd and Jennifer Marohasy speaking about the need for quality assurance in science last November in Sydney.

BACK in 2016, when I asked Peter Ridd if he would write a chapter for the book I was editing I could not possibly have envisaged it would contribute to the end of his thirty-year career as a university professor.

Since Peter was fired on 2 May 2018, James Cook University has attempted to remove all trace of this association: scrubbing him completely from their website.

But facts don’t cease to exist because they are removed from a website. The university has never challenged the veracity of Peter’s legitimate claims about the quality of much of the reef science: science on which billions of dollars of taxpayer-funded research is being squandered. These issues are not going away.

Just yesterday (Friday 18 May), Peter lodged papers in the Australian Federal Court. He is going to fight for his job back!

If you care about the truth, science and academic freedom, please donate to help bring this important case to court.

It doesn’t matter how little or how much you donate. Just make sure you are a part of this important effort by donating to Peter’s GoFundMe campaign.

There is more information at my blog, and a chart showing how much some reef researchers have fudged the figures.

This action is seriously wrong, and the mark of a collection of cowards engaged in group-think. It sets precedent for the death of free speech, free ideas, and freedom to interpret science where the data leads you.

Because they are in the wrong, JCU will, in the end, be forced to capitulate. Let’s make them miserable using every legal method available. – Anthony