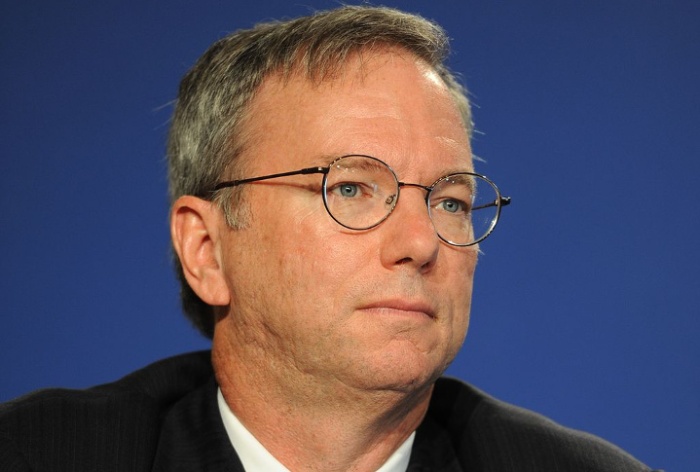 h/t Breitbart – Google Chairman Eric Schmidt, a hardcore climate advocate who has been heavily involved in Google’s Truth Algorithm, an effort to filter “fake” material from Google search results, has stepped down as chairman to focus more time on his personal interests.

MOUNTAIN VIEW, Calif. (December 21, 2017) – Alphabet Inc. (NASDAQ: GOOG, GOOGL) today announced that, as of its next regular board meeting in January 2018, Eric Schmidt will be transitioning from his position as Executive Chairman of the Board of Directors, becoming a technical advisor to the company while continuing to serve on its board.

“Since 2001, Eric has provided us with business and engineering expertise and a clear vision about the future of technology,” said Larry Page, CEO of Alphabet. “Continuing his 17 years of service to the company, he’ll now be helping us as a technical advisor on science and technology issues. I’m incredibly excited about the progress our companies are making, and about the strong leaders who are driving that innovation.”

“Larry, Sergey, Sundar and I all believe that the time is right in Alphabet’s evolution for this transition. The Alphabet structure is working well, and Google and the Other Bets are thriving,” said Eric Schmidt. “In recent years, I’ve been spending a lot of my time on science and technology issues, and philanthropy, and I plan to expand that work.”

“Over 17 years, Eric has been tremendously effective and tireless in guiding our Board, particularly as we restructured from Google to Alphabet. He’ll now be able to bring that same focus and energy to his other passions, while continuing to advise Alphabet,” said John Hennessy, a member of Alphabet’s Board since 2004 and the lead independent director since 2007.

The company anticipates that the Board will appoint a non-executive chairman.

Larry Page and Sergey Brin founded Google in September 1998. Since then, the company has grown to more than 70,000 employees worldwide, with a wide range of popular products and platforms like Search, Maps, Ads, Gmail, Android, Chrome, and YouTube. In October 2015, Alphabet became the parent holding company of Google. You can read more about Alphabet’s mission here.

Eric Schmidt is very politically active. In 2016 Wikileaks revealed Schmidt was working closely with the Clinton Campaign, part of an effort by Silicon Valley tech giants to ensure a Democrat Win in the 2016 Presidential Election.

… It was revealed by whistleblowing service WikiLeaks in 2016 that Schmidt worked with the Clinton campaign. An attachment to an email written by Teddy Goff, a former Obama campaign digital director that also worked for the Clinton campaign, appeared to discuss “Working relationships with Google, Facebook, Apple, and other technology companies.” Goff further stated that the Clinton campaign had “begun having discreet conversations with some of these companies.” The memo seemed to have been drafted sometime in October 2014, at least six months prior to Clinton announcing her run for the presidency.

Throughout the memo, Goff repeatedly referred to “Eric Schmidt’s group,” at one point saying, “I have been kept apprised of the work being done by Eric Schmidt’s group and others working directly and indirectly with your team. [emphasis added] On the whole, I am comfortable with where we stand and confident in our roadmap to launch day and beyond.” Schmidt also ran The Groundwork, the technology vendor for Clinton’s campaign. …

Schmidt is a hardcore climate advocate. In 2014 he accused the American Legislative Exchange Council (ALEC) of lying about climate change.

… Google was a member company of ALEC, earning the ire of progressives, as has every corporate member of the group. As noted by liberal publication ThinkProgress, participation and funding of ALEC by Google seemed at odds with the company’s heavy investments in renewable energy, and Mr. Schmidt apparently agrees.

In an interview on The Diane Rehm Show on NPR, Mr. Schmidt said, “Everyone understands climate change is occurring and the people who oppose it are really hurting our children and our grandchildren and making the world a much worse place. And so we should not be aligned with such people—they’re just, they’re just literally lying.”

Silicon Valley has a reputation for progressive idealogy on climate change, the environment, and equality. Mr. Schmidt’s comments put Google more firmly in that camp.

Eric Schmidt was also connected to the 2015 Silicon Valley anti-trust settlement, a class action by tech workers who claimed wages and opportunities had been artificially depressed by an alleged secret agreement between major tech firms not to poach each other’s workers.

Calling the deal “fair and reasonable,” a federal judge late Wednesday signed off on a $415 million settlement that ends a five-year legal battle over alleged illegal hiring practices in Silicon Valley.

In a 15-page order that has been expected since she tentatively approved the pact this spring, U.S. District Judge Lucy Koh put an end to antitrust claims against Apple, Adobe Systems, Google and Intel over allegations that they entered into secret agreements not to raid each others’ workforces. The deal avoided a trial that could have exposed embarrassing allegations that CEOs of those valley powers, including late Apple leader Steve Jobs and then Google CEO Eric Schmidt, agreed in emails and other correspondence not to poach from rivals.

The estimated 64,000 tech workers covered by the claims were notified of the settlement terms during the summer, prompting some to object. But Koh determined the opposition — just 11 class members — amounted to a small percentage of the class action, and that the benefits of the deal, including avoiding the risk and expense of a trial, outweighed any concerns. The overall settlement provides payouts of about $5,000 per employee.

I think I’m on pretty firm ground when I suggest Eric Schmidt is likely to devote a lot of time and money in the future to attacking climate skeptics.

Given Eric Schmidt’s personal financial resources and his history of political activism, and the fact he doesn’t come across as a complete alien like some Silicon Valley tech leaders, it would be no surprise to see Eric Schmidt running on a green globalist platform as the Democrat Presidential Candidate for 2020.

127 thoughts on “Google Chairman Stepping Down to Fight Climate Skepticism? Or Run for President?”