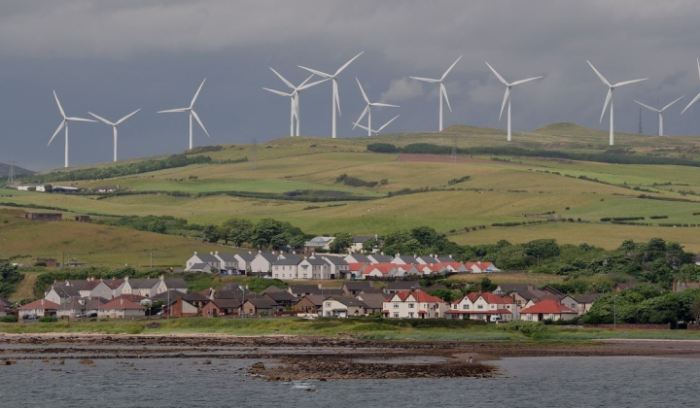 h/t JoNova – According to Professor Jack Ponton of Edinburgh University, an additional 16,000 wind turbines covering 90,000 square kilometres (35,000 square miles) will be required to charge Britain’s electric cars, if Britain converts to an all electric car fleet.

SCOTLAND would need to be entirely covered by wind farms in order to power all of Britain’s electric cars, according to a leading academic.

Jack Ponton, emeritus professor of engineering at Edinburgh University, said another 16,000 turbines would be required in order to replace petrol and diesel cars with electric vehicles.

First Minister Nicola Sturgeon has pledged to phase out the internal combustion engine by 2032 – eight years ahead of the rest of the UK.

But Prof Ponton said that, even if the issues of power generation and charging points were sorted out, the National Grid could simply not cope with the increased demand.

He said: “It is a nice idea as electric cars are much more efficient, cleaner and actually simpler devices than the current internal combustion engine vehicles.

“Technically, it is an excellent idea. But the problem starts when you begin to think, ‘Where are you going to get the energy to run them?’.

“I’ve seen three different estimates for the amount of new generating capacity that we would need if were going to have all the cars in Britain running on electricity.

“The most detailed calculation says we’d be looking at five Hinkley nuclear stations to run this. It would be the best way, the most efficient way to get electricity because nuclear power stations can run 90 per cent of the time.

“If you want to do this with wind turbines, you are talking about 16,000 more wind turbines, four times as many as we have at the moment, and I’ve estimated that would occupy some 90,000 square kilometres, which is approximately the size of Scotland.”

This isn’t the first time British academics have run the numbers and demonstrated that renewables are utterly impractical. Back in 2008, Professor David J C MacKay of the Cambridge University Department of Physics, who also holds a PHD in computation from Caltech, upset advocates by running a few numbers and demonstrating how ridiculously inadequate renewables are to the task of powering Britain.

The renewables juggernaut rolls on regardless. Years from now, historians will marvel at how such eyewatering sums of public money were squandered on such a useless energy solution, and how people who claim they care about nature were seduced into covering the landscape with bird and bat killing industrial monstrosities.