Existing studies of the recent warming hiatus over land are primarily based on the average of daily minimum and maximum temperatures (T2). This study compared regional warming rates of mean temperature based on T2 and T24 calculated from hourly observations available from 1998 to 2013. Both T2 and T24 show that the warming hiatus over land is apparent in the mid-latitudes of North America and Eurasia, especially in cold seasons, which is closely associated with the negative North Atlantic Oscillation (NAO) and Arctic Oscillation (AO) and cold air propagation by the Arctic-original northerly wind anomaly into mid-latitudes. However, the warming rates of T2 and T24 are significantly different at regional and seasonal scales because T2 only samples air temperature twice daily and cannot accurately reflect land-atmosphere and incoming radiation variations in the temperature diurnal cycle. The trend has a standard deviation of 0.43 °C/decade for T2 and 0.41 °C/decade for T24, and 0.38 °C/decade for their trend difference in 5° × 5° grids. The use of T2 amplifies the regional contrasts of the warming rate, i.e., the trend underestimation in the US and overestimation at high latitudes by T2.

Land surface air temperature (Ta) is one of the fundamental variables in weather and climatic observations, modeling, and applications1,2. Despite the ongoing increase in atmospheric greenhouse gases, the global mean surface temperature (GMST) has remained rather steady and has even decreased in the central and eastern Pacific since 19983. This cooling trend is referred to as the global “warming hiatus”4,5. Several explanations have been suggested for this trend, which can be categorized into natural variability, external variability and observational errors6,7,8. Natural variability includes the El Niño–Southern Oscillation (ENSO) and its decadal variability9,10, the Pacific Decadal Oscillation (PDO)3,11, the Interdecadal Pacific Oscillation (IPO)12and trans-basin transportation of mass and energy9,13,14,15. Atlantic-warming-induced easterly wind anomalies over the Indo-western Pacific and westerly wind anomalies over eastern Pacific16, thereby produce Indo-western Pacific warming and then enhance Walker circulation together by strengthening Pacific trade winds17,18,19, ocean-atmosphere dynamical interactions20, and ocean heat storage exchange over Indo-Pacific-Atlantic-Southern oceans9,13,14,15. External variability, mainly includes weakening solar activity21,22,23, increasing stratospheric aerosols24,25,26,27,28,29, decreasing stratospheric water vapor concentrations30, minor volcanic eruptions31 and diminishing sea ice extent32. These factors jointly result in a warming slowdown during the period 1998–2013. Furthermore, by analyzing the seasonal mean GMST trends, Cohen, et al.33 and Trenberth, et al.3 identified the seasonally asymmetric nature of the temperature trend with evident cooling in winter, which was suggested to be associated with sea surface temperature. However, after adjusting for sea surface temperature anomalies over the equatorial eastern Pacific in a coupled climate model, the GMST trend was reproduced, whereas the winter trend over Eurasia was not10.

Although the warming hiatus expressed by GMST has been attributed to the ocean to some extent, the regional components of the warming hiatus and their underlying mechanisms are not well constrained, especially over land. Recently, extreme cold events in winter occurred over the midwestern and southeastern United States (US) and Europe, with strong and cold winds. There are two current views to explain these events. One is that the Arctic warms and the polar vortex weakens as a result of the reduction in sea ice extent, allowing a high volume of cold air to rush into the mid-latitudes as a wave, thereby maintaining the mild temperature in the Arctic, known as “warm Arctic-cold continents”32,34,35,36,37. The other view is that the increase in summer Eurasian snow cover and the warming Arctic together induce a negative trend in the Arctic Oscillation (AO), which increases the frequency of Eurasian blocking and cools the mid-latitudes37,38,39,40,41,42. Because diminishing sea ice has an evident impact on mid-latitudes temperature variability on an annual timescale, whether and to what extent its spatial pattern may influence the surface warming trend in the most recent decade requires examination.

Most of the existing studies were based on global analyses of Ta, including those performed by several groups, such as the National Oceanic and Atmospheric Administration’s (NOAA) National Climatic Data Center (NCDC) with the Global Historical Climatology Network (GHCN)43,44,45, the Goddard Institute for Space Studies (GISS)46, and a joint effort between the Met Office Hadley Center and the University of East Anglia Climate Research Unit with Temperature, version 4 (CRUTEM4)47,48. All of the global temperature analyses for climate detection and attribution over land performed by the aforementioned groups relied heavily on T249,50. However, existing studies have reported that observation time and temperature definition do bias daily mean temperature51,52,53,54,55,56,57,58. For examples, Ta is recorded from midnight to midnight as a day at first order National Weather Service stations, but the observation is usually taken at midmorning or late afternoon at cooperative stations for convenience. The different ‘day’ defined by the observation time leads to varying daily maximum and minimum temperature for a day, which would bias daily mean temperature54,59,60. Despite of a relative small bias for a majority of days, bias in daily mean temperature can be large and of either sign as a large difference in day-to-day temperature61. Another case, if close to summer or winter solstices, biases from the two sun-time changes could be included in the records when the observation time is not at midnight, which is verified by Vose, et al.58. Recent researches have noted that the trend of T2 has notable biases of 25% at a grid scale size of 5° × 5° 2, and the trend bias for the 1973–1997 period can partially explain the enhanced warming rates over the northern high latitudes and the “warming hole” over the central US62. Moreover, several studies7,63,64,65 have pointed out the underestimated effect of bias from data coverage on the recent warming trend. Therefore, the incomplete spatial sampling of data has a strong impact on the global or regional warming rate. However, whether the temporal sampling bias has an evident impact on the recent warming slowdown and its spatiotemporal pattern still remains unclear.

Daily maximum (Tmax) and minimum temperature (Tmin) have been operationally observed at weather stations globally since the middle of the 19th century66. Their average (T2 = (Tmax + Tmin)/2) has been taken as a standard definition of Ta1 and has been the backbone of current global analyses of Ta over land45,47,49. Usually, T2 is applied from 0:00 to 0:00 O’clock daily. Hourly temperature data have increasingly become available since the 1990s as the observing infrastructure has been automated1. Mean temperature can also be calculated from 24 hourly observations at local time

, which has been regarded as the true mean temperature2,49. This would describe the underlying physical processes better but has rarely been used and evaluated in climate analyses.

Under clear sky conditions, Ta usually reaches Tmin in the early morning because of long-wave radiation cooling and reaches Tmax in the early afternoon because of solar short-wave radiation heating. However, because the significant diurnal cycle of temperature is easily affected by land-atmosphere states67, such as notable variations in incoming solar radiation, indirect/direct aerosol effects, precipitable water vapor68, soil moisture, cloud conditions69, large-scale circulation modes70 and vegetation cover, it is not linear or symmetrical2. Therefore, T2 may introduce bias in estimating the true monthly mean temperature. What is the magnitude of this bias and its effect on the warming hiatus for the 1998–2013 period? Does this bias and its effect on temperature trend vary by season and geographic location?

To answer the above questions, we conducted a comprehensive quantitative assessment of the temperature trend difference between T2 and T24 and its spatiotemporal features, to examine its effect on depicting the recent warming hiatus. T24was averaged from the continuous hourly Ta observations collected by the NCDC Integrated Surface Database (ISD-H)71, available at approximately 3400 globally distributed weather stations since 1998. Note that warm season is defined from May to October in Northern Hemisphere and from November to April in Southern Hemisphere, as opposite for cold season.

Here, we comprehensively described the regionality and seasonality of recent warming hiatus, including contrast of ocean and land surface warming rates. Figure 1 shows the temperature trend for 1998–2013 over ocean and land based on data from the Merged Land-Ocean Surface Temperature Analysis (version 3.5.3) of the National Oceanic and Atmospheric Administration (NOAA-MLOST), consisting of the Global Historical Climate Network (GHCN) over land45 and the extended reconstructed sea surface temperature (ERSST) analysis (version 3) over ocean72. It manifests the cooling eastern Pacific in the twenty-first century reported by Kosaka and Xie10 as an ENSO-like pattern (Fig. 1a–c) but also indicates much lower temperatures in cold seasons over North America and the mid-latitudes of Eurasia (Fig. 1b), resulting in a more evident hiatus during the period of 1998–2013 over land than ocean. Moreover, the western Pacific along the coast73 and some regions of the Atlantic Ocean exhibit cooling in both seasons (Fig. 1a–c). Accordingly, the global warming hiatus for 1998–2013 (0.045 °C/decade, Fig. 1d) mainly results from the ocean warming slowdown over the whole year (approximately 0.01 °C/decade, Fig. 1d,e,f) and the land cooling in cold seasons (−0.012 °C/decade, Fig. 1e). 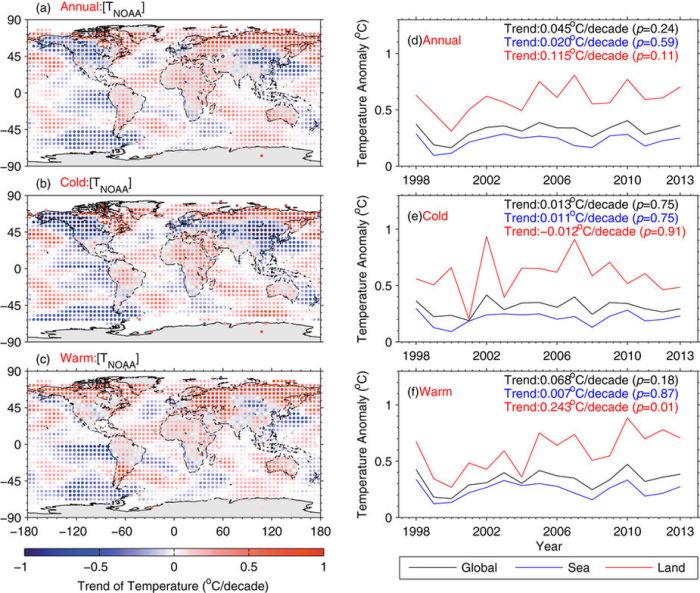 The (a) annual, (b) cold, and (c) warm seasonal temperature trends (units: °C/decade) for 1998–2013 are shown from the Merged Land-Ocean Surface Temperature Analysis (version 3.5.3) of the National Oceanic and Atmospheric Administration (NOAA-MLOST). Changes in the temperature anomalies at (d) annual, (e) cold and (f) warm seasonal timescales are shown over the globe, land and sea. The trends and statistical significance level (p) according to the t-test method are listed in each panel. This dataset is comprised of land surface temperature from the Global Historical Climate Network (GHCN) and sea surface temperatures from the extended reconstructed sea surface temperature (ERSST) analysis version 3. It manifests a cooling of the eastern and western Pacific along the coast and some regions of the Atlantic Ocean but also a much cooler temperature change in cold seasons over North America and eastern and central Eurasia. Accordingly, the global warming hiatus (0.045 °C/decade) mainly results from the ocean warming slowdown (0.02 °C/decade) and the land cooling in cold seasons (−0.012 °C/decade). In addition, there is a larger divergence in seasonal trends over land than over ocean. This figure was produced by MATLAB version 7.13 (http://www.mathworks.com/products).