Guest Post by Willis Eschenbach (see Update at the end)

I had tweeted the following: 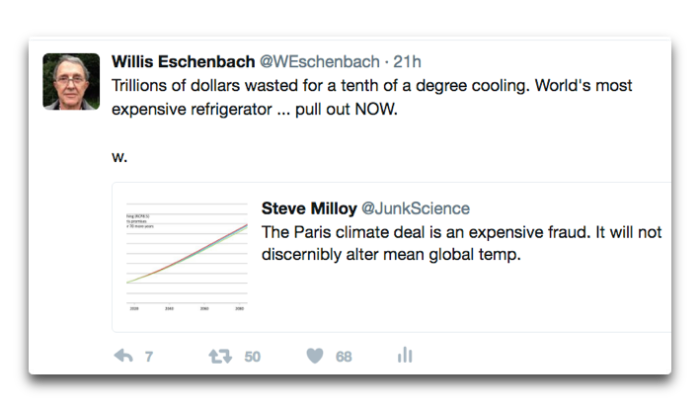 Various people either liked or retweeted this, including my mad mate and human lightning rod, James Delingpole. This post started because someone named Robin Whitlock tweeted the following:

Delingpole is a knuckledragger, pure and simple. It’s a wonder his brain hasn’t shrivelled by now, or perhaps it has…

To which I replied:

Ah, schoolboy insults. They make you look so sophisticated and wise.

Sadly, Mr. Whitlock declined the opportunity to actually say what was wrong with James Delingpole’s ideas, and instead said;

Okay, Mr Eschenbach, let’s see how much you actually know about it. Debate CC with me if you dare

Now, I’m always happy to debate climate change, but not in 140-character chunks. So I said:

I’m happy to debate, although I don’t see how I can do so on Twitter. My blog is available. What do you wish to debate?

Of course, nothing is that simple. Before debating the ideas, the charming man has to start with the seemingly obligatory ad hominem arguments about my education, my ancestry, and my general unfitness for human consumption, viz:

Ha, okay, just seen this. That tells me everything for a start: You’re a ‘professional’ climate change denier

A “professional climate change denier”? If so, where’s my dang paycheck? I am an amateur scientist, and proud of it. I’m one of the few amateur scientists to have anything peer-reviewed published in Nature Magazine. It was only a “Brief Communications Arising”, but it was solidly peer-reviewed. In addition, at present, I have more than sixty citations to my publications in the scientific journals … not bad for a self-taught man with absolutely no scientific education.

He followed this with:

Construction Manager and former Accounts Manager. That is, not a climate scientist.

This scientifically challenged person thinks that reading a very slanted bio written by my enemies tells him “everything” about the scientific validity of my claims … yeah, that’s the ticket. No need to debate the issues, just accuse your opponent of being unqualified … amazingly, this good fellow actually seems to think this makes the slightest difference as to whether my scientific claims are true.

He then goes on to a series of tweets, which I’ve condensed into one for easy reading:

So, let’s go on to some of the statements mentioned here. First, the “eight tenths of a degree” statement. That’s being way too optimistic. Even 2 deg C is probably too optimistic. Most climate science says we’re heading in the direction of 4 or even 6 degrees C. Furthermore, at 2 degrees C, melting permafrost releases methane into the atmosphere, which is even more dangerous than CO2.

I also see that you draw on climategate again, when the scientists involved were cleared of any wrongdoing by several investigations. You say that greenland has only lost a small fraction of it’s total ice mass but the evidence indicates that Greenland’s ice loss is accelerating and will contribute to sea level rise in the order of metres over the next few centuries.

OK … let’s take that one at a time. First, I have no idea which “eight tenths of a degree” he’s talking about. Apparently, he’s talking about some claimed warming by 2100, but from memory, I’ve never claimed that it would be 0.8°C. I’m not sure what I’m missing here …

He then says regarding Climategate that “the scientists involved were cleared of any wrongdoing by several investigations.” Because I was actually discussed in the Climategate emails, which revealed that the people at UEA lied to my face, I can assure you that the whitewashes that were done were pathetic imitations of a real investigation. In fact, the Brits said that the only reason that criminal charges weren’t laid because of their lies was that the statute of limitations had expired. And Acton’s “investigation” of the actions of Briffa and Jones never interviewed either one of them … investigations? Don’t make me laugh. See Steve McIntyre’s excellent blog for dozens of well-informed and researched articles on the subject. I fear Mr. Whitlock is far out of his depth on this one, as both Steve and I were involved in the actual event.

He next claims, without attribution or citation, that “most climate science” (whatever that might be) says we’ll warm by “4 or even 6 degrees C“. In fact, you’d be hard pressed to find folks other than wild alarmists who make that claim, so I’d be interested in his sources.

Finally, he says that if the arctic warms by 2°C it will somehow release huge amounts of methane … again, this is not scientifically supported. Instead, it is based on … wait for it … climate models:

The new study found the rate of old carbon released during the past 60 years to be relatively small. Model projections conducted by other studies expect much higher carbon release rates—from 100 to 900 times greater—for its release during the upcoming 90 years. This suggests that current rates are still well below what may lay ahead in the future of a warmer Arctic.

This is typical of all of the claimed dangers of CO2. We have computer models, we have lots of alarmist claims, we have failed sequential doom-casting, in the above quote we have “this suggests” and the other usual weasel words, “might happen” and “could lead to” and the like … but what we don’t have is any evidence that anything out of the ordinary is happening. Yes, people say that we’ll get a ten foot sea level rise by 2100 … but there is no sign of acceleration in the rate of rise despite the warming of the last three centuries.. Similarly, people say we’ll get mega-methane from arctic warming, but actual studies show no such increase happening despite the warming of the last three centuries. The bizarre truth is that we are studying a claimed phenomenon (increased warming due to humans) when we have no actual evidence that anything out of the ordinary is occurring. No unusual warming. No increase in extreme events. No increase in rainfall. No change in sea level rise. No increase in methane. If Mr. Whitlock has any such evidence, I hope he produces it.

Finally, in general the claimed sensitivity of the earth to CO2 has been falling. It used to be 3°C per doubling, then 2°C per doubling, and now it’s about 1°C per doubling. Given the claimed future increases in CO2 (which may never come to pass), this pretty much rules out his four to six degree C warming scenario.

But enough of what passes for a debate on Mr. Whitlock’s planet. Here’s the part that drives me nuts in discussions like this:

• Nobody knows why the globe was generally warmer in Roman times

• Nobody knows why the globe generally cooled after Roman times

• Nobody knows why the globe greatly cooled after Medieval times, leading to the “Little Ice Age” in the 1600s/1700s.

• Nobody knows why the Little Ice Age didn’t descend into a real Ice Age.

• Nobody knows why the earth started generally warming at about 0.5°C per century since the Little Ice Age.

• Nobody knows why this warming continued through the 20th century.

• Nobody knows why there has been a two-decade “hiatus” in the ongoing three centuries of warming.

Given our total inability to understand or explain the climate of the past, the idea that a Tinkertoy computer model of the climate can tell us what will happen in the next hundred years is … well … let me describe that claim as “extraordinarily optimistic” rather than say “stunningly foolish” …

I’ve invited Mr. Whitlock to continue the discussion here, to avoid the 140-character limit. Let’s see if he is man enough to step up to the plate.

Best regards to all, including Mr. Whitlock,

PS—When you comment please QUOTE THE EXACT WORDS THAT YOU ARE DISCUSSING, so we can all be clear on both your subject and who you are addressing.

I assume I’m supposed to be frightened … but in fact I’m mystified. I ask why, despite his bluster, he hasn’t shown up to debate. He replies that he won’t tell me how he is “deploying his forces”.

705 thoughts on “An Invitation To Debate "Climate Change"”