In 2008, candidate Barack Obama ran an ad with this opening line: “The hands that built this nation can build a new economy. The hands that harvest crops can also harvest the wind.”

And then it showed men working on roofs: “The hands that install roofs can also install solar panels.”

The ad was directed at a group Obama was acutely aware he had to win over — white, working-class men. A quarter of those same men deserted Democrats in 2016, according to a New York Times analysis, and voted either for Donald Trump or a third-party candidate.

On Tuesday, President Trump is trying to start making good on his promises to many of those same white men — coal workers. The Trump administration is doing an about-face on President Obama’s climate and environmental policies. The president signed an executive order with a goal of taking restraints off businesses and boosting the coal industry.

“He made a pledge to the coal industry, and he’s going to do whatever he can to help those workers,” a senior administrative official said Monday ahead of the executive order’s signing.

Surrounded by about a dozen coal miners, he said, per NPR’s Jennifer Ludden, “You’re going back to work.” He pledged to “end the war on coal and have clean coal, really clean coal.”

But there are problems with both Trump’s nostalgic Make America Great Again coal promises and Obama’s radical vision for a reshaped economy.

Trump’s ignores the reality of a changing energy industry. Solar jobs, for example, have taken off over the past decade. The Obama administration tried hard to incentivize clean energy (so much so that it got caught up in the Solyndra scandal. The head of Solyndra was an Obama campaign bundler. Obama visited the company and touted it. His administration incentivized companies like it. In 2011, the government helped Solyndra refinance, but just months later, the company failed).

But solar now accounts for some 260,000 energy jobs in the country, the majority of which are held by installers. That’s almost four times the number of coal industry jobs, about 70,000, as of May 2015, according to the Bureau of Labor Statistics. And that industry has been on a steady and steep decline over the past 30 years…

In the energy industry, solar is outpaced only by the oil industry, according to a major report by the Solar Foundation. And solar’s gotten cheaper to produce (despite Trump’s proclamations during the campaign that he loves solar except that it’s expensive).

Why do journalists, environmentalists and liberals (redundant, I know) confuse energy production with jobs programs?  The only way an economy can successfully grow in a healthy, robust manner is through increasing productivity.

Productivity is an economic measure of output per unit of input. Inputs include labor and capital, while output is typically measured in revenues and other gross domestic product (GDP) components such as business inventories. Productivity measures may be examined collectively (across the whole economy) or viewed industry by industry to examine trends in labor growth, wage levels and technological improvement.

Productivity gains are vital to the economy, as they mean that more is being accomplished with less. Capital and labor are both scarce resources, so maximizing their impact is a core concern of modern business. Productivity enhancements come from technology advances, such as computers and the internet, supply chain and logistics improvements, and increased skill levels within the workforce.

Putting coal miners back to work will be a byproduct of increased coal production, not the purpose of it.

Here is a plot of U.S. energy production from oil & gas, coal, wind and solar power in million tonnes of oil equivalent (Mtoe).

Here is a plot of Mtoe per thousand employees:

Which energy employees are the most productive? 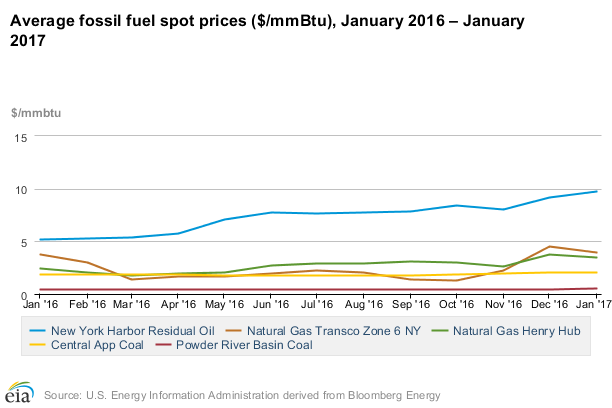 269 thoughts on “What NPR Misses About Energy Jobs In America”