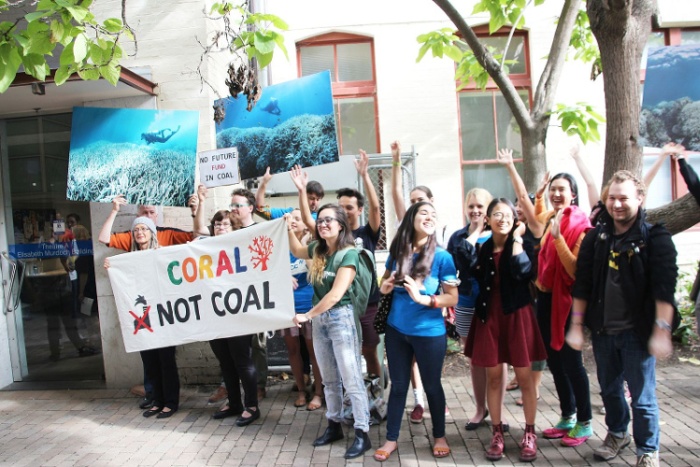 According to the Guardian, the Green Group Galilee Blockade has urged activists to apply for jobs at the gigantic Carmichael Coal Mine in Australia, so they can obtain sensitive information for use against their employers.

Get a job with Adani and infiltrate coal project, activists urge supporters

Galilee Blockade, which opposes the $16bn Carmichael mine, urges followers to apply for jobs with the Indian company.

A civil disobedience campaign targeting Adani’s controversial Queensland coal project has asked almost 12,000 supporters to sign up for a job with the miner.

The Galilee Blockade is working on infiltrating Adani and related companies to gain sources of information to help its plans for “direct action”.

The group is emailing 11,931 supporters over several days to ask them to register their interest in an Adani career via the company’s website.

A Galilee Blockade spokesman, Ben Pennings, said the group was already working with industry insiders, including employees at companies including Rio Tinto, and would help others get appropriate qualifications to join the industry. “The level of support is phenomenal,” Pennings said.

“We now the mining industry tries to infiltrate the environmental movement, we know they engage state and federal police about targeting activists,” Pennings said. “So as far as we’re concerned we want a level playing field, to get as much info as possible to find out about Adani and the people they’re in bed with.

Work for Adani to Save the Reef!

Adani is asking people to register their interest in an Adani ‘career’. We want you to apply!

We need Adani employees who care more about Aboriginal homelands, the Reef, and the Great Artesian Basin than extra profit for multi-billionaire Gautam Adani.

Of course if the Galilee Blockade campaign gets inside information on Adani and their friends, we’ll use direct action tactics to stop them.

REGISTER TO WORK FOR ADANI NOW!

Do you know anyone who works for a public relations firm, lobbying firm, or political party that deals with Adani?

Do you know about an Adani event that’s not public? Are they attending a political fundraiser or mining industry event?

Do you know whether Adani have donated more money to Labor or the LNP? One Nation or Katter Australia Party maybe?

We will protect your identity, seek legal support, and send information to the appropriate authorities if Adani is breaking the law. We’re gearing up around the country for direct action. Donate what you can now so we can professionally train people around the nation. Together we will win.

I can’t help feeling this new campaign is doomed to failure. For the infiltration plan to work, green activists would have to get a job.

153 thoughts on “Green Group Urges Activists to Apply for Coal Jobs, to Infiltrate the Carmichael Coal Mine.”