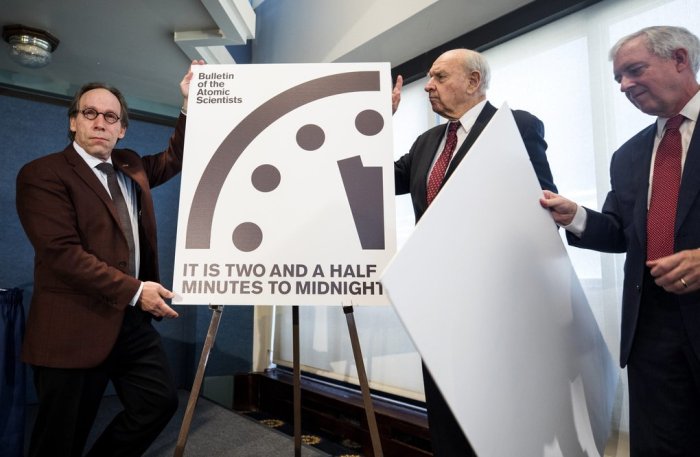 The board of the Bulletin of Atomic Scientists recently issued their 2017 Doomsday Clock Statement: it is two and a half minutes to midnight. That’s alarming – the closest the clock has been to midnight since 1953, when the superpowers were testing the hydrogen bomb.

If they are so intent on scaring us silly, their symbolic clock should be accurate, and that’s problematic since it tracks disparate threats with varying degrees of urgency: nuclear war; climate change; and emerging technologies. The scientists’ stated motivation is to apply pressure to governmental leaders by calling on citizens “to express themselves in all the ways available to them.”

Their message would be more potent if they don’t conflate disparate threats. The notion of a single Doomsday Clock that conflates climate change with nuclear war and emerging technologies is convoluted.

The threat of nuclear war is more urgent. The timescales are more amenable to a clock which can be fine-tuned to accommodate specific events: rogue nations conducting nuclear tests; China rattling its sabers; India and Pakistan quarreling over Kashmir; Russia reneging on a deal on the disposal of weapons-grade plutonium; deployment of destabilizing weapons.

Climate change and anthropogenic global warming are a bit fuzzier. A Doomsday clock that purports to measure its trend line cannot be as precise as one that measures the threat of nuclear war. Moreover, the nature of the clock is inherently different: the Nuclear Doomsday clock can go counterclockwise — it has moved backwards with the signing of test ban and nonproliferation treaties, for example.

According to the scientific consensus on the trajectory and causes of global warming, there is no going back; indeed, we may already be at midnight. Even if we stop carbon dioxide emissions now, greenhouse gasses and temperatures will still grow. According to these scientists the arrow of time only moves forward for anthropogenic global warming; all we can do is slow the clock as it ticks inexorably towards a post-apocalyptic dawn.

If the clock measuring the threat of nuclear war can go backwards, but global warming is irreversible, how can they be calibrated simultaneously by the same Doomsday clock?

In 2015, the atomic scientists moved the clock forward two minutes, largely due to climate change: “Unchecked climate change, global nuclear weapons modernizations, and outsized nuclear weapons arsenals pose[s] extraordinary threats….[C]urrent efforts are entirely insufficient to prevent a catastrophic warming of Earth.” This wasn’t done in isolation, but in relation to previous movements that were based upon a nuclear threat that ticks at a different rate. The timescales of the threats are not concomitant and cannot be consistently measured by the hands of the same clock.

Besides the lack of symmetry, the imminence of the threat of nuclear war is measured in minutes. Decisions about DEFCON alerts are time-condensed as humans evaluate whether the sirens are due to a software flaw, space debris, a flock of geese, a gamma ray burst or, god-forbid, incoming ballistic missiles. The time horizon for a corresponding impact caused by climate change may be hours. (cont…)

The Doomsday Clock is a haunting reminder of some of the perils the human race faces, but even symbolic clocks should have consistent continuity.