Today, there’s all sorts of caterwauling over the NYT headline by Justin Gillis that made it above the fold in all caps, no less:  FOR THIRD YEAR, THE EARTH IN 2016 HIT RECORD HEAT.

I’m truly surprised they didn’t add an exclamation point too. (h/t to Ken Caldiera for the photo)

Much of that “record heat” is based on interpolation of data in the Arctic, such as BEST has done. For example:

A different view of the record #Arctic warmth in 2016, which contributes to the ongoing decline in #seaice. pic.twitter.com/m1vt4k1wNo

Since 1970, #globalwarming has continued at a furious pace, and disproportionately impacted continents and the Arctic. pic.twitter.com/HOBAZuirJA

But in reality, there’s just not much data at the poles, there is no permanent thermometers at the North pole, since sea ice drifts, is unstable, and melts in the summer as it has for millennia. Weather stations can’t be permanent in the Arctic ocean. So, the data is often interpolated from the nearest land-based thermometers.

To show this, look at how NASA GISS shows data with and without data interpolation to the North pole:

Here is the polar view: 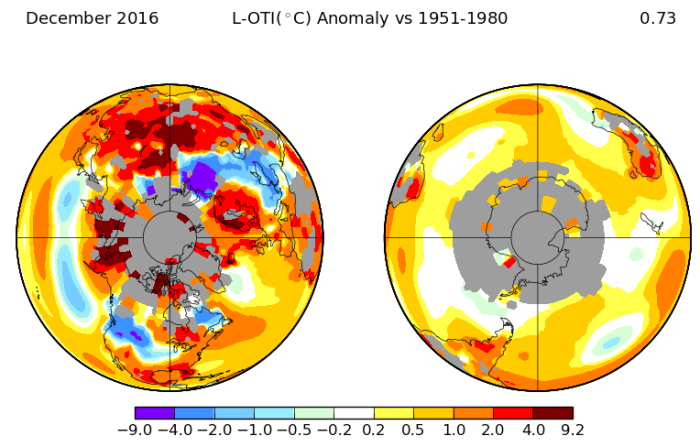 What a difference that interpolation makes.

So you can see that much of the claims of “global record heat” hinge on interpolating the Arctic temperature data where there is none. For example, look at this map of Global Historical Climatological Network (GHCN) coverage:

As for the Continental USA, which has fantastically dense thermometer coverage as seen above, we were not even close to a record year according to NOAA’s own data. Annotations mine on the NOAA generated image:

That plot was done using NOAA’s own plotter, which you can replicate using the link above. Note that 2012 was warmer than 2016, when we had the last big El Niño. That’s using all of the thermometers in the USA that NOAA manages and utilizes, both good and bad.

What happens if we select the state-of-the-art pristine U.S. Climate Reference Network data?

Interestingly enough, if we plot the monthly USCRN data, we see that sharp cooling in the last datapoint which goes below the zero anomaly line: 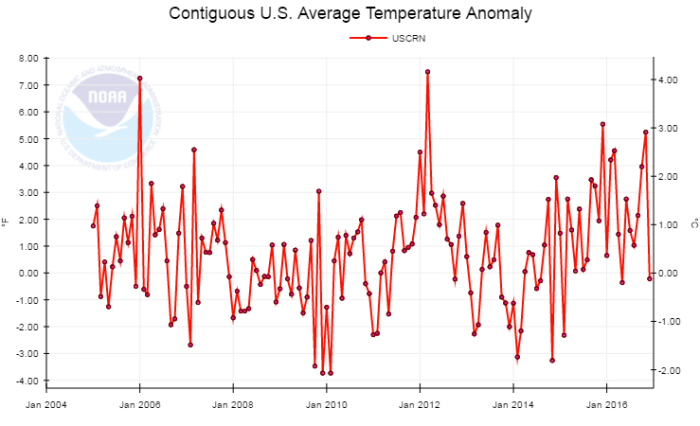 Added: In the USCRN annual (January to December) graph above, note that the last three years in the USA were not record high temperature years either.

Added2: AndyG55 adds this analysis and graph in comments

When we graph USCRN with RSS and UAH over the US, we see that USCRN responds slightly more to warming surges.

As it is, the trends for all are basically identical and basically ZERO. (USCRN trend was exactly parallel and with RSS and UAH (all zero trend) before the slight El Nino surge starting mid 2015 )