Remember back in September 2012 Professor Peter Wadhams famously said that Arctic sea ice would disappear within four years? He also had another prediction in 2013, saying that due to the “methane emergency”, Arctic Sea ice would disappear within 2 years. Even Gavin Schmidt thought that was bollocks. Of course, he [Wadhams] was wrong. Now, his four year prediction from 2012 is being tested this year, and while sea ice has in fact melted faster than usual in May (partly due to El Niño boosted global temperatures), it is still a long way from disappearing right now [and] is within 2 standard deviations of normal for this time of year: 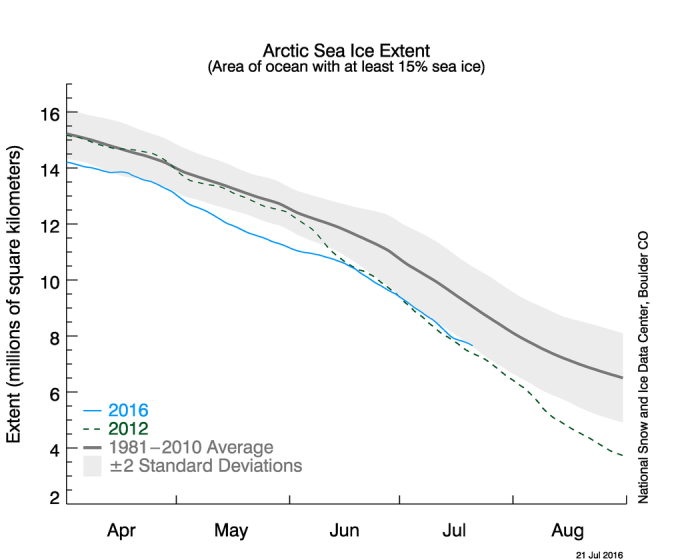 Professor Wadhams has past form with his Arctic sea ice extent predictions. Only last year he predicted that sea ice would vanish

He’s up to his old tricks again, so i called him out and bet him £1000 his prediction for this year was wrong;

Dear Mr Keiller, Thanks but I don’t gamble. Nor do I make many of the definitive predictions attributed to me by newspapers, who, as the Brexit campaigns demonstrate, have little interest in truth and much in sensation. The area trend is certainly on the way down, and before long the area will drop below 1 million sq km, but not definitely this year,

> Dear Professor Wadhams, I read this article with interest and a degree of

> square kilometres for September of this year’?

> Should be a sure thing for you, after all you are Professor of Ocean

> Physics and Head of the Polar Ocean Physics Group at Cambridge

> I have also posted this email at “Tallbloke’s Talkshop”;

Personally, I think Professor Wadhams has issues with determining reality versus fantasy. After all, he thinks big oil assassins are out to get him.

Note: about 15 minutes after publication, this post was updated to clarify Wadhams vs Schmidt in the first paragraph, fixed a typo, and some missing punctuation was also added in the same paragraph.