Meteorological agencies like NOAA use the sea surface temperature anomalies of the NINO3.4 region (5S-5N, 170W-120W) of the equatorial Pacific to determine if the tropical Pacific is experiencing El Niño, La Niña or ENSO neutral (not El Niño, not La Niña) conditions. Other agencies use the sea surface temperature data for the NINO3 region (5S-5N, 150W-90W).  See the map on the NOAA webpage here for those locations.

Based NOAA’s weekly data for the NINO3.4 and NINO3 regions (data here), during the week centered on July 13, 2016, the sea surface temperature anomalies for both regions dropped to -0.6 deg C, which is a tick below the -0.5 deg C threshold of La Niña conditions.  See Figures 1 and 2.  If the sea surface temperature anomalies of the NINO3.4 region continue to stay depressed for a good number of months, NOAA will declare an “official” La Niña is taking place.  Like El Niños, La Niñas typically peak in November through January, so there’s a long way to go. 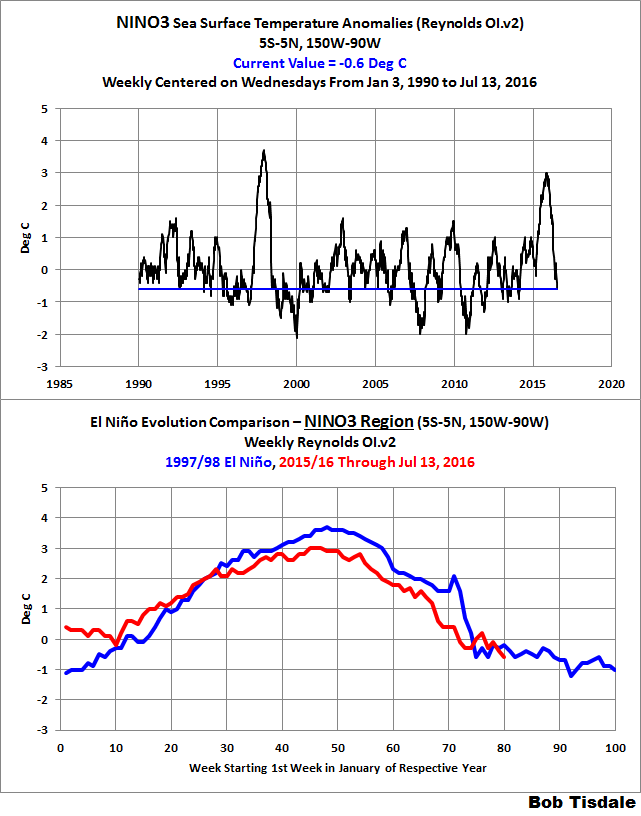 The top graphs in Figure 1 and 2 include a time-series graphs of the weekly NINO3.4 region sea surface temperature anomalies from the NOAA/CPC Monthly Atmospheric & SST Indices webpage, specifically the data here.  The base years for anomalies for the NOAA/CPC data are referenced to 1981-2010. And in the bottom graphs, the evolution of the NINO3.4 sea surface temperature anomalies in 2015/16 are compared to 1997/98, another very strong El Niño and transition to La Nina.

According to NOAA’s weekly data (based on their Reynolds OI.v2 data), the transition to La Niña conditions in 2016 are lagging slightly behind those in 1998, while in the NINO3 region, they’re more comparable.

In the near future I’ll be publishing a post, or a series of them, about how La Niña events are different than El Niño events. Until then…

WANT TO LEARN MORE ABOUT EL NIÑO AND LA NIÑA EVENTS AND THEIR AFTEREFFECTS?

My ebook Who Turned on the Heat? goes into a tremendous amount of detail to explain El Niño and La Niña processes and the long-term aftereffects of strong El Niño events.  Who Turned on the Heat? weighs in at a whopping 550+ pages, about 110,000+ words. It contains somewhere in the neighborhood of 380 color illustrations. In pdf form, it’s about 23MB. It includes links to more than a dozen animations, which allow the reader to view ENSO processes and the interactions between variables.

Who Turned on the Heat? – The Unexpected Global Warming Culprit, El Niño-Southern Oscillation IS NOW FREE.  Click here for a copy (23MB .pdf).

I also published On Global Warming and the Illusion of Control (25MB .pdf) back in November 2015.  The introductory post is here.  It also includes detailed discussions of El Niño events and their aftereffects in Chapter 3.7…though not as detailed as in Who Turned on the Heat?