From the “arch denier Watts leads the way” department (see my photos below) I thought it would be interesting to see how many climate scientists actually have solar power on their home, so I did an aerial survey to find out. The results don’t speak well for them. Don’t worry, I did not disclose anyone’s address – Anthony

Climate scientists are more credible when they practice what they preach

Americans are more likely to follow advice about personal energy use from climate scientists who minimize their own carbon footprint, according to Shahzeen Attari of Indiana University’s School of Public and Environmental Affairs. She and her team used two large online surveys to determine that scientists should practice what they preach if they want their advice on reducing energy use to have greater credibility. Their findings are published in Springer’s journal Climatic Change.

Personal attacks on climate experts and advocates are not uncommon when it comes to their own behavior. For example, environmentalist and former vice president Al Gore was criticized for home energy use that far exceeded the national average.

Attari and her team conducted the online surveys with about 3,000 Americans to see the impact of the researchers’ credibility on their messages and advice. Participants were randomly presented with fictional vignettes about a climate expert presenting a talk on how an individual’s actions can collectively have a large impact on the environment.

The surveys began with a baseline narrative: a leading climate researcher is giving a talk about the merits of reducing air travel and lowering the amount of energy used in the home. The researcher gives advice to the audience on how they can reduce their own energy use.

The survey participants were then asked to judge the impact of a range of actions by the researcher including this one: “During the question period a member of the audience asks the researcher whether he flew across the country to give this talk. He replies that he regularly flies to lectures and conferences all over the world. It is part of his job, though flying like this does lead to negative impacts on the climate.”

The surveys showed that audiences are less concerned with transportation habits than home energy use. A scientist who buys carbon offsets is seen more positively but it doesn’t wipe the slate clean.

“Credibility may require climate researchers to decrease their carbon footprint,” Attari said. “Effective communicators about climate change do sometimes discuss their own behavior and our research indicates that this can be a good way to enhance their credibility,” Attari added. “Whether the climate scientists are male or female, what they do in private can have a pronounced effect on how their message is perceived by the public.”

She continued, “To communicate effectively, advocates of energy conservation need to be the change they wish to see. Climate researchers, including the three authors of this study, need to make strong efforts to reduce their own carbon footprints.”

Still to be determined is whether the effects on credibility and on intentions to conserve are temporary or enduring, the study reports. Another open question is whether the personal behavior of scientists is a factor when lawmakers consider changes in the nation’s policies on climate change.

It is interesting to note that Mike Mann’s house near State College PA, the address of which is available on the web from a variety of public sources, shows no trace of solar power:

(UPDATE: It seems that Google identified the wrong house in street view, and because of that, the wrong house was presented in the initial post. With the help of a realtor, the correct house was located using a different service. The updated location and the previous one is shown below. It doesn’t have solar. I apologize for any confusion this might have caused.)

I won’t disclose his address, or the address of others below (I’ve pixelated out street names too), because I don’t want to make it easy for anyone to harass them over this. Solar panels on your home are a personal choice, but it sure looks better to have them when you are preaching to the world that we must do everything possible to reduce personal carbon footprints.

Climate scientist Kevin E. Trenberth of NCAR in Boulder (of Climategate fame) has quite a nice home in a private community, information that is also easily publicly available. His neighbor has solar panels, but he does not.

UPDATE: As I mentioned in comments, I’m happy to provide an update should any climate scientist want to show proof they have solar panels on their home. Dr.Kenneth Trenberth writes in to say:

I have had solar panels on my house since 1986: originally to heat water, then we moved in 1984 and installed pv panels, please see attached. The available south-facing roof is covered. 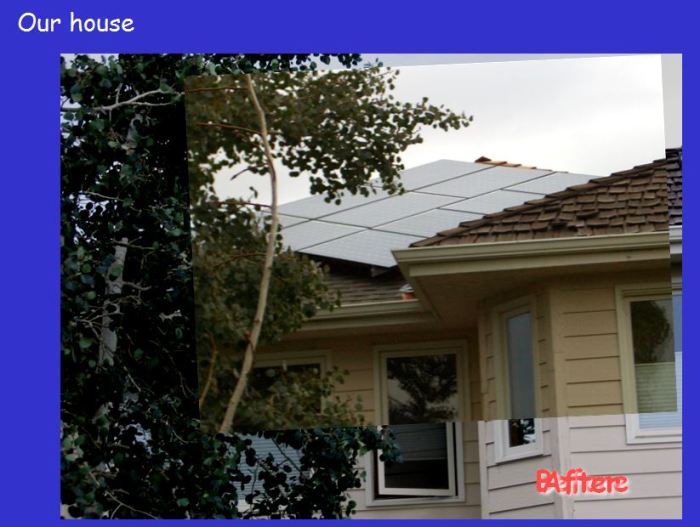 The panels he has are the lower efficiency silicon composites (brown-grey), rather than silicon crystalline (blue). so that explains why they blended into the roof color and were mostly invisible, though a couple of commenters thought they might be there.

Accord to Zillow, climate Scientist Jonathan T. Overpeck of the University of Tucson, also of Climategate fame, lives in a “3120 square foot, 3.5 bathroom, single family home”. You’d think that in hot, sunny, Arizona, he’d at least have solar on his home to cool a house that size, especially after rants like this on his Twitter feed: 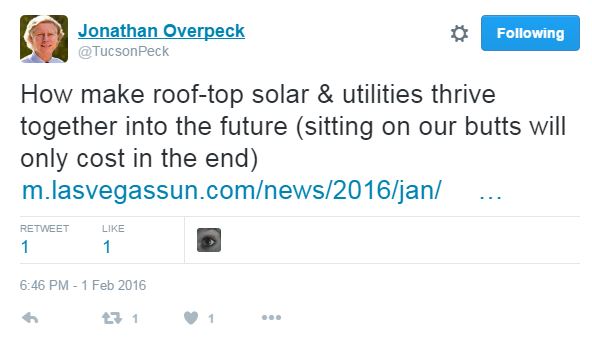 His home seems completely devoid of solar power as well: 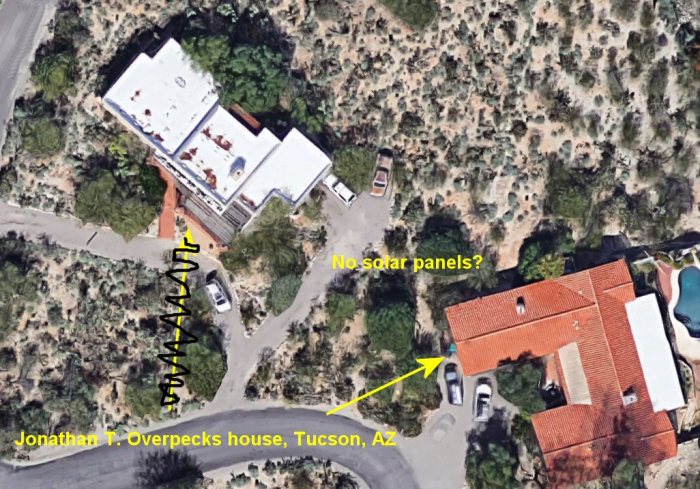 Note: I’m not absolutely certain which of the two house it is as Google’s place-mark for his address is a bit ambiguous), but all the evidence points to the one I’ve indicated. Either way, neither home has any solar panels. (Update: WUWT reader “Aridzona” who is a realtor, identified the correct house from real estate data. The image arrow was changed to reflect this, thanks.)

How about Thomas R. Karl, director of the National Climatic Center in Asheville, NC? He has a six figure annual salary according to budget reports I’ve seen, so surely he can afford home solar power to be put on his home near Asheville. Nope, it doesn’t seem so:

Karl’s second in command at the National Climatic Data Center (now NCEI) surprisingly does have solar panels, but he’s always been pretty green based on what I know of him.

Of course, no aerial survey would be complete without Dr. James Hansen, the “father of global warming” as described by some, who has a farm in Pennsylvania. He helpfully included the address in a letter to congress a few years back. Surely, with all the pronouncements about coal “death trains” and boiling oceans you’d think he’d have solar panels for his house. He does, sorta…he has them for his barn: 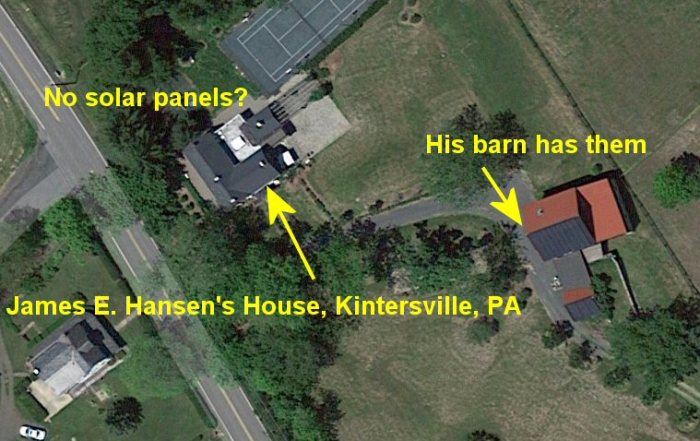 Guess who paid for them? You and I did. From the Powerline blog: (bold mine)

The really shocking thing for me was how many times he contradicted himself and made admissions against interest. If he was under oath and subject to cross examination at a trial, Power Line’s own John Hinderaker would carve him up. Example: He said that all energy subsidies must stop and be replaced by a $100 per ton carbon fee. He then later admitted that the solar panels on his barn were subsidized by the federal government. So it was simply a bizarre contradiction on his part.

And then there’s me, “arch climate denier” Anthony Watts: 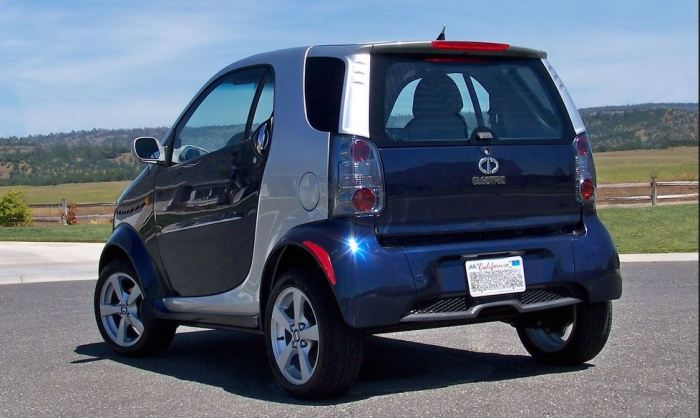 The electric car owned and driven daily by Anthony Watts

Aerial view of my home showing the solar panels

But, I’m the evil one, according to many climate scientists, anonymous coward bloggers, and activists.

Note: Some typos were corrected within 2 hours of publication. Also with an hour of publication, two images were updated that still showed some adjacent streets that were not pixelated out. No addresses were ever revealed.

185 thoughts on “Study: 'Climate scientists are more credible when they practice what they preach' – but my aerial surveys show many don't”