This study below says that after collating the data from 30,000 air flasks taken around the world, that ethane is again on the rise due to increased oil/gas production. I don’t doubt that. But there is a factor that they may have not considered: plastic bag bans. In California, there is now a statewide plastic bag ban. Recall that plastic bags were introduced because environmentalists claimed less tree felling for paper pulp would be a good thing, and plastic bags were introduced in 1982 by California grocery giant, Safeway, according to an NRDC article.

Production has been on the rise in the USA:

An interesting thing is that ethane (C2H6) is used for the production of plastic bags, in fact it is the only ingredient.

In 2008, the Los Angeles Times had this to say about plastic bags in a story titled The Incredible Plastic Bag

Plastic-bag recycling bins have been installed in all large California supermarkets and retail stores since 2007. Virtually all of the plastic in those bins is recycled. Moreover, plastic bags are reused for lining trash bins, pet waste disposal and more. Reuse is the best form of recycling because it consumes zero energy.

Yet just a few years later, they had this to say in an editorial: Let California’s plastic bag ban stand

California may be the leader, but the tide is turning against plastic bags elsewhere too; cities or legislatures in 25 states have enacted or discussed plastic bag bans and fees. Why? Because more and more jurisdictions have realized that giving up disposable plastic bags is a small sacrifice that delivers real environmental benefits. If the plastics industry was really as progressive as the name of its alliance suggests, manufacturers would be investing their money in more sustainable products. But instead they keep fighting the same fight. Californians need to send a strong message: The bag ban should stand.

Now that the ban is in effect, ethane is no longer removed from raw natural gas to make plastic bags. There is so much excess ethane from U.S. production now, that it is being shipped overseas in specially designed ships:

The vessel and its twin were built to ferry a hydrocarbon called ethane from the shale basins of the US to industrial plants in Norway and Scotland. Theirs will be the first voyages in a nascent seaborne market for ethane, a petrochemical building block for plastic bags, antifreeze and other goods.

EPA estimates of natural gas leakage rates of slightly below 2% of total production, others have found that leakage rates might be as much as 4% or above.  In 2011, the U.S. emitted approximately 6.89 million metric tons of methane associated with Natural Gas systems, though leakage may be going down some, it is unclear if ethane leakage may also be down

Plastic bags are almost entirely produced in the U.S., so it stands to reason that if plastic bag production has been curtailed by bans like that of California, that ethane that would normally be removed for production has to go somewhere. While some of it may go in ships overseas, some of it leaks into the atmosphere, adding to the greenhouse gas issue. They can’t leave it in the natural gas, so it is either burned off, vented, or leaked.

The ethane removal process is usually at a facility near wells, piped directly to a plastic making plant:

Polyethylene is derived from either modifying natural gas (a methane, ethane, propane mix) or from the catalytic cracking of crude oil into gasoline. In a highly purified form, it is piped directly from the refinery to a separate polymerisation plant. Source: http://nzic.org.nz/ChemProcesses/polymers/10J.pdf

Ethane has a Global Warming Potential (GWP) of 5.5 times that of Carbon dioxide according to the IPCC AR4 report in 2007: 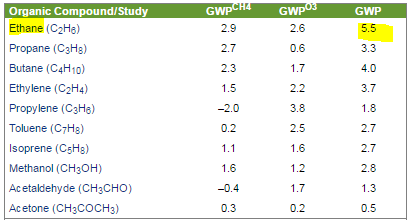 So with banning plastic bags to “save the environment”, we are likely allowing more ethane into the air, which increases warming if the IPCC figures are to be believed.

Environmentalists usually don’t think that far ahead, and probably never thought of this unintended consequence. As they say, the road to hell is paved with good intentions.

Here is the press release for the new study on ethane concentrations:

UNIVERSITY OF COLORADO AT BOULDER

Global emissions of ethane, an air pollutant and greenhouse gas, are on the uptick again, according to a new study led by the University of Colorado Boulder.

The team found that a steady decline of global ethane emissions following a peak in about 1970 ended between 2005 and 2010 in most of the Northern Hemisphere and has since reversed, said CU-Boulder Associate Research Professor Detlev Helmig, lead study author. Between 2009 and 2014, ethane emissions in the Northern Hemisphere increased by about 400,000 tons annually, the bulk of it from North American oil and gas activity, he said.

The decline of ethane and other non-methane hydrocarbons (NMHC) starting around 1970 is believed to be primarily due to better emission controls, said Helmig. The controls resulted in reduced emissions from oil and gas production, storage and distribution, as well as combustion exhaust from cars and trucks.

“About 60 percent of the drop we saw in ethane levels over the past 40 years has already been made up in the past five years,” said Helmig. “If this rate continues, we are on track to return to the maximum ethane levels we saw in the 1970s in only about three more years. We rarely see changes in atmospheric gases that quickly or dramatically.”

Ethane, propane and a host of other NMHCs are released naturally by the seepage of fossil carbon deposits, volcanic activity and wildfires, said Helmig. But human activities, which also include biomass burning and industrial use, constitute the most dominant source of the NMHCs worldwide.

“These human sources make up roughly three-quarters of the atmospheric ethane that is being emitted,” said Helmig.

The air samples for the study were collected from more than 40 sites around the world, from Colorado and Greenland to Germany, Switzerland, New Zealand and the Earth’s polar regions. More than 30,000 soda bottle-sized air containers were sampled at the National Oceanic and Atmospheric Administration’s (NOAA) Earth Systems Research Laboratory (ESRL) in Boulder over the past decade.

The study also showed that among the air sampling locations around the world, the largest increases in ethane and shorter-lived propane were seen over the central and eastern United States, areas of heavy oil and gas activity, said Helmig.

“We concluded that added emissions from U.S. oil and gas drilling have been the primary source for the atmospheric ethane trend reversal,” he said.

The study, published in Nature Geoscience, also indicated that emissions of total NMHC in the Northern Hemisphere are now increasing by roughly 1.2 million tons annually.

The findings from the flask network, which INSTAAR and NOAA have been operating for more than 10 years, were supported by additional measurements showing very similar ethane behavior from a number of continuous global monitoring sites, he said.

A component of natural gas, ethane plays an important role in Earth’s atmosphere. As it breaks down near Earth’s surface it can create ground-based ozone pollution, a health and environmental risk.

Chemical models by the team show that the increase in ethane and other associated hydrocarbons will likely cause additional ground-based ozone production, particularly in the summer months, he said.

“Ethane is the second most significant hydrocarbon emitted from oil and gas after methane,” said Helmig. “Other studies show on average there is about 10 times as much methane being emitted by the oil and gas industry as ethane.”

There is high interest by scientists in methane since it is a strong greenhouse gas, said Helmig. The new findings on ethane increases indicate there should be more research on associated methane emissions.

Other CU-Boulder co-authors on the study included INSTAAR graduate student Samuel Rossabi and researcher Jacques Hueber. The paper also included scientists from NOAA, the National Center for Atmospheric Research in Boulder, The University of York in York, England and institutes in Germany, Switzerland, Belgium and New Zealand.