The frequency of nuisance tidal flooding in many U.S. cities increased as predicted for the 2015 meteorological year, from May 2015 to April 2016, according to a new NOAA report.

In some cities, the days of nuisance flooding exceeded trends and broke records, especially in the southeastern U.S and Gulf Coast, which may be due to a strong El Niño compounding already rising sea levels. 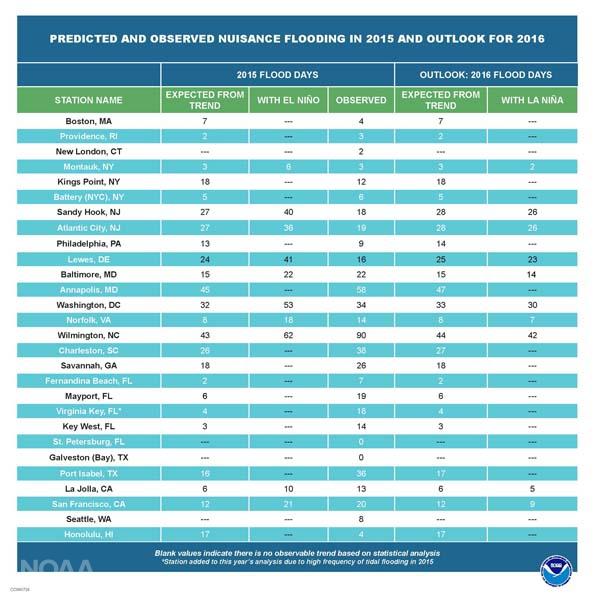 Predicted and observed nuisance flood in 2015 and outlook for 2016. CREDIT NOAA

Nuisance flooding, which causes such public inconveniences as frequent road closures, overwhelmed storm drains and compromised infrastructure, now occurs with high tides in many locations due to climate-related sea level rise, land subsidence, and the loss of natural barriers.

These findings are a continuation of annual nuisance flooding monitoring and experimental predictions led by NOAA scientists William Sweet, Ph.D., and John Marra, Ph.D. The 2015 outlook, which covered the period between May 2015 through April 2016, indicated that mid-Atlantic and West Coast communities could experienced an increase over the trend in the number of nuisance flooding days due to likely higher sea levels during El Niño, which increases the reach of storm surges and high tides.

“Sea level rise is continuing and flooding impacts are happening now,” said Sweet, an oceanographer with NOAA’s Center for Operational Oceanographic Products and Services. “The upward trend in nuisance flooding is an ongoing issue. Last year we broke several records, and trends show that we’ll likely continue to do so in the future. Coastal communities should expect a new normal in nuisance tidal flooding and prepare for potential impacts.”

The new report, 2015 State of U.S. Nuisance Tidal Flooding, highlights nuisance flood during the 2015 meteorological year and compares it to the outlook at 28 NOAA tide stations around the United States, which have collected data for more than 50 years. It also provides a new outlook for the 2016 meteorological year, taking into account the La Niña conditions anticipated to develop in the coming months. La Niña typically has less effect on tidal flood frequencies compared to El Niño, however the nuisance flooding trend is still increasing.

The outlook for 2016 shows that the cities with the highest frequency of nuisance flooding will likely be:

Along the California coast, less than 10 days are expected at La Jolla and San Francisco, a decrease from 13 and 20 days observed in 2015, respectively.

Nuisance flooding is increasing along U.S. coasts due to sea level rise. The extent of nuisance flooding depends on multiple factors, including topography and land cover. The study defines nuisance flooding as a daily rise in water level above minor flooding thresholds set locally by NOAA weather forecasters and emergency managers for coastal areas prone to flooding.