I don’t like to use the word “fraud”, and I can’t recall if I’ve ever used it in a title. In this case it is warranted. Brandon Shollenberger writes of a new book, The Climate Wars:

How the Consensus is Enforced,  that proves without a doubt that John Cook and his “Skeptical Science” team are nothing but a gang of “say anything” activists, and that the much repeated “97% consensus” is indeed nothing more than a manufactured outcome.

He writes via email:

I recently “hacked” Skeptical Science again to find CONFIDENTIAL material.  By which I mean I download some PDF files from publicly accessible locations and found out one of them was a manuscript submitted for publication, which as a submitted manuscript was supposed to be kept CONFIDENTIAL.  Instead, it was posted in a location anyone could access.

The paper is rather remarkable in that it admits several of the criticisms of the (in)famous Cook et al consensus paper, such as saying:

During the rating process of C13, raters were presented only with the paper title and abstract to base their rating on. Tol (2015) queries what steps were taken to prevent raters from gathering additional information. While there was no practical way of preventing such an outcome, raters conducted further investigation by perusing the full paper on only a few occasions, usually to clarify ambiguous abstract language.

Raters had access to a private discussion forum which was used to design the study, distribute rating guidelines and organise analysis and writing of the paper. As stated in C13: “some subjectivity is inherent in the abstract rating process. While criteria for determining ratings were defined prior to the rating period, some clarifications and amendments were required as specific situations presented themselves”. These “specific situations” were raised in the forum.

But even this admission is a deception as anyone who looks at the forum would know fully well the discussions between raters were not merely to seek clarifications and amendments, but included raters straight up asking one another how they would rate various papers.

There’s plenty more to be said about all this, and I wrote a post about this, but I wrote a more thorough discussion in a new eBook I just published.  I’ve been meaning to publish an eBook on this topic for some time, but prior to this latest discovery, I couldn’t find a way to write it properly.  Now I think I have.

A couple of excerpts from my reading of it are below.

The difference between how Skeptical Science behaves in private and how it behaves in public is both troubling and insightful. It is important not because being able to label people hypocrites is a big deal but because it reveals the lies and deceptions the group uses to promote its consensus message. For instance, we saw above the original plan was to describe their results on the consensus about global warming in the form of:

But they chose to abandon this plan and describe the results in the form:

Among abstracts expressing a position on AGW, 97.1% endorsed the consensus position that

After seeing their results and realizing how embarrassing it’d be for them to say:

But the reality is the Skeptical Science group intentionally misled people time and time again.

This also shows the falsity of the claim in the paper:

Each abstract was categorized by two independent, anonymized raters. The study participants were all members of the same Skeptical Science group, were often friends and they were actively talking to one another about how to categorize papers. There may be some semantic parsing which would make the claim these raters were “independent” true, but Cook and his colleagues must have known there’s no way anyone reading their paper would have guessed the

“independent” raters were talking to one another about how to rate things:

Similarly, while it may be true the raters were only presented certain information as part of the

rating system, Cook and his colleagues intentionally left out the fact the raters cheated and looked up

That gave the readers an impression Cook and colleagues knew would be false.

Even if one feels their statements weren’t technically lies, they were clearly attempts to deceive people.

Perhaps the most remarkable example of this sort of deception, however, is the fact the paper claimed these raters were “independent.”

You can find the new eBook here: 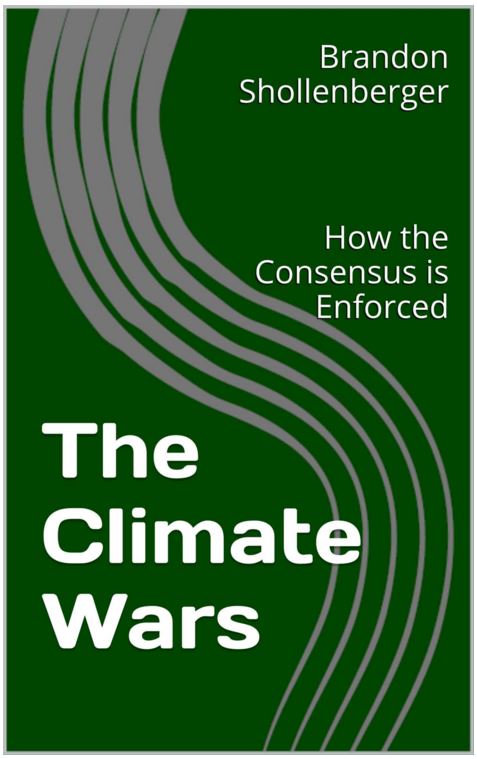 280 thoughts on “The Cook '97% consensus' paper, exposed by new book for the fraud that it really is”