Via the GWPF – Paris Climate Poker On A Knife-Edge 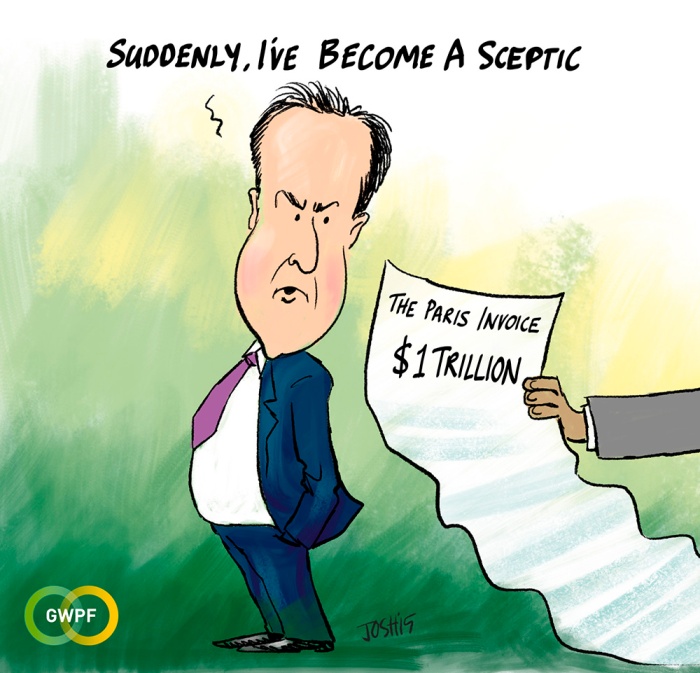 Britain and other rich countries face demands for $3.5 trillion (£2.3 trillion) in payments to developing nations to secure a deal in Paris to curb global warming.

Developing countries have added a clause to the latest draft of the text under which they would be paid the “full costs” of meeting plans to cut emissions. The amount paid by rich countries is a key unresolved issue at the climate conference in Paris, which is supposed to end tomorrow. The latest version of the text has more than 360 points of disagreement. –Ben Webster, The Times, 11 December 2015

The night saw an ugly brawl as US secretary of state John Kerry threatened that developed countries, including the US, would walk out of the agreement if it help up the wall of differentiation or if it was asked to commit to a road-map or a goal to deliver on its financial obligations in the Paris agreement. “You can take the US out of this. Take the developed world out of this. Remember, the Earth has a problem. What will you do with the problem on your own?” he said behind closed doors in negotiations to other ministers on the second revised draft of the Paris agreement. –Nitin Sethi, Business Standard, 11 December 2015

US Threatens To Walk Out If Financial Obligations Made Legally Binding

Paris climate talks got pushed well beyond their scheduled deadline of Friday 6 pm. The French foreign minister Laruent Fabius formally announced that the next, and hopefully the final draft, of the Paris package would be brought out on Saturday morning followed by negotiations in afternoon. Bruised by the fractious arguments that had split countries along the developed-developing lines through the night between Thursday and Friday, many negotiators across the divide assessed that the talks would stretch in to Sunday.

The night saw an ugly brawl as US secretary of state John Kerry threatened that developed countries, including the US, would walk out of the agreement if it help up the wall of differentiation or if it was asked to commit to a road-map or a goal to deliver on its financial obligations in the Paris agreement. “You can take the US out of this. Take the developed world out of this. Remember, the Earth has a problem. What will you do with the problem on your own?” he said behind closed doors in negotiations to other ministers on the second revised draft of the Paris agreement.

He added, “We can’t afford in the hours we are left with to nit-pick every single word and to believe there is an effort here that separates developed countries from developing countries. That’s not where we are in 2015. Don’t think this agreement reflects that kind of differentiation.”

Making a veiled threat again that the agreement could fail if the US was pushed for financial obligations, Kerry said, “At this late hour, hope we don’t load this with differentiation…I would love to have a legally binding agreement. But the situation in the US is such that legally binding with respect to finance is a killer for the agreement.”

His remarks were made during the Indaba negotiations at the night between Thursday and Friday. Right after his short intervention Kerry left the negotiating room while other US delegates stayed back, making delegates from other countries point out that the sessions were to exchange views and not just threaten and leave.

Kerry’s intervention was later followed by developed countries collectively refusing to give a road-map for delivery of their financial obligations behind 2020. EU said it was not acceptable and umbrella group of countries which includes the US too demanded scuttling such a plan.

IN the past the developed countries have been unable to deliver financial flows against their commitments of providing US $ 100 billion annually by 2020. The OECD produced a report recently claiming the rich world had delivered US $ 62 billion by 2014 which the rich countries showed off at the Paris talks. But developing countries, including India, noted gross levels of double accounting and counting of high interest loans as climate finance – which is seen as a reparation cost. The developing countries asked that a road-map for delivery of the US $ 100 billion be fixed at Paris and that the accounting rules too be set by the UN climate convention blocking attempts of creative accounting by developed countries. This was partially reflected in the second revised draft of the Paris agreement.

“Kerry’s statement against differentiation and legal obligations was shocking. They (developed countries) see this is an opportunity to walk away from their obligations. At all costs the developed countries want the rules rewritten in departure from all the principles and provisions of the convention,” said Meena Raman, from the observer group Third World Network.

The collective pushback from the developed countries got the rest of the developing countries together as well. Southern Sudan, a country formed only four years ago after strife and war, said, “Some developed countries are proposing all parties (countries) shall provide finances but many developing are poor vulnerable, with special circumstances and will not be able to pay for mitigation, adaptation and loss and damage because the amounts we are talking of are significant.”

He added, “We cannot afford to use the money for hospitals saving lives, providing education, water and schools to be used on these matters. The agreement needs to provide adequate predictable new additional and verifiable resources.”

Some of the umbrella group of countries also said they were not in favour of a review to see if the support provided for adaptation to climate change by developing countries was adequate or not.

India, China, Argentina and many other developing countries intervened through the night pushing for differentiation as well as explicit financial obligations from the rich world.

The talks remained inconclusive and the French foreign minister announced the extension of the talks beyond deadline promising to meet countries and groups in bilateral format through Friday and hope to produce the ultimate draft of the text on Saturday.

Key issues that have delayed the agreement

1. Should developed countries have a legal obligation to deliver finances against a road-map

2. Should developing countries that do not have historical responsibility for emissions also contribute to climate flows

4. Should the actions of developing countries be linked, even if weakly, to the provision of finance and technology or should they be treated as par with developed countries during next ratchet up of emission reduction commitments

5. Should there be a periodic review of delivery of finance and technology by developed world or not

6. Should the long term goal of the agreement unambiguously be to keep global temperature rise below 1.5 degree by 2100 or should the agreement refer hedge on this goal

7. Should poor and vulnerable countries continue to hold rights to file for damages and liability against permanent loss and damage caused due to climate change

The UN climate talks are officially delayed until Saturday. Overnight negotiations could not result into convergence on many issue.

The next and final text, which was supposed to come on Friday, will now be released on Saturday morning and discussion will begin over it the same afternoon to bring out a global deal latest by the evening to save the world from the impacts of climate change through countries’ post-2020 actions.

As overnight negotiations could not result into convergence on many issues, the French foreign minister and COP21 president Laurent Fabius had to officially announce this morning that he would not present the text on Friday evening as he had thought earlier (to meet the deadline as the Paris talks was scheduled to be concluded on Friday by arriving at an agreement).

As overnight negotiations ran on, Fabius will now present the final text on Saturday morning so that the talks would conclude by the evening.

He said, “There is still work to do. Things are going on in right direction”.

Most of the decisive issues are still open. It include the climate finance, transparency of action and the crucial one on how to share responsibility between developed and developing countries.

China has strong objections on differentiation as it thinks the second text that came on Thursday night was an attempt to dilute this provision. Egypt on behalf of African Group, on the other hand, wants the ‘greenhouse gas neutrality’ should be removed from the second version of the text.

Note: shortly after publication the first paragraph was reformatted to include some missing headline text.