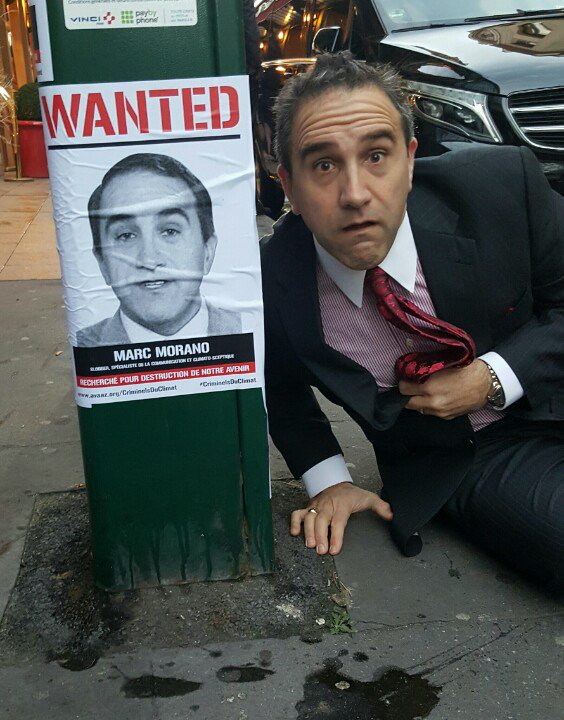 The seven most insidious fossil fuel lobbyists in Paris to weaken attempts to agree a global climate deal have been named and shamed as ‘climate criminals’ in a dossier published by the global citizens movement Avaaz.

The group, which spearheaded last weekend’s climate marches which saw 785,000 people take to the streets globally, posted over a thousand ‘Wanted’ posters outside 5-star hotels in the French capital on Monday morning. The poster highlighting the seven most notorious dirty energy lobbyists unearthed from the list of more than 50,000 delegates at summit.

On Monday morning,  Avaaz ‘Climate Cops’ will hand out flyers outside key Metro stations leading to the Le Bourget with photos of the lobbyists, who are expected to ramp up their efforts to derail a deal when ministers arrive this week to negotiate the deal.

Emma Ruby-Sachs, Acting Executive-Director of Avaaz says: “These lobbyists have come to Paris to sabotage a global deal for ambitious climate action, despite over 3.6 million citizens around the world calling for 100% clean energy. Ministers must listen to their people, not polluters, and refuse meetings with climate criminals who want to derail a deal the whole world wants.”

Each of the seven named lobbyists is renowned for their backroom dealings to to stop the transition to clean energy and push the interests of dirty fossil fuels. Some have resorted to harassing climate scientists and even calling for them to be ‘publicly flogged’.

Examples of lobbyists’ far-reaching influence within climate meetings include The World Coal Association setting up shop next to the COP19 summit in Warsaw in 2013 to convince negotiators to embrace coal as a solution to climate change.

This resulted in the Warsaw Communiqué promoting clean coal, which has been deemed as “a myth” by National Geographic. At the COP17 in Durban in 2011, the Carbon Capture and Storage Association (comprised of major fossil fuel and power companies) successfully lobbied for carbon credits for new coal plants.

With global warming a clear scientific reality, the world has become increasingly intolerant of the fossil fuel industry’s attempts to undermine climate science and climate legislation. The campaign comes off the back of recent cases cracking down on “climate criminals,” including the investigation into Exxon for allegedly lying to the public about the risk of climate change.

The dossier is published as part of Avaaz’s 100% Clean campaign, which has been backed by more than 3.6 million people.

Marc Morano made a statement by email:

Marc Morano, publisher of Climate Depot and producer of new ‘Climate Hustle’ film having its red carpet debut tonight in Paris: Climate Hustle tonight at the Cinéma du Panthéon at 7:30 PM.
Morano statement: “Since the ‘wanted’ posters for me are all over Paris, I have relocated to a secure undisclosed location. I hope my trip to Paris for ‘Climate Hustle’ red carpet premiere will go better than JFKs trip to Dallas.”

The “Wanted”-style posters went up in Paris late on Sunday. Credit Avaaz

From the New York Times:

Environmental activists pasted more than 1,000 “Wanted” posters outside luxury hotels here overnight, calling seven people who have ties to the fossil fuel industry or are skeptics of climate change “criminals.” The activists also distributed flyers with photographs of the seven.

“These lobbyists have come to Paris to sabotage a global deal for ambitious climate action,” said Emma Ruby-Sachs, acting executive director of Avaaz, the activist group that organized the stunt. “Ministers must listen to their people, not polluters, and refuse meetings with climate criminals who want to derail a deal the whole world wants,” she added.

Mr. Morano sent back a photograph of himself, looking mock-terrified, crouching next to one of the “Wanted” posters that had been posted in the Eighth Arrondissement.

“The posters are an exercise in silliness,” Mr. Morano said. “Climate skeptics are here promoting open debate and arguing to allow dissent. The idea that any alternative views amount to a ‘criminal’ perspective is obscene.”

Mr. Taylor, of the Heartland Institute, said in an email: “It is a shame that people must experience such vitriol and harassment when they make scientific arguments supported by scientific data. If such attacks must be made, however, I am glad it was my face that appeared on their posters. I will always be proud to stand up for free and open discourse and ultimate truth.”

The Heartland Institute is hosting a climate change conference of its own on Monday, at the Hotel California here. It posted on Twitter: “Eco-left activists put ‘Wanted’ posters outside our event space last night. We are not intimidated.”