On April 18, 1977, President Jimmy Carter announced his new energy policy. His speech included the following predictions of a dire future unless we repented of our evil ways:

I know that some of you may doubt that we face real energy shortages. The 1973 gasoline lines are gone, and our homes are warm again. But our energy problem is worse tonight than it was in 1973 or a few weeks ago in the dead of winter. It is worse because more waste has occurred, and more time has passed by without our planning for the future. And it will get worse every day until we act.

The oil and natural gas we rely on for 75 percent of our energy are running out. In spite of increased effort, domestic production has been dropping steadily at about six percent a year. Imports have doubled in the last five years. Our nation’s independence of economic and political action is becoming increasingly constrained. Unless profound changes are made to lower oil consumption, we now believe that early in the 1980s the world will be demanding more oil that it can produce.

The world now uses about 60 million barrels of oil a day and demand increases each year about five percent. This means that just to stay even we need the production of a new Texas every year, an Alaskan North Slope every nine months, or a new Saudi Arabia every three years. Obviously, this cannot continue.

Now we have a choice. But if we wait, we will live in fear of embargoes. We could endanger our freedom as a sovereign nation to act in foreign affairs. Within ten years we would not be able to import enough oil — from any country, at any acceptable price.

If we wait, and do not act, then our factories will not be able to keep our people on the job with reduced supplies of fuel. Too few of our utilities will have switched to coal, our most abundant energy source.

Inflation will soar, production will go down, people will lose their jobs. Intense competition will build up among nations and among the different regions within our own country.

If we fail to act soon, we will face an economic, social and political crisis that will threaten our free institutions.

His conclusion was that “We must start now to develop the new, unconventional sources of energy we will rely on in the next century.” So he started throwing money at the problem. His “solution”  involved inter alia:

• A “gas-guzzler” tax on automobiles

• A rebate on electric vehicles

• Taxes on aviation and marine fuel

Sound familiar? It should, as these are all parts of the current war on fossil fuels.

A year and a half from now, it will be the 40th anniversary of President Carter’s prophecies of catastrophe. And it will also be the 40th anniversary of the start of the subsidization of the solar and wind power sectors. These subsidies have currently reached astounding levels. Table ES2 from the US Energy Information Agency gives the subsidies of all types (direct expenditures, tax expenditures, R&D, rural utilities subsidy) for 2013, the most recent year available. Here are the results:

It also doesn’t include the implicit subsidy of renewables from the penalties imposed on fossil fuels (Carter’s gasoline taxes, “cap-and-trade” programs, the Kyoto Protocol, “carbon taxes”, and the like).

So we’re talking a playing field which has been tilted in favor of solar and wind energy by something on the order of at least a hundred billion dollars … how’s that going?

Well, yesterday I noticed that the new 2015 BP Statistical Review of World Energy had been released. So I thought I’d investigate the massive progress that the hundreds of billions of dollars of solar and wind subsidies in the US and other countries had bought us. Here’s the latest global data, read’em and weep … 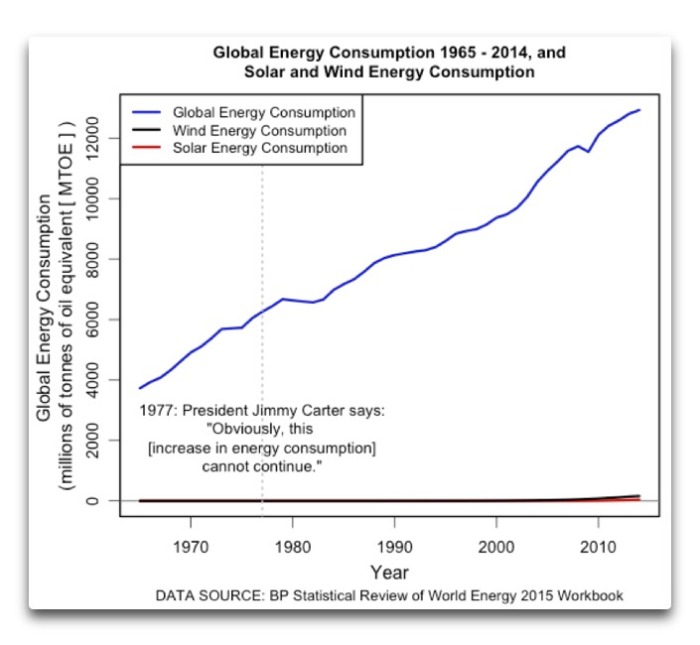 I bring all of this up for three reasons. The first is to show just how little our ~ hundred billion dollars in solar and wind subsidies has bought us. If that was supposed to be our insurance policy, it’s not only a failure, it’s a cruel joke. It’s cruel because that amount of money could provide clean water for everyone on the planet …

The second reason is to highlight the continuing failure of these “We’re all DOOOMED!! We’re running out of energy!” kind of prophecies. President Carter was neither the first nor the last of these serial failed doomcasters.

The third reason is to highlight the ludicrous nature of the claims that solar and wind are making serious inroads into the global demand for energy. They are not. Solar and wind are a rounding error. Despite almost forty years of subsidies, despite renewable mandates, despite carbon taxes, despite cap-and-trade, despite a hundred billion dollars spent on this Quixotic quest, solar and wind have barely gotten off the floor. Look at that chart, and give me a guess for how long it will take for solar and wind to catch up with fossil fuels.

Then give me a guess how long it would take if we removed all subsidies as we should.

It’s worse than that. Solar and wind can’t even keep up with just the increase in fossil fuels … fail. Massive fail.

As far as I’m concerned, giving one more dollar to either solar or wind subsidies is a crime against the taxpayer, as well as against the economy … after almost forty years of fruitless subsidies, they’ve had their chance and they still don’t measure up. Time to stop throwing good money after bad.

Best regards to each of you,

My New Request: If you think that e.g. I’m using the wrong method on the wrong dataset, please educate me and others by demonstrating the proper use of the right method on the right dataset. Simply claiming I’m wrong doesn’t advance the discussion.

266 thoughts on “Thirty-Eight Years Of Subsidies”