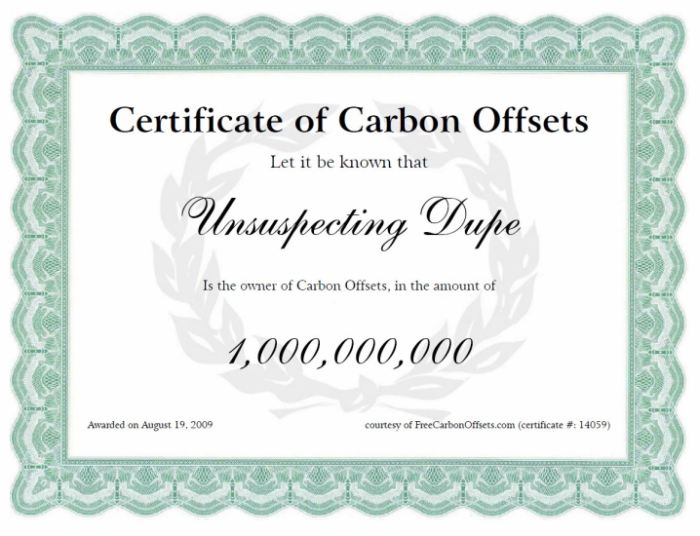 According to the BBC;

The vast majority of carbon credits generated by Russia and Ukraine did not represent cuts in emissions, according to a new study.

The credits may have increased emissions by 600 million tonnes.

In some projects, chemicals known to warm the climate were created and then destroyed to claim cash.

As a result of political horse trading at UN negotiations on climate change, countries like Russia and the Ukraine were allowed to create carbon credits from activities like curbing coal waste fires, or restricting gas emissions from petroleum production.

Chinese chemical companies’ use of offsets has a ‘total lack of environmental integrity’, says Connie Hedegaard

The European commission is planning to clamp down on a £1.6bn carbon trading scam. The use of carbon permits from industrial gas projects in China could be banned because of their “total lack of environmental integrity”, the climate change commissioner, Connie Hedegaard, has told the Guardian.

The BBC article reports that Russia strongly rejects claims that many Eastern projects broke the rules;

Michael Yulkin, from Russia’s Environmental Investment Centre rejected the idea that many of these Eastern projects broke the rules.

“All the projects have been validated and the additionality has been proved – it was all following the rules and if the rules allowed them to be in, so you have them in.”

Why are carbon markets so susceptible to fraud and sharp trading? I have a theory. In a normal market, fraud damages the financial interests of at least some of the participants, so there is a strong incentive to report fraud to the authorities, to punish fraudsters, and to recover stolen assets.

But in a carbon market, most market participants actually benefit from fraud. The sellers of carbon credits benefit when they sell fraudulent credits, because they are making money for nothing. The buyers of carbon credits benefit from a market flooded with fraudulent carbon credits, because the oversupply caused by fraudulent credits helps to keep prices down. Corrupt officials benefit financially, when they receive bribes to ignore the fraud. The only people who are disadvantaged by carbon fraud, are investors who tried to follow the rules, to produce “genuine” carbon credits, and politicians and activists who naively expected the carbon market to deliver emissions reductions.