Today I begin a new feature, “Throwback Thursday” with the purpose of highlighting past claims of climate doom made by scientists, pundits, and alarmist activists…that have not come true. It’s a bit of a take off from the “Throwback Thursday” on Facebook, where people post old pictures from their past, except here, it’s not just the age, it’s the fact that these lousy predictions really do deserve to be “thrown back” into the faces of the people that made them.

We’ll examine each claim, show it exactly as it was made and the context, and then show why it failed in the present or near present.

If you have some you’d like to see covered, put them in WUWT Tips & Notes (see it on the menu bar above) and send it in with the [Throwback Thursday] tag on it. 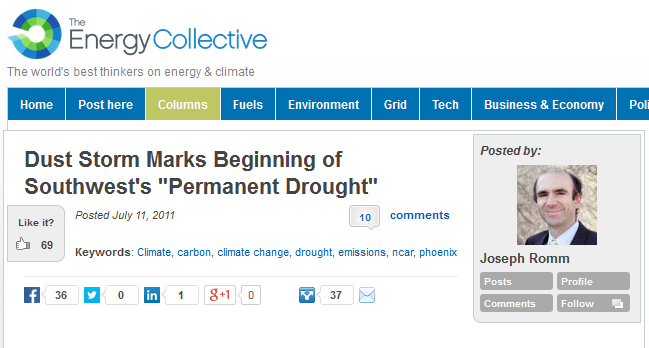 Back in April, the USGS released a report on Dust-Bowlification that concluded drier conditions were projected to accelerate dust storms in the U.S. Southwest.  In large parts of Texas and Oklahoma now,  the drought is more intense than it was during the Dust Bowl of the 1930s.

In 2007, Science (subs. req’d) published research that “predicted a permanent drought by 2050 throughout the Southwest” — levels of aridity comparable to the 1930s Dust Bowl would stretch from Kansas to California.  Last year, a comprehensive literature review, “Drought under global warming: a review,” by NCAR found that we risk multiple, devastating global droughts worse than the Dust Bowl even on moderate emissions path.  Another study found the U.S. southwest could see a 60-year drought this century.

So the monster dust storm — a haboob — that hit Phoenix is just the shape of things to come for the entire Southwest.

He’s referring to this video:

WHAT HAS HAPPENED SINCE:

And as far as “permanent drought” goes, a year later in July 2012, It looked like Romm’s permanent drought prediction might come true, as much of the CONUS was under drought conditions, a whopping 79.98% was under some level of drought…

…but now that has dropped to less than half that value, and the southwest is recovering. There are values in Arizona that exceed 200% of normal precipitation for the region, and U.S looks quite wet this last month in many places.

So much for Joe Romm’s prediction of “permanent drought”. Maybe he’d do better to study what happens to precipitation with ENSO patterns rather than wail about climate.

h/t to Tom Moran and to Chip Knappenberger for some ideas in this post.