Salient firsts in a child’s discovery of the world are often treasured moments for doting parents: a toddler’s first encounter with a friendly dog, his first go on the ice, his first hard spring rain…

Neither is it wrong for a father, steeped in the constant drumbeat of global-warming scare stories, to magnify the special moment with his worries about the future:

“When he opened his mouth to taste the rain,” said father Jason Spates, ”I was thinking, some day we may tell stories about green lawns, water in fountains and pools in residential backyards.” 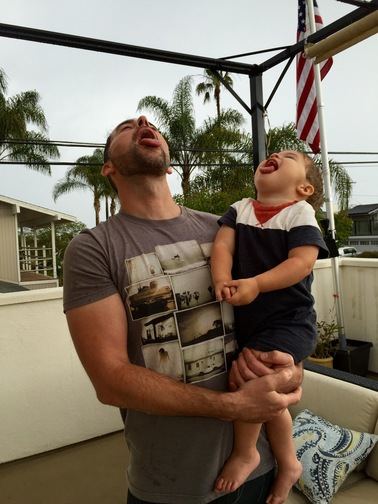 But when CBS spins this adorable human interest anecdote with the headline: “Drought So Bad This California Kid Has Never Seen Rain,” and introduces it as a “sign of the times” over an image of a cracked lake-bed labeled DROUGHT EMERGENCY, they really need to do some fact checking.

The May 15th news story references a rain the day before in Dana Point, on the southern edge of Los Angeles, where according to Weather Underground there was an accumulation of .26 inches of rain on the 14th.

It may well be that young Mr. Spates was never alert to the rain before. It is obviously not unusual for a toddler to at some point have his first conscious awareness of a sudden rain, and of course it is lovely for his parents to grab the camera and share some pictures. (They’re even flying an American flag. Nice.) And how would daddy Spates know that the world has not warmed (according to the more reliable satellite temperature record) since before the last big rain-bringing El Nino in 1998?

It’s pretty hard to blame the switch from wet to dry on an increase in global temperature that has not occurred, but no mainstream anti-denial “believer” news source like CNN or CBS will ever let their readers see this information, so just a reminder from Christopher Monckton’s latest update on “the pause”:

Of course a lack of warming is not necessarily good news on the drought front. Warming means a faster hydrological cycle which means more total rain. If the Pacific Decadal Oscillation turns to an extended cold phase (as past patterns predict) and if the sun stays quiet (as solar scientists expect), then we could easily be in for a long dry cold spell. Now that is something worth worrying about.

If only the greens didn’t control the state government then California could prepare for this likelihood by building a fleet of thorium powered desalinization plants, providing water and power in abundance. Makes a lot more sense than Jerry Brown’s current plan to unplug 40% of our existing energy infrastructure within 15 years and 80% of our existing energy infrastructure by 2050 while sacrificing the state’s water and farming to the Delta Smelt.

Will “the children” (when they are no longer children, and have to worry about children of their own) really thank us for leaving them in the dark with unreliable water supplies? “Thanks dad” is susceptible to multiple intonations.