At the website deceptively named SkepticalScience, they list “Climate Changed Before” as the skeptics’ #1 “mythical” argument. But the website’s authors have fabricated a straw man argument writing, “The ‘climate changed naturally in the past’ argument is a logical fallacy known as non sequitur, in which the conclusion doesn’t follow from the arguments.  It’s equivalent to seeing a dead body with a knife sticking out the back, then arguing the death must be natural because people died naturally in the past.

It fails to even consider the available evidence.” Then after wading through theoretical gish-gallop, the Skeptical Science author concludes their argument with a non-sequitur of their own-“Past climate change actually provides evidence that humans can affect climate now.”

It would be more accurate if they concluded, “past climate change provides evidence of how human models have totally distorted recent climate change.” SkepticalScience misdirects our attention away from the evidence such as the natural warming cycle that happened in the 1920s-40s; a natural warming that occurred before any theoretical energy imbalance was detected. And more importantly, a warming that climate models have failed to accurtely reproduce. The Greatest Climate Myth of All argues we can confidently blame CO2 for the warming of the 80s and 90s because models of “natural climate change” cannot simulate the most recent warming unless more heat is added proportional to rising CO2. But their models of how “Climate Changed Before” have been horrendously incomplete, and have never generated enough warmth to explain the higher temperatures that occurred naturally in the 1920s-40s.

The Greatest Climate Myth of All was quickly popularized by David Attenborough and England’s climate scientist Peter Cox in the video seen below. Attenborough accurately introduced the climate debate’s key question. “How do we distinguish between climate variations due to natural causes versus those induced by human activity?” But they then provided a mythical answer. Dr. Cox walks along a graph with an orange line depicting 150 years of reconstructed global temperatures. (Lets put aside the argument that data homogenization nearly doubled the temperature rise in the 80s and 90s.) He then compares that reconstructed global average temperature to temperatures modeled from just natural factors (the green line) and, like a clever magician induces you believe the Greatest Climate Myth saying, “the green curve can reproduce reasonably well mid century warming.” But the models did no such thing. The models grossly underestimated the mid century warming by as much a 0.5° C. Even their modeled temperatures from the 1860s were warmer than 1940s. So the real question remains. How much of the increasing divergence between modeled and observed temperatures after the 1970s is simply due to bad modeling of “natural climate change”?

In the simplest of terms every study that has attributed the recent warming of the 1980s and 90s to rising CO2 has been based on the difference between their models’ reconstruction of “natural climate change” with their models’ output of “natural climate change plus CO2.” However the persistent failure of their models to reproduce how “climate changed before,” means any attribution of warming due to CO2, is at best unreliable and at worse a graphic fairy tale. And as we will see in the figures below, climate models not only failed to capture the 1920s to 40s warming, but when CO2 and sulfates were added to better approximate warming during the 80s and 90s in the extra-tropical northern hemisphere, the models transformed the warming period of the 20 to 40s into an imaginary cold period.

“The huge warming of the Arctic that started in the early 1920s and lasted for almost two decades is one of the most spectacular climate events of the twentieth century. During the peak period 1930–40, the annually averaged temperature anomaly for the area 60°–90°N amounted to some 1.7°C. Whether this event is an example of an internal climate mode or is externally forced, such as by enhanced solar effects, is presently under debate. This study suggests that natural variability is a likely cause, with reduced sea ice cover being crucial for the warming.”1

“As can be seen from Fig. 1, it was a long-lasting event commencing in the early 1920s and reaching its maximum some 20 years later. The decades after were much colder, although not as cold as in the early years of the last century. It is interesting to note that the ongoing present warming has just reached the peak value of the 1940s, and this has underpinned some views that even the present Arctic warming is dominated by factors other than increasing greenhouse gases. However, other authors concluded that the present warming in the Arctic is dominated by anthropogenic greenhouse gas forcing”.[emphasis added]

The authors who believed the recent warming was due to rising CO2, presented their arguments in a separate 2004 paper Arctic Climate Change: Observed And Modeled Temperature And Sea-Ice Variability2, and their diagrams of modeled output provide a vivid illustration of how poorly natural climate change is modeled and how adding CO2 distorts observed climate reality.

Below I have broken the 4 panels of their Figure 1 into separate panels to facilitate comparisons and discussion. Northern hemisphere extra-tropical temperature anomalies are indicated by color, with temperatures down to 1 degree below average colored blue, and up to 1 degree above average colored red. Figure 1a depicts the 20th century reconstruction of observed temperatures

In their “control run” below (Figure 1d), they included all the known physics believed to affect climate change except anthropogenic greenhouse gases and sulfate aerosols to produce their representation of “natural climate change.” The result as seen in Figure 1d, was a relatively warmer period that lasted for about 15 years. However more importantly, the simulated warming was produced only after 150 years of integration and never corresponded to either of the warm periods between 1920 and 1950, or between 1980 and 2000. So the authors randomly placed the modeled warming on the timeline. In other words their models failed to reproduce the observed climate change – whether it was natural or anthropogenic. However assuming that models can accurately recreate natural climate change in the past, they argued “no comprehensive numerical-model integrations [Fig. 1d] have produced the present global warm anomaly [Fig. 1a] without including observed anthropogenic forcing.” 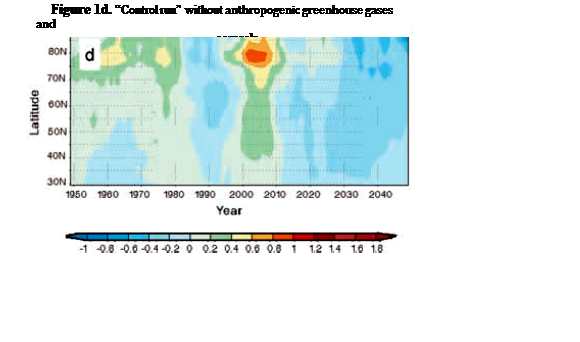 In order to “prove” CO2 has caused the recent warming, they added the historical rise in CO2 to their models. And voila! They reported massive warming in the 80s and 90s. Simultaneously however their models did something quite revealing.

According to many climate scientists like the IPCC’s Dr Lenart Bengtsson, the warming that began in the 20s was, “one of the most spectacular climate events of the twentieth century”; yet the models obliterated that observed warming and slightly warmed the cooler 60s and 70s. Although their absurd inconsistency is obvious, the authors ignored the eradication of earlier warming, yet took great pride in the models representation of the most recent warming writing, “The patterns compare well with the last two decades of observed warming, although the modeled warming occurs slightly earlier and also encompasses lower latitudes than observed.” 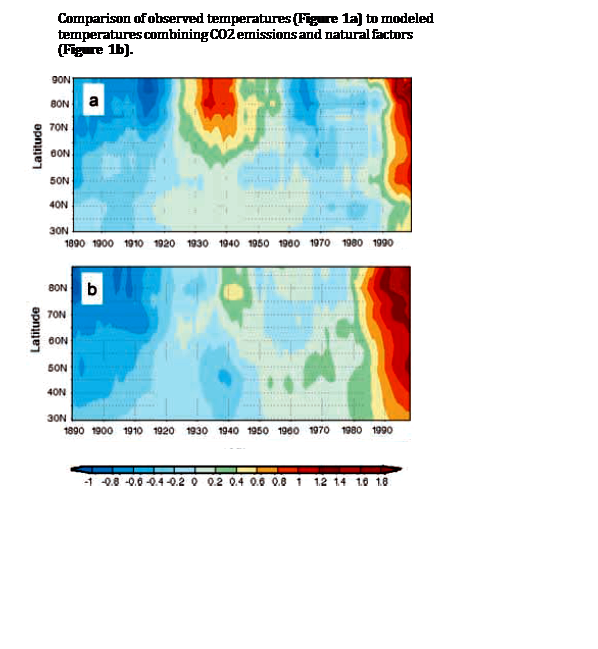 Models driven by heat attributed to rising CO2 have always run hotter than observed temperatures. So the fudge factor of choice has been to add the cooling effect of sulfates. Sulfates are useful because they can be attributed to either volcanoes or human industrial waste, even though reliable data is lacking. But to constrain the excessive heating in models driven by rising CO2, they added sulfates. But in so doing they turned the spectacular warming of the 20s and 40s, into a cold period. When all was said and done, the model produced a colorful but mythical “hockey stick” (Figure 1c) that looked nothing like observed temperatures (Figure 1a).

So it becomes apparent why alarmists like SkepticalScience push “Climate Changed Before” as their #1 climate myth. By downplaying the previously observed warming earlier this century, the public is less likely to be aware that climate models can only produce a mythical representation of climate change for the century (Figure 1c).

It is also becomes clear why models driven by rising CO2 and sulfates have persistently failed to capture the natural cycles of the Pacific Decadal Oscillation (PDO). The warm phase of the PDO ventilates heat stored in the ocean via more frequent El Niños. The rapid warming in the 80s and 90s corresponds with a warm PDO cycles as did the observed warming in the 1920s and 1940s. But their climate models eradicate that earlier cycle. As Dr. Pierrehumbert admitted in his 2012 AGU lecture, Ocean heat uptake has decadal fluctuations and “Models do not do the multi-decadal ocean heat uptake fluctuations well at all.”

The failure to model how climate has changed naturally in the recent past, and the failure to model the tremendous impact of ocean oscillations explains why those same models have failed to predict the ongoing 17-year hiatus in warming once the PDO re-entered its recent cooling phase. Nor can rising CO2 explain why the U.S. Climate Reference Network’s (USCRN) land surface data, the upper 700 meters of Argo’s ocean data and satellite data all show a cooling trend since 2003. It is also explains why alarmists fail to comprehend the cyclic changes in Arctic sea ice that was discussed in the essay Why Antarctic Sea Ice Is the Better Climate Change Indicator. The oceans store and re-distribute solar heat and unlike CO2, ocean oscillations can explain both the recent cooling trend and the past warming events.

In part 2, I will demonstrate how alarmists have misconstrued the change in the ranges of marine organisms to argue that those range changes provide evidence that is “consistent with CO2 warming”. But that is the second greatest climate myth. Those range changes most assuredly correlate best with natural ocean oscillations.

48 thoughts on “The Greatest Climate Myths of All – Part 1”