Earl looks to have a path grazing the East Coast of the USA. Cape Hatteras, Long Island, and Cape Cod may be in a portion of the projected path.

Satellite image follows along with a recent bulletin. 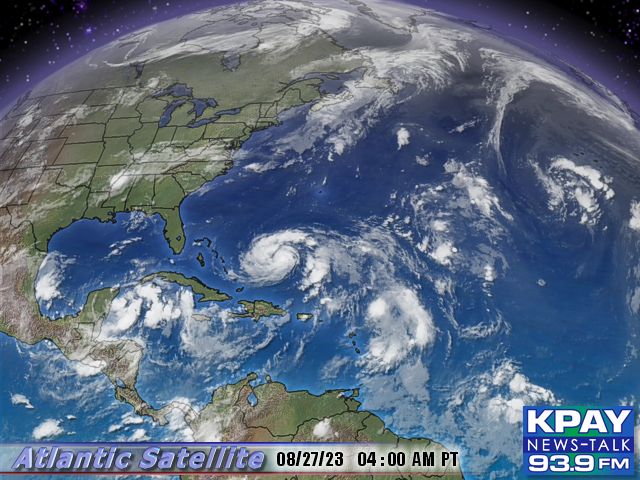 Just a SLIGHT drift to the west of latest projected path by the eye, and this one could be a direct hit on a whole bunch of people.

Methow Ken says:
August 31, 2010 at 11:28 pm
Just a SLIGHT drift to the west of latest projected path by the eye, and this one could be a direct hit on a whole bunch of people.

Tell me about it. I live just outside Ocean City Md and we have already got a “go bag” ready, the dog kennels staged in the bed of th pickup and non perishable food ready to go.

Seeing that it’s tracking Northwards along the East coast of America, I suspect we’ll get some of it in Europe before it blows itself out. It won’t be the first time that’s happened, but we are never adequately prepared here.

Could make for some soggy football this weekend

Earl will be a great media event for the networks.
After air-kissing the coast around Cape Hatteras, the cone of the predicted track for Earl has been shifted a bit toward the east, misssing most of the target rich coastal US communities. Ultimate target — New Brunswick, Nova Scotia, PEI, Quebec, & Newfoundland, before its remnants head out to the west coast of Greenland.
While its close proximity will put a damper on swimming and boating with rain bands and rough surf along the US coast, the Labor Day weekend won’t be a washout. Even the elite will be able to enjoy Cape Cod’s facilities on Sunday & Monday.

Snow, then heat, then a hurricane. Proof of global warming. None of these things ever happened before.

A question: how much heat do storms like Earl taken out of the ocean?

Looking awfully “Floyd-like”. I’m spending today replacing my sump pump and stocking the pantry. Should be an interesting coupla days for the east coast.

I’ve seen similar pictures of tropical storms going “nearly” to Massachusetts many times – but the weather in Massachusetts was never more spectacular than just “somewhat bad”. 😉

This is pretty much a glorified nor’easter for New England…nothing they haven’t seen before. Definitely headed for the beach to see some of the wave action!

Back in the 90’s Wife’s cousin was living on Cape Cod-She spent the previous 30
years on the southern Oregon coast. At her husband’s favorite restaurant, there was
a Cat one headed their way, She said to the waiter who was frantic about the 75 mph
winds. She said:”75?! you are worried about only 75?!” “Where are YOU from lady?
the Waiter asked…..

Strongest hurricane to make it this far north in nearly 20 years. Coincidence that sea temperatures off the east coast are running about 8dF above “normal”? Oh, I forgot, that’s a hoax, right?

wasn’t it during the cooler 60’s and 70’s when new england got hit more often hurricanes?

Earl and the East Coast
Lord Christopher Monckton is an “EARL” I think – lol!

Justin Time says:
September 1, 2010 at 9:36 am
Strongest hurricane to make it this far north in nearly 20 years. Coincidence that sea temperatures off the east coast are running about 8dF above “normal”? Oh, I forgot, that’s a hoax, right?

And he completely misses the logical fallacy in his statement and postion….
According to Warmists 2010 is THE WARMEST YEAR EVER!.
So explain why 20 years ago when the temperatures were lower then now; you got a Hurricane stronger this far north when CAGW says that Hurricanes are suppose to get stronger when the temperatures are higher from CO2?

Justin Time says:
September 1, 2010 at 9:36 am
Strongest hurricane to make it this far north in nearly 20 years. Coincidence that sea temperatures off the east coast are running about 8dF above “normal”? Oh, I forgot, that’s a hoax, right?

20 whole years huh… wow that’s gotta be unprecedented …when did Anecdotalism become a field of study?

Maybe we shouldn’t tell Justin about Hurricane Hazel back in 1954 that was a Cat 4 hurricane when it hit land in North Carolina with winds of 140 MPH.

Hurricane Hazel was the deadliest and costliest hurricane of the 1954 Atlantic hurricane season. The storm killed as many as 1,000 people in Haiti before striking the United States near the border between North and South Carolina, as a Category 4 hurricane. After causing 95 fatalities in the US, Hazel struck Canada as an extratropical storm, raising the death toll by 81 people, mostly in Toronto. As a result of its damaging effects and high death toll, its name was retired and will never again be used for a hurricane in the North Atlantic basin.

http://en.wikipedia.org/wiki/Hurricane_Hazel
And there is the Great Hurricane of 1944 which might confuse him since it too was a Cat 4 with 140 MPH winds.

A hurricane was first detected on September 9, northeast of the Lesser Antilles. It likely developed from a tropical wave several days before. It moved west-northwestward, and steadily intensified to a 140 mph (230 km/h) major hurricane on the 12th, northeast of the Bahamas. Around this time, the Miami Hurricane Warning Office designated this storm The Great Atlantic Hurricane to emphasize its intensity and size, which appears to be the first time a name was designated by the office which evolved into the National Hurricane Center.[1] The hurricane turned northward and hit the Outer Banks later that day.
Moving rapidly to the northeast, the hurricane maintained its strength somewhat at the time of its Long Island landfall on September 15, hitting as a Category 3 hurricane[2]. Shortly thereafter it crossed the Rhode Island coastline, and after emerging into the Massachusetts Bay it hit Maine, just before becoming extratropical. The non-tropical system continued northeastward, and merged with a larger extratropical low on the 16th south of Greenland.

http://en.wikipedia.org/wiki/1944_Great_Atlantic_Hurricane
And the Hurricane of 1938 we definitely need to with hold since it reached Cat 5:

The New England Hurricane of 1938 (or Great New England Hurricane or Long Island Express or simply The Great Hurricane of 1938) was the first major hurricane to strike New England since 1869. The storm formed near the coast of Africa in September of the 1938 Atlantic hurricane season, becoming a Category 5 hurricane on the Saffir-Simpson Hurricane Scale before making landfall as a Category 3 hurricane [1] on Long Island on September 21. The hurricane was estimated to have killed between 682 and 800 people,[2] damaged or destroyed over 57,000 homes, and caused property losses estimated at US$306 million ($ 4.72 billion in 2010).[3] In 1951, damaged trees and buildings were still to be seen in the affected areas.[4] To date it remains the most powerful, costliest and deadliest hurricane in New England history.

http://en.wikipedia.org/wiki/New_England_Hurricane_of_1938
And we have to keep this most secret, the Cat 4 storm of 1821:

For those who live in the Garden State and the New York City area, and think that a major hurricane isn’t possible here better think again. This weekend commemorates the 185th anniversary of the Great Hurricane of 1821. On September 3rd that summer, a Category Four Hurricane rapidly moved up the east coast. As a matter of fact, the storm moved from North Carolina’s outer banks to the New York City area in just ten hours. This storm struck the Cape May area of extreme South Jersey, and moved up along a path that is covered by the Garden State Parkway today.
Like the major storms of today, this hurricane caused a lot of damage and devastation, but it also served as an important moment in the study of hurricanes, particularly early ones. Data collected from this storm was researched thoroughly by an amateur meteorologist, who used his work to publish an article in the Journal of Science that would lay the foundation for our understanding of these storms. The most important lesson learned from this storm though is the fact that despite how rare it can be, hurricanes can happen here.

http://www.hurricaneville.com/1821_hurricane.htm
We need to keep this on the Skeptic Down low

I think I can name some cat 5s that were farther north, or at least just as far north as Earl is now.
Within the last 20 years of course.
Not blaming them on anything either.

Canadian forecast at http://www.weatheroffice.gc.ca/hurricane/statements_e.html
Section “5. Technical discussion for meteorologists” is interesting for weather-geeks. Since the statements get updated every so often, there’s no point copy-pasting a lo-o-o-ong discussion. Go to the link for the latest available update.

A tip to the west and we are looking at another Hugo here in Charlotte. 100 mile an hour winds. The city looked like it had been bombed. One of our oldest golf courses, the one where the Womens’ US Amateur was played a couple of weeks ago, lost 600 mature trees. No power for two weeks.

Here is an interesting discussion and way to analyze hurricanes that you don’t hear much about, but should.
This measurement accurately predicted when Ike, a Cat 2 on the Saffir-Simpson scale, would cause catastrophic and Cat 4+ storm surge damage on the Bolivar Peninsula in Texas in 2008.
The IKE as it is called, by the way, is an acronym, and has nothing to do with the name of the storm.
From Dr. Jeff Master’s I give you this quote:
Earl is a large hurricane, which gives it a higher potential for storm surge damage than a smaller hurricane with the same top winds. One measure of a storm’s power, useful for gauging storm surge threat, is to measure the speed of the winds and multiply by the area over which those winds blow. This total is called the Integrated Kinetic Energy (IKE). Based on the storm’s IKE, one can come up with a scale from 0 – 6 rating the storm’s destructive power from its storm surge. A separate rating can be given to the destructive potential of the storm’s winds. The IKE value of 112 Terrajoules for Earl, at 3:30pm EDT today, gives its storm surge a destructive power of 5.0 on a scale of 0 – 6. Earl’s winds have a lower destructive power, 3.4 on a scale of 0 – 6. Let’s hope the right front quadrant of Earl, where the main storm surge would occur, stays offshore! For comparison, the small Category 5 Hurricane Camille of 1969 had an IKE of 80 Terrajoules, and the very large Category 2 Hurricane Ike of 2008 had an IKE of 116 Terrajoules–similar to Category 3 Earl’s. –Dr. Jeff Masters
Chris
Norfolk, VA, USA