Sea ice is finally starting to form along the western shore of Hudson Bay, lagging well behind ice formation in the rest of the Arctic. Oddly, however, last year it was just the opposite: some WH bears were able to start hunting as early as 31 October (see photo below) while ice formation lagged behind in the Chukchi and Barents Seas.

Newly formed shorefast ice (see below at 24 November 2021) rapidly becomes ridged and buckled enough to hold the weight of a polar bear because of the compressing action of wind, tides, and waves. This means Western and Southern Hudson Bay polar bears should be back to hunting seals within the next few days (unless a south wind blows the wind offshore, which sometimes happens at this early stage):

There was so little ice on the west shore of Hudson Bay yesterday it is barely visible on the NSIDC global chart yet there was abundant ice in the Chukchi and Bering Seas and east of Svalbard in the Barents Sea:

Last year was quite a different story: a lot of ice in Hudson Bay but little in the Barents and Chukchi Seas:

Despite the slow start, it’s looking like 2021 will not be as late a freeze-up for Western Hudson Bay polar bears as it was in 2016, which as far as we know had no negative effect on polar bear survival.

10
Bryan A
Reply to  Joao Martins

It is interesting that there is so much ice off Siberia.

Yes. When Hudson’s Bay does finally freeze, this should be a high ice year.

Hi Tom, this might not get you a PhD, but will expand your scientific horizon:
When magnetic field goes down temperature goes up and vice versa.
I leave it to you to study this graph seriously
(Note of caution: keep it just between two of us, this is not for wider public consumption) 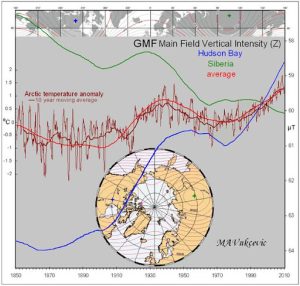 Here is a conceptual summary of the physical mechanism that explains why there would be cooling (in the region where the geomagnetic field strength has reduced and the start of the phenomena which suddenly appear off the West coast of America… ‘Atmospheric Rivers’…. if there is a reduction in geomagnetic field strength. Attached below is a link to Tinsley’s review paper that explains how GCR changes, change the amount of cloud cover in a region and the type of storms that appear in the fall and winter in a region.

Tinsley review paper is not a ‘theory’. The paleo guys have measured the changes in isotopes that have occurred in the past (kind of proves theory as there is no alternative explanation for cyclic warming and abrupt cooling) and the isotope changes correlate in time, with the past sudden abrupt cooling periods in the paleo temperatures.

Ions in the atmosphere and current movement in the atmosphere increase the formation of clouds and the formation of rain drops, by a large factor. Sudden increases in GCR in high latitude regions creates the condition for ‘atmospheric rivers’ to form. Super high amounts of rainfall and snowfall in the mountains is the physical conditions that is required to create growing and new, mountain glaciers.

A reduction in the strength of the geomagnetic field in a location causes there to be an increase in the amount of ions that produce by GCR and hence more cloud cover, more rain, and more intense cyclone storms.

….. the timescale of multidecadal minima of solar activity, …… the Maunder minimum (1645–1715) and …… large increases in the high latitude ﬂuxes of GCR as represented by 10 Be and 14 C concentrations have been reported in polar ice and other natural archives.

For the Maunder minimum, the ﬂux of lower energy GCR in polar regions that produces 10 Be increased by about 100% relative to present values (McCracken et al., 2004). This is several times larger than the solar cycle variation.”

The Bear is an incredibly adaptive animal . It will have no problems with ice being a couple of weeks later. They are omnivores and will find food when it is needed

5
Bryan A
Reply to  Doug Danhoff

Maybe the currents changed a bit and warmer water flowed into Hudson Bay.

I think it had more to do with the cold water in the Gulf of Alaska (which had been warmer than normal in the recent past) setting up the Polar Jet path around the edge of the Polar Vortex. When the intense cold in Alaska decides to go somewhere, it will definitely make an impact. It will either slide south over BC, Washington State and points south or SSE into the northern Rockies, then probably into TX or the US SE.

The good news, Spring in the NH is only 4 months away and here where I live, more like 3 months. 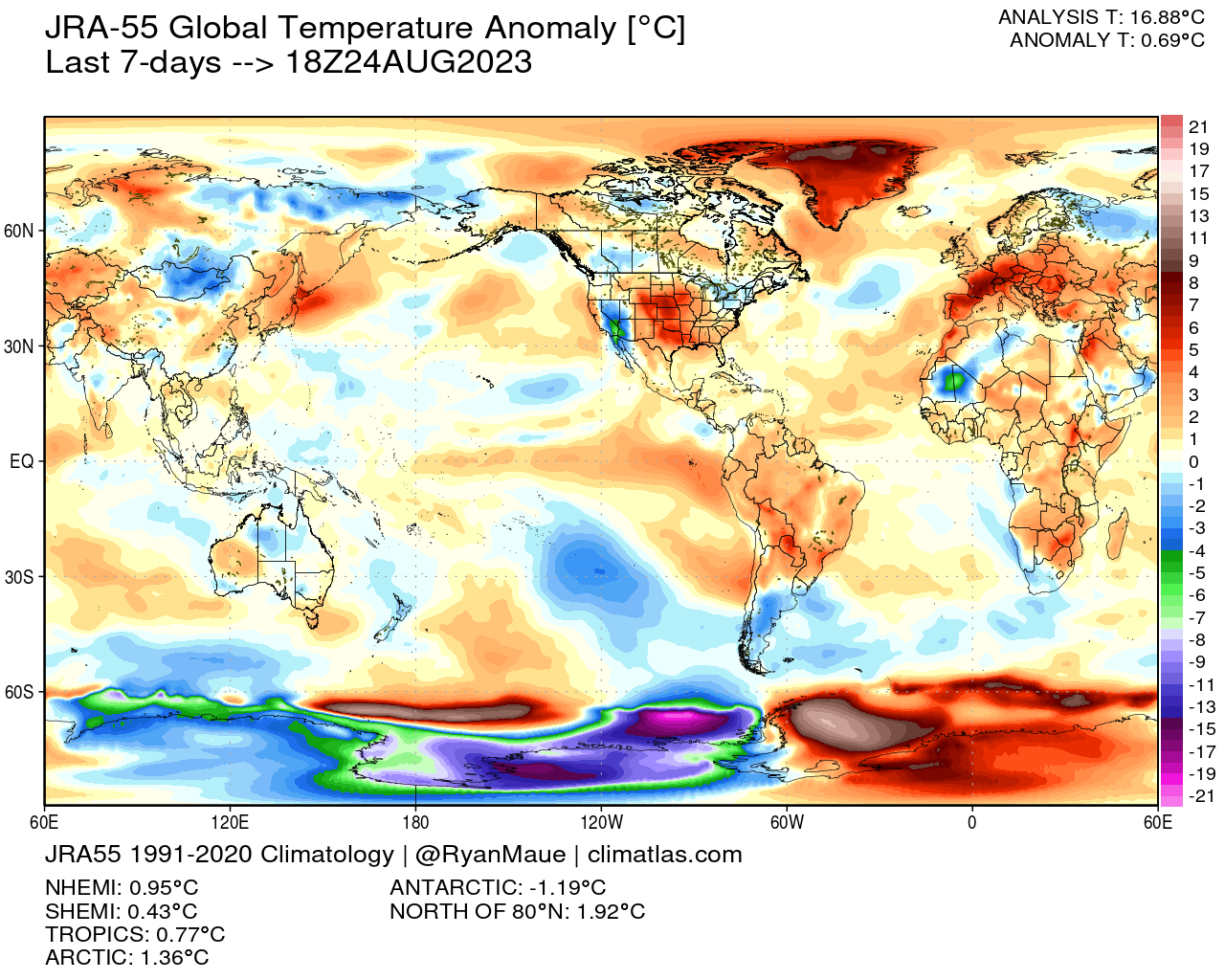 Plus, at this time of the year open waters not covered with ice at these latitudes are leaking heat to space like hydrogen from a punctured zeppelin.

It looks like the pack ice may touch Iceland this winter for the first time in years.

It’s almost as if averages are compiled from the sum of variable occurrences.

So, it looks like weather is complex and variable, but climate is known for certainty 30 years ahead of time? I need a drink.

Careful, I can see the next headlines, “Climate Change causes increase in alcohol consumption!!!” Fact!!! In all seriousness, I fully understand where you are coming from, I am of an age where I regularly read, see, or hear something that makes me despair, but whatever it is, it’s all my fault & the fault of everyone else of my generation, you know, the ones who can think for ourselves & arrive at a common sense (woefully lacking in today’s world) conclusion!!! 😉

Things in the UK aren’t normal. We had wind drought, and I hear there is a river of wind to drown the place.
This unprecedented climate change from one week to the next is testing patients of our friend Griffo. I hope he doesn’t do anything stupid in trying to stop this climatic cataclysm.

Another important area for Polar bears is around Svalbard/Spitzbergen, and over there the ice is growing very quickly this year. 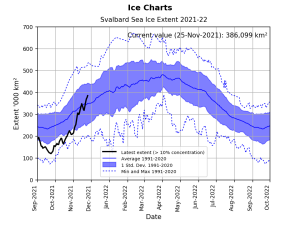 Now for really sad story.
“Emma Smart, 44, an insulate Britain eco-zealot sentenced to four months for M25 protest who is on hunger strike in prison is ‘sounding sad’ and ‘tearful’ on phone and is complaining that she has still not had any of her belongings delivered to her cell.”
To be fair they did try to deliver to her some super glue and wall cavity insulating foam but vehicle was stuck in traffic jam on M25 behind an ambulance taking pregnant lady to the nearby hospital. Traffic hold up was caused by some idiots gluing themselves to the tarmac. Sorry, Emma, they will try better next time.

10
Alan the Brit
Reply to  Vuk

Any news as to whether the cell is padded???

In three days, an ozone patch from over Alaska will extend over Canada and cause a sharp drop in temperatures over Hudson Bay. 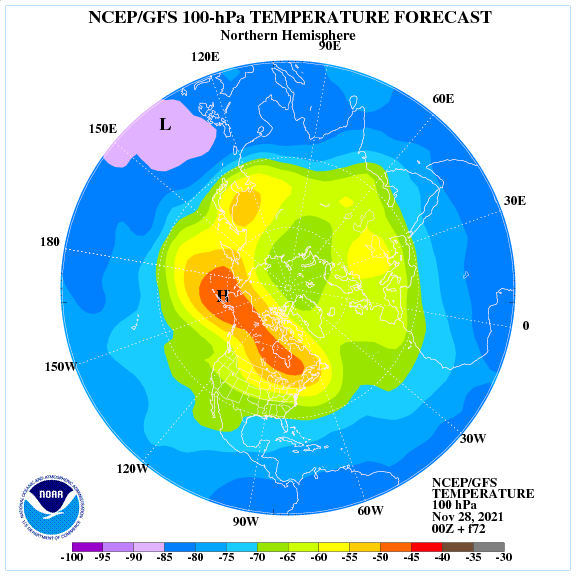