In 2013, the U.S. government lifted export restrictions on minimally processed ultra-light oil. In the summer of 2015, the United States and Mexico entered into an oil exchange agreement, and the restrictions on oil exports were fully lifted in December 2015. U.S. crude oil exports have increased significantly since 2015 and have averaged around 3.00 million b/d every year since 2019.

U.S. crude oil infrastructure has expanded significantly since 2015 to facilitate crude oil exports from onshore production. Ports on the Texas Gulf Coast, particularly Corpus Christi and Houston, have led the expansion, allowing more oil to be exported from the Permian Basin and Eagle Ford Basin. Due to the Gulf Coast’s many pipeline connections and efficient port infrastructure, most U.S. crude oil exports leave the United States from the Gulf Coast region.

The headline should have been:

During the July 31, 2019 Democratic debate, when asked if there would be “any place for fossil fuels, including coal and fracking, in a Biden administration,” Biden said, “No, we would, we would work it out.”

“We would make sure it’s eliminated and no more subsidies for either one of those, either—any fossil fuel,” Biden said.

How about banning drilling on federal lands & waters? How’s that going Joe?

“No more drilling on federal lands. No more drilling, including offshore. No ability for the oil industry to continue to drill, period, ends, number one.”

EIA forecasts U.S. crude oil production in the U.S. Federal Gulf of Mexico (GOM) to increase in the next two years, according to the latest Short-Term Energy Outlook (STEO). By the end of 2022, 13 new projects could account for about 12% of total GOM crude oil production, or about 200,000 barrels per day (b/d).

Now Biden and Merkel have agreed Nort2 pipeline deal lack of adequate Russian gas supplies this coming winter, the number of German flood dead victims may pale into insignificance to what might be in store if there is another harsh and prolong cold spell in the Northern Europe.

Are you kidding me?

The last time I looked, Gazprom had a reserve life well in excess of 50 years.

‘Inadequate supplies’ due to Putin’s response on Biden’s sanctions related to the N2 pipeline. He would love to break up Germany-USA love in even at cost of few rubles considering the current high gas prices in the EU.

It looks that the last summer the EU gas spot was about $2-$3, while currently according to your graph is about $12, Putin & Gazprom are laughing all the way to the Госбанк (they call it something else now).

Meteorological bodies have referred to the rainstorm in China – which saw a year’s worth of rainfall in three days – as a one-in-1,000-year weather event. The rainfall broke hourly and daily records of the 70 years of collected data.

The heavy rainfall in the south of North Rhine-Westphalia and north of Rhineland-Palatinate in Germany produced accumulations which averaged 100 to 150 mm (3.9 to 5.9 in) in 24 hours, equivalent to more than a month’s worth of rain. In Reifferscheid, 207 mm (8.1 in) fell within a nine-hour period while Cologne observed 154 mm (6.1 in) in 24 hours. Some of the affected regions may not have seen rainfall of this magnitude in the last 1,000 years.

The searing heat that scorched western Canada and the US at the end of June was “virtually impossible” without climate change, say scientists. In their study, the team of researchers says that the deadly heatwave was a one-in-a-1,000-year event.

And we have 3 other US heatwaves, on in E Europe and Russia, a temperature record heatwave in Lapland, in N finland, record breaking temperatures in Siberia for second year running.

So many extreme weather events, many in northern areas, four 1,000 year events in last 8 weeks – AND STILL THERE’S NO CLIMATE CHANGE IMPACT YOU SAY?

Hi Griffo
You forgot to mention the UK’s first ever orange warm weather alert, we had ‘unprecedented’ 3-4 days of 30-31C (~ 88F) in the SE & SW. TV and papers are full of photos of people so distressed by this onslaught of the global warming that they in the huge numbers, despite all the restrictions, run out in order to soak some sunshine and top up on the vitamin D. BTW, did you join the crowds on any of the nearby beaches?
The other day a 9 year old climate change expert (apparently known as the British Greta) was screaming her head off at the TV presenter for saying that “this ‘nice’ weather may persist for few more days”.

Pay no attention to the historical record. It never flooded in China before. Not withstanding the 1931 floods from which tens of millions perished, or the hundreds of other floods that are well documented. http://www.cmnt.lv/upload-files/ns_39art120%20(1).pdf

Hell, it never rained before.

Griff seems to believe that a 1 in 1000 event should only happen once in 1000 years, and only once over the entire planet.

9
Chuck no longer in Houston
Reply to  Scissor

So what was the reason for that massive dam?

Griff, get hold of yourself. Maybe talk to your doctor about upping your meds.

The two worst floods of Passau, Bavaria, as far as we know, were in 1501 and 1595.
This is the future we expect if we spend trillions to reduce CO2 to “safe levels”? If we all drive electric vehicles will we be able to create a world as safe as 1501? 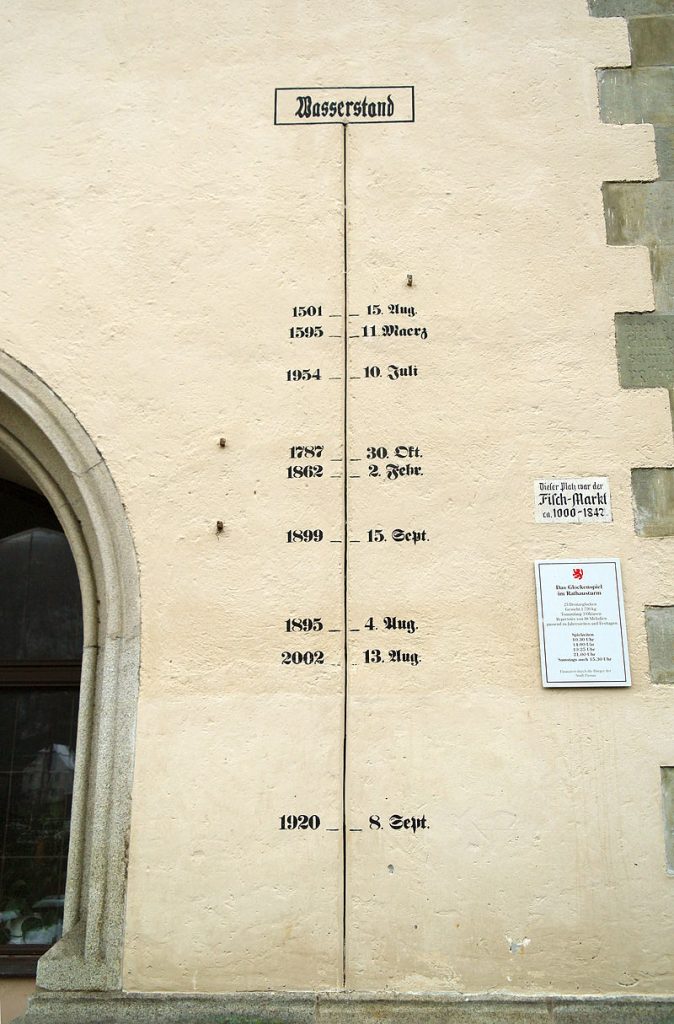 Flood level markers at the tower of the Town hall of Passau, Bavaria

Impressive. I imagine that many buildings were lost in the 1501 flood.

Hey, ya big griffter!
Why don’t you get your little buddies get together, or maybe ask your pay and thought masters obsequiously; and figure out a good explanation for where the Pleistocene Ice Age got to! Did it disappear into the ether like an inconvenient fact trying to enter your brain pan?

The data show that we have been in a steadily COOLING interglacial period for the last 12,000 years or so! If you don’t mind me saying so; only an idiot would call for the cessation of fossil fuel use, and the crippling of our energy infrastructure and supply by adding mostly useless and expensive Unreliable Energy; when we are looking at the resumption of glaciation in the near future! Until you can provide some scientific evidence that we are out of the ice age cycle of the last 4 1/2 million years, I say, “Drill, baby, drill!”

What do you have against the Modern Climate Optimum, and the health, wealth and prosperity that it brings? Are you a Communist, or just raaaaacist?

So when are you moving to Antarctica Griff? I mean nearly every day some where on this earth there is bad weather. It obviously can’t go on like this or we’re all gonna die! Your only hope is to become a climate refugee and run to the S pole before you burn up or drown! So get to packing!

Sh1t happens. None of it related to “emissions”.

Griffter….your unjustified and careless use of all caps may and could add to climate change….your adherence to the Rule is noted – EVERYTHING CAN BE ATTRIBUTED TO CLIMATE CHANGE.

Since all of these events have happened before, there is nothing unusual about them happening again. Just because some activist claims an event is a 1 in 1000, doesn’t make it so.
Learn a little statistics griff, and you won’t come off as a total fool quite so often.

PS: It’s a big world, there are thousands of 1 in 1000 events happening every single year.

But weren’t all these weather anomalies predicted by our magical climate models? Why is everyone acting so surprised? /sarc

Peak oil is a social construct.

More of a socialist construct as it is most commonly used. When most people outside the oil & gas industry babble about Peak Oil, it’s usually to justify some sort of Enviromarxist nonsense.

Just be thankful you don’t have someone like Doris Johnson in, er, charge….

Considering all the stormy political terrain…

The oil is flowing, returns on capital are being made & investments in the industry are ongoing…

The oil industry is resilient.

Joe’s bite (thank goodness) is less than his bark.

But the best way to go is open-throated “drill baby, drill.”

The cool thing about Texas exporting oil from the Ports of Houston or Corpus Christie is there is little Joe and Democrat terrorists can do about it. They can’t slap a tax on it leaving (exports).

The Export Clause, found in Article I, Section 9, Clause 5 of the U.S. Constitution, directly states “No Tax or Duty shall be laid on Articles exported from any State.” The Clause represents one of the few restrictions on Congress’s otherwise broad taxing power.