On February 12, 2021, a little more than a year from its launch, the European Space Agency and NASA’s Solar Orbiter caught sight of this coronal mass ejection, or CME. This view is from the mission’s SoloHI instrument — short for Solar Orbiter Heliospheric Imager — which watches the solar wind, dust, and cosmic rays that fill the space between the Sun and the planets.

It’s a brief, grainy view: Solar Orbiter’s remote sensing won’t enter full science mode until November. SoloHI used one of its four detectors at less than 15% of its normal cadence to reduce the amount of data acquired. Still, a keen eye can spot the sudden blast of particles, the CME, escaping the Sun, which is off camera to the upper right. The CME starts about halfway through the video as a bright burst – the dense leading edge of the CME – and drifts off screen to the left.

The first coronal mass ejection, or CME, observed by the Solar Orbiter Heliospheric Imager (SoloHI) appears as a sudden gust of white (the dense front from the CME) that expands into the solar wind. This video uses difference images, created by subtracting the pixels of the previous image from the current image to highlight changes. The missing spot in the image on the far right is an overexposed area where light from the spacecraft solar array is reflected into SoloHI’s view. The little black and white boxes that blip into view are telemetry blocks – an artifact from compressing the image and sending it back down to Earth.Credits: ESA & NASA/Solar Orbiter/SoloHI team/NRL

For SoloHI, catching this CME was a happy accident. At the time the eruption reached the spacecraft, Solar Orbiter had just passed behind the Sun from Earth’s perspective and was coming back around the other side. When the mission was being planned, the team wasn’t expecting to be able to record any data during that time.

“But since we planned this out, the ground stations and the technology have been upgraded,” said Robin Colaninno, principal investigator for SoloHI at the US Naval Research Laboratory in Washington, D.C. “So we actually got more downlink time for the mission than what was originally scheduled.” So SoloHI winked on – and caught its first CME.

NASA’s STEREO-A spacecraft, short for Solar Terrestrial Relations Observatory, also caught a glimpse from its COR2 detector, which blocks out the Sun’s bright disk to see otherwise faint phenomena in the solar wind.

Back on Earth, NASA’s Moon to Mars Space Weather Analysis Office modeled the CME to trace its trajectory through the solar system. The positions of Solar Orbiter, marked with a red diamond, and STEREO-A, a red square, reveal their different vantage points.

The modeled path of the CME observed by SoloHI on February 12, 2021. The plot on the far left shows the Sun as a white circle in the center, and the inner planets and some spacecraft appear in their positions in orbit. The center and right panels show different angles of the same model, focusing on Earth.Credits: NASA’s Goddard Space Flight Center/M2M/CCMC

NASA spacecraft have been watching CMEs for decades, but Solar Orbiter is still a game-changer. “We’ve realized in the last 25 years that there’s a lot that happens to a CME between the surface of the Sun and Earth,” said Colaninno. “So we’re hoping to get much better resolution images of all of these outflows by being closer to the Sun.”

Solar Orbiter has already taken the closest picture of the Sun to date, and it will only get closer. Solar Orbiter’s official mission begins in November, when SoloHI and the rest of the remote-sensing instruments will be switched on in full science mode. Stay tuned!

SIDC detected an earth directed CME in the 13th. Should arrive today.

And yet southern Britain is still cold.

The graph below shows us the number of C, M and X-class solar flares that occur for any given year. It gives us a nice idea of the amount of solar flares in relation to the sunspot number. It is thus another way of seeing how a solar cycle evolved over time. This data comes from the NOAA SWPC and is updated daily. 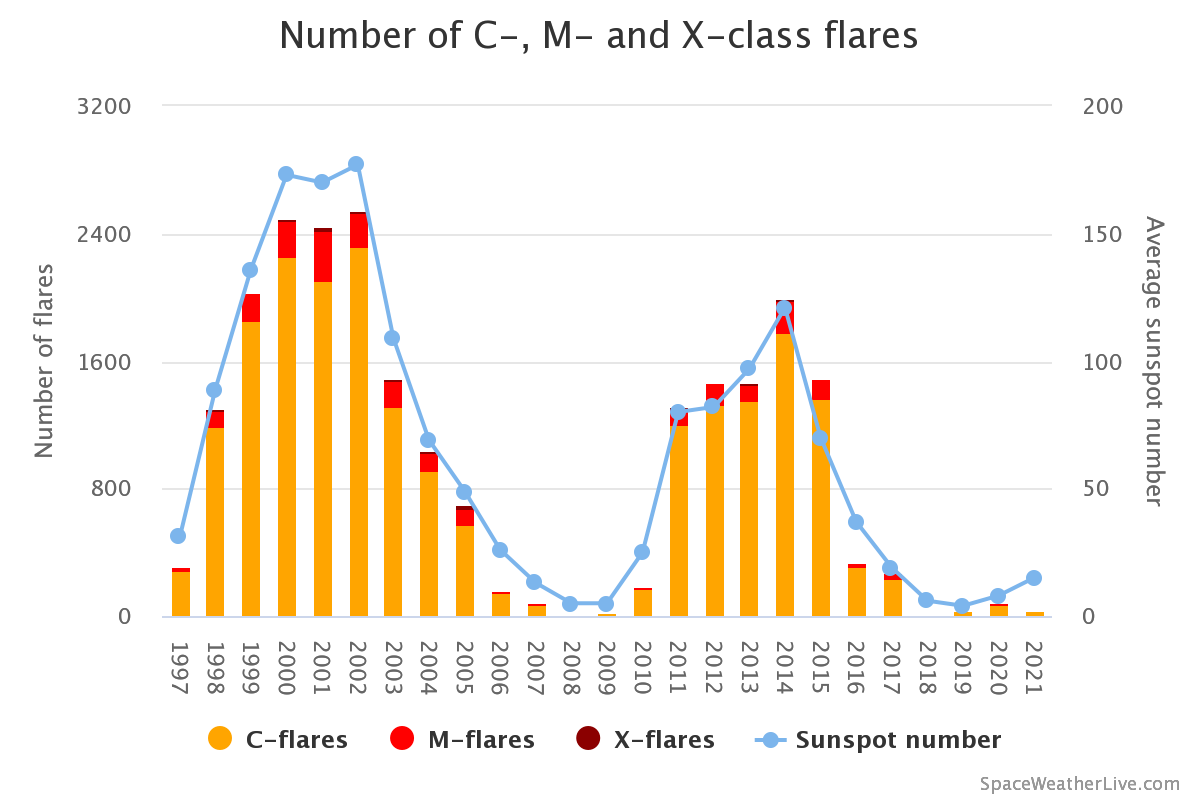