When a block of ice the size of Houston, Texas, broke off from East Antarctica’s Amery Ice Shelf in 2019, scientists had anticipated the calving event, but not exactly where it would happen. Now, satellite data can help scientists measure the depth and shape of ice shelf fractures to better predict when and where calving events will occur, according to researchers.

Ice shelves make up nearly 75% of Antarctica’s coastline and buttress — or hold back — the larger glaciers on land, said Shujie Wang, assistant professor of geography at Penn State. If the ice shelves were to collapse and Antarctica’s glaciers fell or melted into the ocean, sea levels would rise by up to 200 feet.

“When we try to predict the future contribution of Antarctica to sea-level rise, the biggest uncertainty is ice shelf stability,” said Wang, who also holds an appointment in the Earth and Environmental Systems Institute. “There’s no easy way to map the depth of fractures in the field over a regional scale. We found that satellite data can capture the depth and surface morphology of ice shelf fractures and thereby allow us to consistently monitor this information over a large range.”

Wang and her colleagues examined high-resolution data collected by the Ice, Cloud and Land Elevation Satellite (ICESat-2) over the Amery Ice Shelf, which is about the size of West Virginia, between October 2018 and November 2019. The satellite shoots green laser pulses to the land surface and uses reflected photons to determine surface height. Whereas other satellites have a resolution of several thousands of feet, ICESat-2 has a resolution of approximately 56 feet, enabling it to see smaller fractures and the fracture morphology.

The researchers then ran the ICESat-2 data through an algorithm that identifies surface depression features to locate and characterize fractures in the ice. They reported their results in the journal Remote Sensing of Environment.

The researchers identified three types of fractures — U-shaped, parabolic-shaped and V-shaped fractures — up to 164 feet deep in the ice shelf. They also realized that this surface information provides insights into what is happening hundreds of feet below the surface of the ice.

Basal fracture morphology — the shape and size of fractures at the base of the ice shelf — is proportional to the surface depressions, according to Wang. As the glacier that the ice sheet is buttressing accumulates more snow and ice, the parabolic-shaped fractures flow toward the edges of the ice shelf. Once they cross a certain boundary, those surface fractures have a greater potential to penetrate deeper into the ice as the basal fractures extend upward. These fractures can then become V-shaped, potentially signaling that a rift — a fracture that penetrates the entire thickness of the ice sheet — has formed. These rifts are more likely to cause calving events.

“Incorporating satellite-based vertical information can improve future ice shelf models,” Wang said. “It can help us actually predict calving fronts and where an ice shelf is vulnerable to these events.”

The National Science Foundation and NASA supported this study.

Surely an ice shelf is floating, and can’t contribute in any way to sea level rise?

OK, they state that they ‘hold back’ the glaciers on land but what do they expect to occur? Ice flows. If the ice shelves never broke off, the ice would eventually reach up as high as snow forms. Since it doesn’t, obviously this is a continuous process, and you can’t expect it to stop if you are sane.

It breaks off because the ice is growing

No. It breaks off because gravity is pushing the ice behind it. It could stop snowing and gravity would still push it.

Nah there is resistance and force is required to extrude the ice from the bottom. If the ice shelfs weren’t there, they would still stop, the resistance of the ice shelfs are minimal to the stability of the ice sheet. The dynamic is the weight on the top pushes ice out the sides. It’s what the ice sheets have been a feature of Antartica for 30 million years. It’s was way warmer before and in no way is threatened in any reasonable time frame.

A glacier is literally a “river of ice”, of course it has to calve occasionally.

A glaciologist observed that ice shelves are like long fingernails, at some point after getting so long they break off.

A feminist glaciologist observed that nail polish would impede calving.

How “genderist” of you.

…. and certainly a lot of the other genders do.

The only way they can affect sea level rise is if/when the grounding line shifts.

Ice shelves make up nearly 75% of Antarctica’s coastline and buttress — or hold back — the larger glaciers on land, said Shujie Wang, assistant professor of geography at Penn State. If the ice shelves were to collapse and Antarctica’s glaciers fell or melted into the ocean, sea levels would rise by up to 200 feet.

Penn State or the State Pen? Is this institution reliable?

The ice shelves are “holding back” the glaciers? No they AREN’T. The floating ice is NOT damming anything, Jack.

If all of Antarctica’s glaciers melted… That’s NOT going to happen. They’ve been there for what, 36 million years? Stop freaking out, weirdos, you’re scaring the children.

Alarmism is getting really boring, Penn pals. It’s so jejune and sophomoric. Please find another hobby.

PS — How big is Houston? Is that some kind of metric?

On the other hand, if the glaciers on land were to grow, sea levels would fall by up to 200 feet. Which”if” to believe (or anything in between, nobody knows – we need more models)?

I’ve got a load of Plasticine you can have !

In the meantime, it appears Antarctic sea ice formation is off to a good start this season. I assume ice sheet fractures need open water to float away. 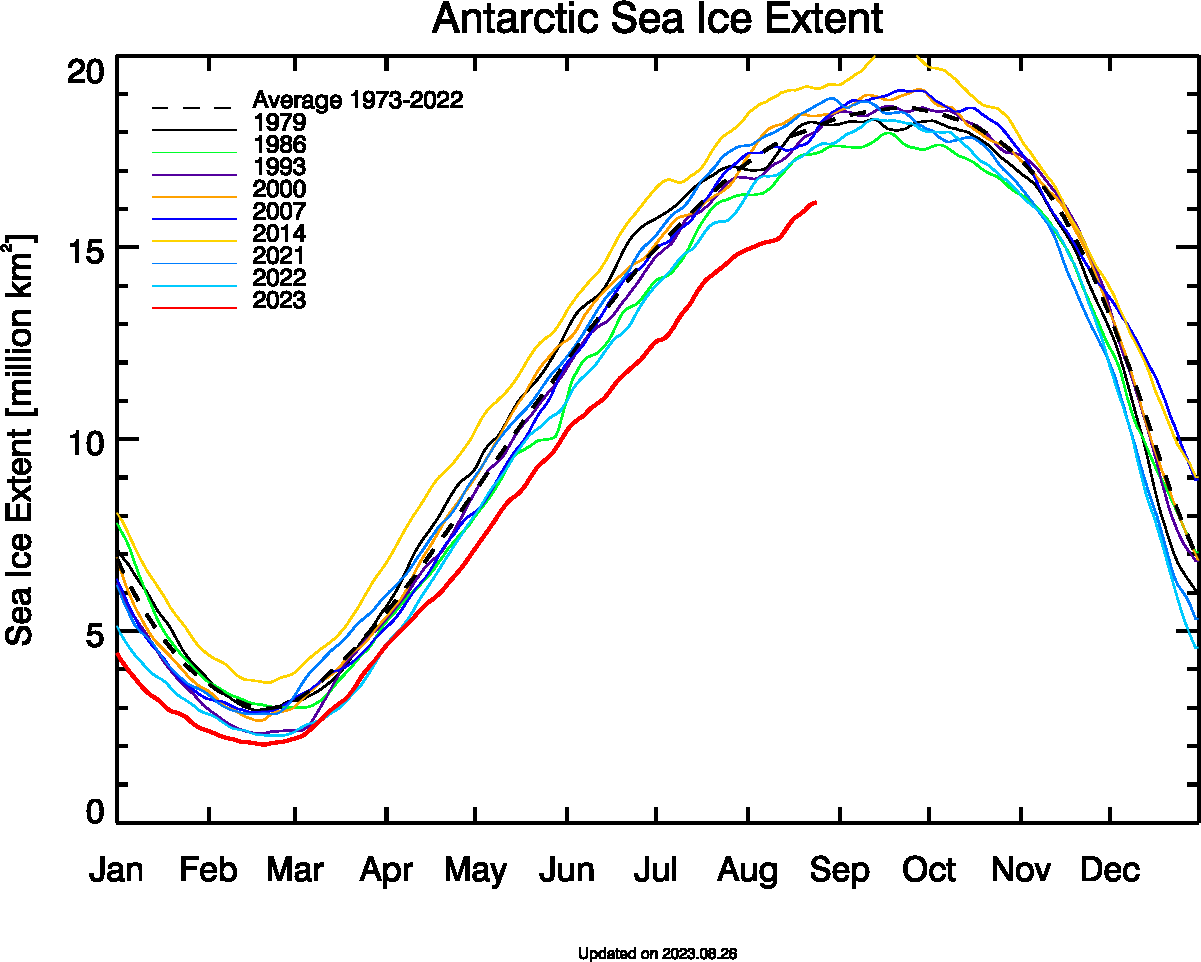 ”a good start”
Good? If you like cold weather maybe.. Me, I like the heat. Thinking of moving north (tropic bound)

If, if if.
If the Antarctic ice shelf eventually reached the equator without calving and then progressed northwards as far as the Arctic – it would eventually solve the warming (ice free) Arctic problem.
Is this not good news??

I spotted the problem when they said “associate professor of geography“. They are conflating grounded ice sheet below sea level with ice shelf, which float, giving them their name.

What is the point of any of this?

Sea level will do what it wants, the planet doesn’t care.

What’s the point? The wealth redistribution industry, the biggest Ponzi scheme ever devised on Earth, and the primary source of income for the ruling class.

Quote: “”Ice shelves make up nearly 75% of Antarctica’s coastline and buttress — or hold back — the larger glaciers on land””

How can anybody believe that, let alone say it in the first place?

What has gone wrong here

Yeah glaciers retreat when they melt and I guess per these morons they also advance when they melt or maybe it’s just a northern/Southern Hemisphere differance?

The only metrics of value are Wales and the Olympic Swimming Pool. When I tell my mates that minimum Arctic ice in September is sixteen times the area of the British isles they are amazed/bored.

From my reading, in particular geology Prof. Ian Plimer’s Heaven And Earth, Global Warming: The Missing Science, Ice shelf calving is a sign of glacier growth.
As the glacier grows it pushes, via gravity, the farthest ice further out to sea where it will eventually calve.

As for the dreadful word “IF”, I’m always reminded of my Dad’s opinion: “If, the most useless word in the English language: if my aunt had b*lls, she’d be my uncle”.

Yes I agree; but a Woke would probably not; for it would depend on my aunt’s/Uncle’s declaration of their emotional state.

Balls,said the Queen, if I had two I’d be King!

Maybe she does or maybe she just identifies as your uncle.

Is Houston another new official NBS unit of measure? Or just another science illiterate journalism goober?

Every year the SEA ICE swings from around 3E6 km^2 during summer to 14E6 km^2 (doubling in size) during winter. (technology)

i thought math, that you used, is racist. I was also told there were no correct answers.

Griff, Loydo do I have that right?

Do you have that right? An expectation of the right answer is white supremacist!

Wow! It is great to see WATTS followers beat about the head and shoulders the Penn State idiots that talk about floating ice melting and raising sea level and the equally ignorant idea that floating ice shelves hold back glacier movement. Another problem is the 56 feet resolution of the ICESat-2. Depending on the reflectance spectra difference it would take an ice fracture fairly wide (maybe one-third the resolution?) to register in the imagery. Since glaciers are fractured already, think crevasse, they need to identify the fracture where the calving will occur, not likely.

Maybe they sharpen the features in Photoshop.

You have to love this one from ” your ABC ” here in Aus. Actually a nice article and clever presentation.
https://www.abc.net.au/news/2021-03-05/satellites-capture-birth-of-brunt-ice-shelf-antarctic-iceberg/13208776?nw=0

That is until you get about 2/3 of the way through and the ABC jerk states
” The impact of climate change is being felt in the Antarctic. Parts of the continent are among the fastest warming on the planet and the rate at which some glaciers in west Antarctica have been disintegrating is a cause of concern for scientists.”

Which is directly followed by
“But both Dr Cook and Dr Marsh stressed this calving event was part of the natural life cycle of the ice shelf and not the result of climate change.”

What do you say
FFS

I know how laser beams can be! How can they prove the laser beams aren’t the cause? I mean, we didn’t know there was a problem until we had the equipment to look for the problem. Therefore, it is the equipment causing the problem. If they stop looking, they won’t get their grants either…
/sarc, sorry, didn’t lay it on thick enough.

So NK and Iran only need one nuke to hold the world hostage.

Does anyone have a date on the age of the ice at the furthest and lowest point of the glacier(s) as they make contact with the ocean?