The Earth Energy Imbalance (EEI) is a key issue for estimating climate sensitivity.

If EEI is positive then the Earth’s climate system gains energy; if it’s negative the system loses energy, largely due to the energy flow into or out of the oceans.

A recent paper, Dewitte et al (2019), henceforth D19, derives changes in the EEI during the period 2000-2018, using data from the satellite CERES mission.

They shift the CERES values so that their average matches an EEI estimate from another study that is based on in-situ ocean heat content (OHC) data from ARGO buoys, and drift-correct them.

“At first sight it seems surprising that the EEI is decreasing during a period of continued greenhouse gas emission.” 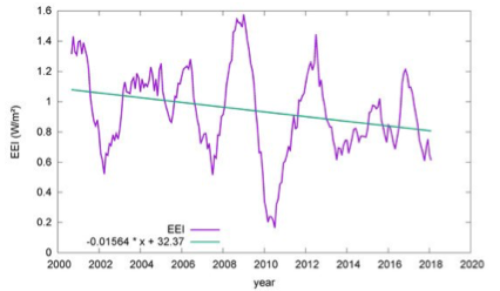 It is indeed surprising that the EEI not climbed during the last 19 years when taking into account the ongoing increase of forcing, arising mainly from rising greenhouse gas levels.

In D19 the authors considered the plausibility of this outcome. They bolster the result with inspection of OHC data, calculating the time derivative dOHC/dt (which represent ~93% of the EEI) and the trend in it.

It’s not the only paper which estimates a near zero EEI trend in the 21st century. Also a review paper ( Meyssignac et al (2019)) comes to this outcome, see their Fig. 12 for 2006…2016. For a further check I calculated the derivative dOHC/dt for two year intervals, which are a measure of the EEI ( not the absolute OHC, see this report, section 2b) from three observational OHC products ( Domingues/Levitus; Ishii; Cheng) from this source.

The fourth cited dataset, Resplandy et al (2018), I skipped due to the retraction of the related paper, the mindful reader will remember.

The development of the EEI deduced from Cheng, this dataset was also used in L/C 18:

Fig.2: The dOHC/dt development with a 15 years Loess smooth

The result gives a very similar picture, indicating a near zero (or even a slightly falling) trend during 1999….2018 for the EEI.

What does this mean for the climate sensitivity?

Equilibrium/effective climate sensitivity (ECS) can be estimated as the (scaled) slope of the relationship between observed Global Mean Surface Temperature (GMST) and the excess of effective radiative forcing (ERF) over EEI, provided that the influence of natural climate system internal variability is small enough over the analysis period.

When there is an EEI standstill over a given period, then during this time the slope of the relationship between the observed GMST and the ERF reflects the climate sensitivity in equilibrium.

The observed time span is very short for this purpose, only 20 years. This limits the toolbox available for doing calculations. In Lewis/Curry (2018) (LC18) the authors take changes between base and -final periods for both ERF and GMST data, see their section 4.

This avoids some pitfalls from the dilution problem of regression approaches which biases the slope estimations low. However, that method is only suitable with long enough time windows. Therefore I apply the regression method, including all annual data, in this case not using OLS (for Ordinary Least Square) regression but Deming regression. This method takes into account the uncertainties in variables from both datasets used, ERF and GMST, and should avoid the regression dilution problem.

The short time window will make optimizing the S/N ratio very crucial due to the fluctuating non-anthropogenic influences. Therefore I tried to reduce the “climate noise” in the GMST dataset- HadSST4 based Cowtan and Way (C&W) in this case.

I adjusted it for ENSO, solar and volcano influences, very similarly as was shown here.  The “filter” was developed by Grant Foster aka “tamino”, released here.

Fig.3: Deming Regression of the ERF on filtered GMST for 1999…2018 when the EEI was in a temporary standstill. All estimated natural forcing and ENSO variability was filtered out in the GMST, therefore the total anthropogenic ERF is used.

The R² of the calculated trend is 0.88, which is a remarkably high value, when one takes the short time span involved into account.

The derived ECS best estimate (based on an ERF of 3.8 W/m² when doubling the CO2 content of the atmosphere) is:

I calculated the climate sensitivity in a temporary standstill period (or slightly decreasing) as it was detected in the observations of the EEI during 1999 to 2018. The  ECS value of 1.72K as the best estimate is in excellent agreement with the value found in LC18, 1.66K using the then current C&W GMST dataset (see Tab.3 of this paper).

The published ECS-values of the CMIP6 models have  a mean above 4 K (see this recent paper) that is higher by a factor of 2.4 than observed here.  This growing discrepancy between observed values of ECS reduces the credibility of the  high model estimates.