Climate scientists love to blame every bad weather event on global warming. Yet we never hear them cite climate change for the relative absence of bad weather!

One such example are tornadoes in the US, where we now have several decades of carefully collated data.

With the year near an end, we know that the number of tornadoes has been above average this year, though well below 2008 and 2011. Primarily this is due to several outbreaks in February and April:

Data since September is still provisional, so it is too soon to do a full analysis. But what we can safely say is that there have been no EF-5 tornadoes this year, the strongest category. This now extends the period without an EF-5 to six years, the last one being the Moore, Oklahoma tornado in May 2013.

It is also abundantly clear that powerful tornadoes were much more common in the 1970s.

The small numbers of EF-5 make estimation of trends difficult, but such trends are clearer with EF-4s. Provisionally there have been three this year, a figure now unlikely to change:

This is a continuation of low numbers in recent years, in stark contrast to the 1970s:

None of this is rocket science. Meteorologists fully understand that tornadoes, and the thunderstorms from which they form, depend on the clash of warm and cold air. Typically the warm moist air comes from the Gulf, whilst the cold air arrives from Canada. (More info here.)

According to global warming theory, the poles should warm faster than the tropics, which means that the type of thunderstorms we are talking about here would tend to be less powerful. In turn tornadoes should be less frequent and weaker.

I look forward to the BBC/Guardian reporting this good news.

Clearly the Climate Emergency is so severe that even tornadoes can not survive it!!! Ahhhhhhhh!!!!!!!!! We are all going to die in a fiery flood!!!!!!

What a bunch of morons.

“One such example is tornadoes in the US”

Children aren’t going to know what an F-5 tornado is!

“…According to global warming theory, the poles should warm faster than the tropics, which means that the type of thunderstorms we are talking about here would tend to be less powerful. In turn tornadoes should be less frequent and weaker…”

This overlooks the “they know travel in packs” and “outbreaks are less frequent but more severe” claims.

The data above prove otherwise.

Check your grammar before you hit post. Don’t let the climate emergency, cough, lead you to rash actions.

Antarctica (as a whole) has slightly cooled during the past 40 years.

If you’re waiting for the Beeb to report good news you are in for a long wait.

A New Years tradition: Count your blessings…..
No EF-5 and few EF-4 tornadoes is a blessing we all can agree on!

We need to adjust the historic tornado data, stat.

However it is the TC season down under so be prepared for some dooming anytime folks-
https://www.msn.com/en-au/news/australia/tropical-cyclone-could-develop-off-wa/ar-BBYoqXt
to add to all the recent dooming-
http://www.bom.gov.au/cyclone/climatology/trends.shtml

I think the Greens are all still PO’d at the twister that lifted Dorothy’s house and landed on their sister.

The IPCCs AR4; Chapter Ten Executive Summary under Extremes says the warming will be at night, in winter and in the higher latitudes. The diurnal temperature differences will be less.

No link I’m out of town on an iPad

Hey, that is the explanation they are looking for. The big tornados are happening at night when it is super hot but no one can see them (except Greta of course) because it is dark!!
I am sure the Guardian BBC team are working on how bad it is at night when no one is about.

[ The 2018 Fourth National Climate Assessment has similar reservations about any links between climate change and tornadoes. It says:

“Observed and projected future increases in certain types of extreme weather, such as heavy rainfall and extreme heat, can be directly linked to a warmer world. Other types of extreme weather, such as tornadoes, hail, and thunderstorms, are also exhibiting changes that may be related to climate change, but scientific understanding is not yet detailed enough to confidently project the direction and magnitude of future change.”]

Waffles?
From a 2013 article in National Geographic:

“Global warming is causing more extreme weather. But when it comes to tornadoes, it could go either way.”

Shape what do you think they mean “extreme” weather?

This is what the IPCC says…..

“There is low confidence in projections of small-scale phenomena such as tornadoes because competing physical processes may affect future trends and because climate models do not simulate such phenomena. ”

“Competing physical processes” being for one, the fact that tornadoes derive their CAPE as much from the overlying cold airmass, as from the humidity within the underlying warm airmass.
We know that the Arctic is warming faster, and so it is not (except of course from the denizens here who only come to have their biases confirmed) a stretch to realise that that part of the trigger mechanism may well counter the other.

National Geographic! Hahahahaha, yea, they are SOOOOOO unbiased and reliable. 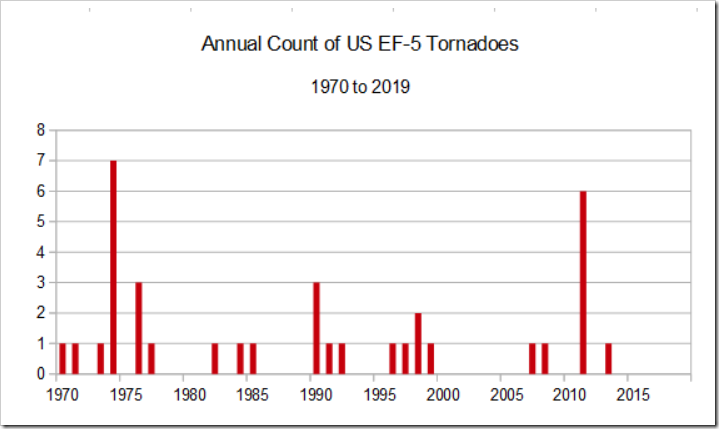 The common factor for tornadoes spiking is La Nina cooling.

Well, I posted two posts to this article yesterday and neither one of them has shown up.

That’s the first time that has ever happened.

I recall several years ago a swarm of tornadoes passed through Oklahoma a did a lot of damage. One community in particular was devastated. A “sustainability” person was practicing the requisite hand-wringing over the sure-to-come global catastrophe.

I did some research and found that the community in question is at a location where severe storms have historically been quite common. Why the “unprecedented” damage? Fifty years before, it was a sleepy ranching community with few people and houses but lots of cattle. Now it is a densely packed suburb of Oklahoma City.

When I helpfully pointed this out to the hand-wringer, I was met with a blank stare.

Sigh!!!! The science say Tornadoes are very much in the uncertainty basket and yet this article implies that the lack of a significant increase is proof the science is wrong. Huh?

No it didn’t rah.

See my post above.
Nah, rah, that would conflict with your cognitive dissonance of course.

Anthony:
The IPCC expressed uncertainty, but that is not what you hear in the media. Most refer to the “science” as Rah said. Of course those who do so are generally repeating and not checking what the science or the “science” says.