Here’s some free publicity for a pretty cool series.  And hey it’s all about the weather. ~ctm My guess is that somebody will come up with a similar series about chasing “climate disruption”. – Anthony 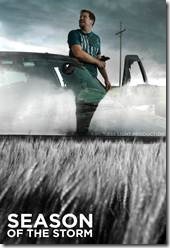 This past weekend Limitless Light Productions premiered their new web-series “Season of the Storm”. The series follows professional and longtime storm chaser Adam Lucio, as he embarks to find America’s most captivating and extreme storms. “We started the process in 2011 where I found the utmost interest in Joplin, Missouri where the most deadly, single tornado in modern history took place,” Mike Mullenhoff, Co-Producer, and Director of Photography of Season of the Storm, “It was eye-opening to see what mother nature is capable of.” The series star, Lucio who

Season of the Storm Official Poster has been storm chasing for fifteen years, was delighted when Mullenhoff came to him to shoot the series, “It sounded exciting, I was definitely intrigued” Adam Lucio, the star on Season of the Storm. According to the producers, it was originally shot as a documentary feature film, however, “after a few chases, we decided to change it to a series and I couldn’t be more satisfied with how it turned out” says Mullenhoff. The series showcases six in-depth episodes that allow you to witness the real, raw, and beautiful side of storm chasing.

“We really did not want to capture any of that fake reality type drama, it kind of takes away from the series.” Bailey Durham, Co-Producer of Season of the Storm. Although the series is a reality-based documentary, the producers have taken a whole new approach without any of the reality bull-s***!

The series has been received better than what the producers had initially anticipated. “We are super thrilled with the way the public reacted and the positive feedback we have acquired just from the opening weekend; we are looking forward to a potential season two!” Durham adds.

Season of the Storm is now available for on-demand streaming on any electronic device. You can find the series on seasonofthestorm.com.

I agree, CTM. Based on the trailer, it appears “pretty cool”.

Luckily, though, I have lots of other stuff I’d rather do than watch “reality TV”.

Regards to all,
Bob

We could use some general and entertaining education on the weather. John Coleman RIP founder of the the Weather Channel is greatly missed by this community.

As much as I enjoy storm chasing, having done a bit in the 1980s, I see this leading stupid people to doing stupid things. Severe thunderstorms and tornadoes are nothing to screw around with and can turn deadly so quickly it is over before you even know it is happening. Oh, well, these guys look like they have a clue, good luck to them.

Reminds me of living with Grizzlies. Sooner or later, they’re going to get the video they’re after – the one of them being eaten alive.

This series will likely encourage some number of amateur storm chasers and thoughtless thrill seekers, to put their lives and the lives of others, at risk.
A few years ago, the highly respected veteran storm chaser Tim Samaras was killed in the Oklahoma City metro area, along with his son Paul and partner, Carl Young. They were chasing a very violent tornado during the evening rush hour. The storm was not only producing blinding, torrential rains, but was changing directions, traveling in a large arc pattern, as well as straight- line movement.
Mr. Samaras was a seasoned meteorologist, who had a reputation for caution.

Was sorry to read of them being killed. As any multi tour combat vet will tell you, no matter how good you are sometimes the luck just runs out. Had 3 close calls with parachutes, decided it was time to step away. Tim was working a storm, as he had many others, and had he made it through that he would have kept doing the work, just a bit more cautiously. Thrill seekers have close calls and then try to repeat the circumstance, same reason I kept jumping after leaving service, I just knew when to let it go. Still do some high work, roofing and building structures, just not as freewheelingly as I used to. 😉

I have been as close to a grounded tornado as I ever want to be, and it was WAY to damned close. Have willingly done lots of dangerous thing in my life, knowingly crossing the path of an oncoming tornado is one I will never do again.

Watched the trailer, and wondered how the effect would be different using Bach, Mozart of Haydn soundtrack.

Sorry, but fine art music doesn’t match up well with the frenetic, jumpy, cinema verate-style editing of the trailer. This is all the rage now but I hope the series is more measured. I’ve watched similar documentaries on TWC, Discovery, and the like. With some of them, it isn’t all “over the top” nonsense so I’m not sure this series will be a stand out.

And drunk driving outdoes them all.
https://www.responsibility.org/alcohol-statistics/drunk-driving-statistics/drunk-driving-fatality-statistics/
Alcohol related traffic accident fatalities were 10,000 in 2017, equivalent to the worst year in Vietnam (1968), the Galveston hurricane, and perhaps all tornadoes in the US in the past century (I’d have to add that up, but it’s bedtime).

I dunno, I think I like Season of the Witch better — at least there no PCism:

Driving the back roads of the Plains is kind of fun. And you will get to like McDonalds.

BBC Climate Check For 1961 (The One They Won’t Broadcast!)

California’s Wild Weather, Wet or Dry, is Nothing New

Terraforming the Northern Sahara Will Save the World