Trump thinks scientists are split on climate change. So do most Americans

There’s a 97% expert consensus on human-caused global warming, but most Americans are unaware

Back around 2009, I “crossed swords” with Mr. Nuccitelli a few times in the Yahoo! Answers forum.  Dana is a smart guy and strikes me as a very decent person.  The last think I want is for him to be able to copy one or two words from my post and run whining to  the the New York Times and complain about civility; so I will make a concerted effort to not insult him in this post… But I just can’t resist this…

Dana… Mr. Data is laughing at you.

Much of my rebuttal was put together from prior WUWT posts on this subject, there’s at least one new addition to the vast evidence of scientific division (Stenhouse et al., 2017).

Stenhouse et al., 2014   told us that atmospheric scientists are very divided on climate change over the past 150 years.

Only 45% of meteorologists and atmospheric scientists endorse the so-called consensus.  Even self-described climate scientists only reach 78%.

Maibach et al., 2016 told us that atmospheric scientists were very divided about climate change since 1950.

Close, but no cigar… Only 96% of “scientists” agree that climate change is real.

Only 67% of “scientists” characterized climate change as real and man-made.

Only 38% of “scientists” characterized climate change as having been dangerous (primarily or exclusively harmful impacts) over the past 50 years.

Only 50% of “scientists” characterized climate change as being dangerous (primarily or exclusively harmful impacts) over the next 50 years.

“And today, there’s no greater threat to our planet than climate change.”

So climate change can no longer be denied – or ignored. The world is looking to the United States – to us – to lead. 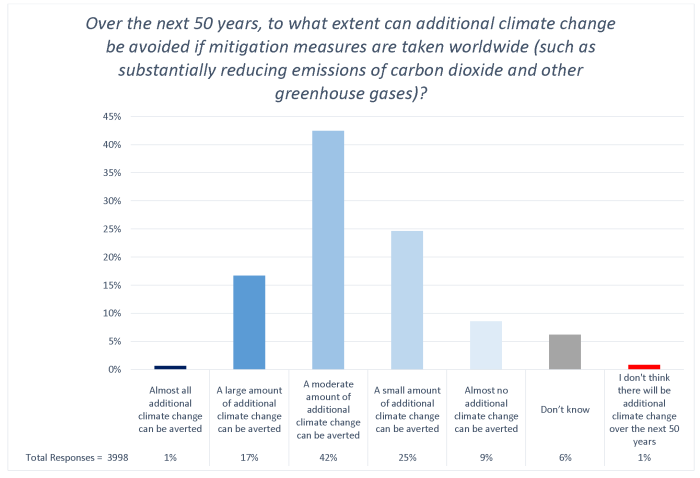 Only 18% of “scientists” thought that there was any point in destroying our economy in order to prevent the weather from changing. Fully 41% of “scientists” indicated that climate change might as well be “ignored.”

Conflict within the AMS

Stenhouse et al., 2017 tells us that there is conflict within the American Meteorological Society on the subject of climate change.

This article analyzes open-ended survey responses to understand how members of the American Meteorological Society (AMS) perceive conflict within the AMS over global warming. Of all survey respondents, 53% agreed that there was conflict within the AMS; of these individuals who perceived conflict, 62% saw it as having at least some productive aspects, and 53% saw at least some unproductive aspects. Among members who saw a productive side to the conflict, most agreed as to why it was productive: debate and diverse perspectives enhance science. However, among members who saw an unproductive side, there was considerable disagreement as to why. Members who are convinced of largely human-caused climate change expressed that debate over global warming sends an unclear message to the public. Conversely, members who are unconvinced of human-caused climate change often felt that their peers were closed-minded and suppressing unpopular views. These two groups converged, however, on one point: politics was seen as an overwhelmingly negative influence on the debate. This suggests that scientific organizations faced with similar conflict should understand that there may be a contradiction between legitimizing all members’ views and sending a clear message to the public about the weight of the evidence. The findings also reinforce the conclusion that attempts by scientific societies to directly address differences in political views may be met with strong resistance by many scientists.

So… Where does this 97% number originate?

Second hand opinions of abstracts of papers. The authors’ tabulate their opinions regarding whether or not the abstracts support the AGW paradigm.  One of the earliest examples was Anderegg et al., 2010.   The most recent and oft-cited is Cook et al., 2013 (Mr. Nuccitelli was a coauthor).

As Legates et al., 2013 pointed out, Cook defined the consensus as “most warming since 1950 is anthropogenic.” Cook then relied on three different levels of “endorsement” of that consensus and excluded 67% of the abstracts reviewed because they neither endorsed nor rejected the consensus.

The largest endorsement group was categorized as “implicitly endorses AGW without minimizing it.” They provided this example of an implied endorsement:

Carbon sequestration in soil, lime muds, trees, seawater, marine calcifiers and a whole lot of other things have always been important for mitigating a wide range of natural processes. I have no doubt that I have implicitly endorsed the so-called consensus based on this example.

The second largest endorsement group was categorized as “implicitly endorses but does not quantify or minimize.” Pardon my obtuseness, but how in the heck can one explicitly endorse the notion that “most warming since 1950 is anthropogenic” without quantification? This is the example Cook provided:

By this subjective standard, I have probably explicitly endorsed the AGW “consensus” in many of my WUWT posts.

One of the most frequent refrains is the assertion that “climate scientists” endorse the so-called consensus more than other disciplines and that the level of endorsement is proportional to the volume of publications by those climate scientists. Well… No schist, Sherlock! I would bet a good bottle of wine that the most voluminous publishers on UFO’s are disproportionately more likely to endorse Close Encounters of the Third Kind as a documentary. A cursory search for “abiogenic hydrocarbons” in AAPG’s Datapages could lead me to conclude that there is a higher level of endorsement of abiogenic oil among those who publish on the subject than among non-publishing petroleum geologists.  This doesn’t elevate their hypothesis to a scientific consensus.

These exercises in expertise cherry-picking are quite common. A classic example was Doran and Kendall Zimmerman, 2009. This survey sample was limited to academic and government Earth Scientists. It excluded all Earth Scientists working in private sector businesses. The two key questions were:

1. When compared with pre-1800s levels, do you think that mean global temperatures have generally risen, fallen, or remained relatively constant?

2. Do you think human activity is a significant contributing factor in changing mean global temperatures?

I would answer risen to #1 and my answer to #2 would depend on the meaning of “human activity is a significant contributing factor.” If I realized it was a “push poll,” I would answer “no.”

Interestingly, economic geologists and meteorologists were the most likely to answer “no” to question #2…

The two areas of expertise in the survey with the smallest percentage of participants answering yes to question 2 were economic geology with 47% (48 of 103) and meteorology with 64% (23 of 36).

The survey was limited to government and academic scientists.  Had the survey included economic geologists in the mining and oil & gas industries, only about 30% would have answered “yes” to question #2.

The authors then derisively dismissed the opinions of geologists and meteorologists…

It seems that the debate on the authenticity of global warming and the role played by human activity is largely nonexistent among those who understand the nuances and scientific basis of long-term climate processes.

The authors close with a “no schist, Sherlock” bar chart:

The most recent example of expertise cherry-picking was Stenhouse et al., 2014.

The 52% consensus among the membership of the American Meteorological Society explained away as being due to “perceived scientific consensus,” “political ideology,” and a lack of “expertise” among non-publishing meteorologists and atmospheric scientists…

While we found that higher expertise was associated with a greater likelihood of viewing global warming as real and harmful, this relationship was less strong than for political ideology and perceived consensus. At least for the measure of expertise that we used, climate science expertise may be a less important influence on global warming views than political ideology or social consensus norms. More than any other result of the study, this would be strong evidence against the idea that expert scientists’ views on politically controversial topics can be completely objective.

Finally, we found that perceiving conflict at AMS was associated with lower certainty of global warming views, lower likelihood of viewing global warming as human caused, and lower ratings of predicted harm caused by global warming.

So… Clearly, 97% of AMS membership would endorse the so-called consensus if they were more liberal, more accepting of unanimity and published more papers defending failed climate models.  No schist, Sherlock!

What, exactly, is a “climate scientist”?

NASA’s top climate scientist for most of the past 35 years, James Hansen, is an astronomer. The current one, Gavin Schmidt, is a mathematician.

It seems to me that climate science is currently dominated by computer modelers, with little comprehension of the natural climate cycles which have driven climate change throughout the Holocene.

Climate scientist seems to be as nebulous as Cook’s definition of consensus.

I wrote this without actually reading beyond the headline of Mr. Nuccitelli’s article.  Did I miss anything?

OK… I glanced at it… Nope, I didn’t miss anything.