We reported last week on the cooling problems associated with GOES17 and the infrared imager. Now a new image has been released that shows the western U.S. and the Pacific.

The National Oceanic and Atmospheric Administration released the GOES-17 satellite’s first image Thursday. It shows the Western Hemisphere in detail from 22,000 miles up.

Last week, NOAA reported that critical infrared sensors in the satellite’s main instrument were not staying cold enough. The picture taken May 20 and released Thursday relied mostly on the few unaffected channels in the visible light and near infrared.

NASA launched GOES-17 in March. The problem with the satellite’s advanced imager cropped up during routine testing several weeks after liftoff. A special team is investigating the issue.

An identical imager, also made by the Florida-based Harris Corp., is working fine on the 2016-launched GOES-16.

We have good visible imagery of the Earth. Spy satellites specialise in this.

The satellite was meant to be looking at the infra-red wavelength.

So much for the idea that Earth is a Blue Marble in space.

Depends on how far away you are…

0
Bryan A
Reply to  Yirgach

Or mebbe it looks brighter cause the solar minimum causes more clouds ala Svensmark..

Mebbe to a distant (several light years) observer, the albedo of planet appears to wax and wane.

If it is analogous to a marble, it’s a ‘swirly’!

The responsible person should be sent there to fix it for free. It must be still covered by the warranty as it is very new.

Actually a whole team of very skilled and dedicated people design and assemble these satellites, I have the pleasure to work with some of them.

All kinds of sophisticated engineering and assembly processes are developed, tested and followed while these incredible machines are built. Even down to tracking each individual foundry “melt” of the Beryllium metal that make up the spine of these machines.

I can assure you that all involved in building this individual machine are “heartbroken” that all of their efforts ended up with a unit with less than the stellar performance designed into these wonders.

And you can be assured that they will find the reason and accommodate the operations to still get the best value out of the unit.

Just some more insight about how these instruments are built, the basic frame (like the frame of a car) is slowly machined out of a big “chunk” of Beryllium (a toxic metal that takes extreme care to machine) in stages. After several machining steps the whole unit is annealed in a furnace to relieve the residual stresses in any piece of metal left from the extreme temperatures present when the metal is poured and or forged. Then machining continues until something like 80% of the original metal is removed; like carving a elephant from a block of granite, just remove everything that does not look like an elephant.

Then precision optical components with surfaces that are manufactured within a few 1/100’s of a wavelength of light are added. Then electronics that can last for 7 plus years in an atmosphere filled with high energy particles that can literally “blast” a transistor junction into dust are added.

Then the whole thing is subjected to a complete “Shake AND Bake” test regime that would make most teeth fillings leave your mouth and give you a very nice tan.

After seeing the steps involved I am amazed that these satellites work at all….

i understand that sometimes, given the enormous manufacturing cost to do all that you describe, they build two so they have a spare if something like this happens. Any chance they did this hee?

GOES-17 is the second of four “identical” satellites. It’s “twin” — GOES-16 has been on-station ove the Atlantic for over a year, and does not have cooling issues. The big concern at this point is figuring out what is wrong so that as much use as possible can be made of GOES-17. And making sure that GOES-18 and 19 don’t have the same problems when they are launched in a few years.

Yes there is a “spare” satellite strategy, but they are scheduled over years. One of these was intended to be a spare “on-orbit” satellite to backup an older unit.

But the older unit “crapped out” sooner than expected so the spare had to “step to the front of the line” to take over the important duties.

All of this takes years and lots of planning. Not like calling the AAA to change out a flat tire on your car (AAA is a paid in advance roadside service in the USA that comes when your car breaks down on the road).

Yes there is a “spare” satellite strategy, but they are scheduled over years. One of these was intended to be a spare “on-orbit” satellite to backup an older unit.

But the older unit “crapped out” sooner than expected so the spare had to “step to the front of the line” to take over the important duties.

Kevin – This is way off topic, but you’re someone who might be able to answer this:

If the satellite weight were allowed to grow by using a larger launcher, could the design use a less exotic and expensive structural material; like 3-D printed titanium in lieu of beryllium?

Looks like a lot of white clouds. Maybe the Earth should be considered a white body and model results be reprogrammed for the limited clear/black body effects for global warming. Ohh, …. just the thought.

The visible light picture is the last thing of importance possible zero. and by the way the pic above is computer generated fake , real pictures from space don’t look anything like it.

I’ve seen you make the same assertion several times before. Do you have photographic evidence to back up your assertion. If so, please post them. Otherwise quit blowing smoke.

Actchally, the best images in IR and visible and radio wavelengths are captured by a few satellites. Some are commercial and you can pay to get pretty good imagery. Others you can get from the U.S. NRO if you have need-to-know and certain clearances. They are not geosynchronous, so are not very good for storms or other phenomena on a real time basis. One of them really helped us in the Panhandle this last week, so we knew with certainty where the storm was in real time.

This new guy can still provide very good IR imagery almost all of the time. It just has problems at certain times of the day/orbit.

It is not acomplete loss or even a major loss, just a disappointing failure after lots of hard work.

I got dramatic news for you Eben. The way one sees any picture is “fake”, because one’s brain hallucinates what one thinks is “seeing”. There are no “real pictures”. There’s just agreement and disagreement about one’s hallucinations. What one sees is “brain-generated”, does it make it fake too?

Well obviously it’s a fake, isn’t it Eben, since the real earth is flat 😉

Does anyone know (with a link please) if this is an actual photograph or if it is a false-color image?

It’s a hybrid image using the red and blue visible channels and an IR “vegetation” channel as the green image to produce the RGB image.

It’s pretty close to “True Color” but not exactly.

I read, in documents explaining Geocolor, that the green channel was modeled on data from Himawari-8, but your link contradicts that.
Once I get acquainted with a new pixel manipulation program compatible with the Windows10 virus, I’m going to try using the vege band as a green channel to see what a composite looks like.

Here is the Red + Blue + Vege channel (used as Green) merged into a composite image: 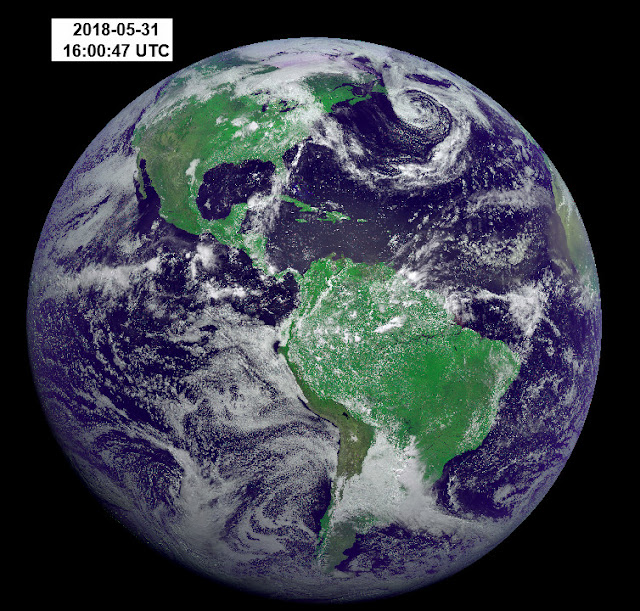 The day component of the Geocolor image above is made from the blue and red visible channels, plus a green model, and is thus similar to an RGB photo (a composite of three channels), but with a modeled version of green! You can see small errors on blue-green gradients at high resolution, occasionally, if you look carefully. Otherwise, the model seems to work very well.

Geocolor night is made using a combination of IR channels to reveal clouds and ice (blue for low clouds, fog, snow and ice, white for high clouds), overlaid on composite images of the Earth at night from the NASA bluemarble database. The GOES 17 image taken at around geostationary noon, shows only a small fraction of night at the south pole – because it’s winter.

Himawari-8 has a real green channel, GOES uses a model. You can compare the Geocolor images from both satellites with this handy tool:
http://rammb-slider.cira.colostate.edu/
(right click to zoom in on any point, use menu options on left to change satellite, change channels, change product, or to create loops from archived images)

At work we use:

with no ‘Blue Marble’ or ‘Nighttime Lights of the World’ background.

Thanks for that recipe. I gave it a shot: 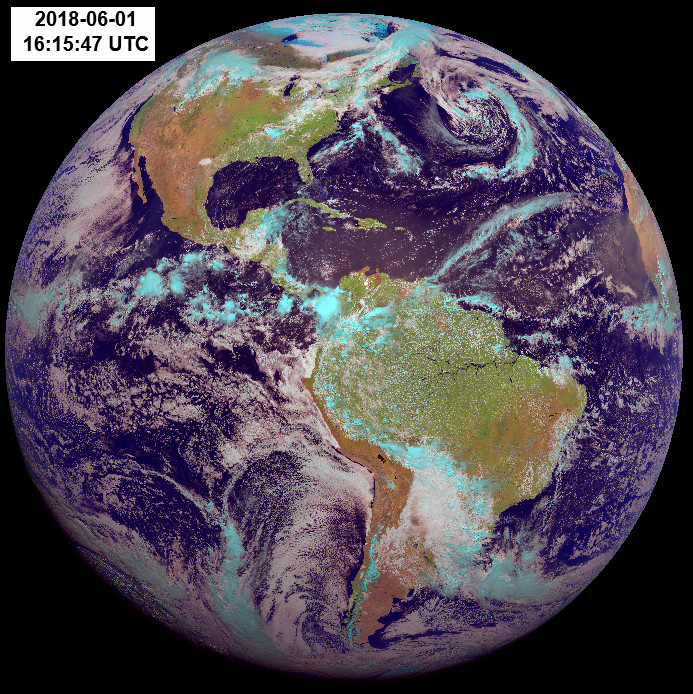 Not bad. It seems to produce the same result as the “natural color” composite product, with ice & cold clouds appearing in an unnatural blue hue. Continents do appear more natural, and Saharan dust isn’t a sickly green, as it is in the Red/Veggie/Blue composite.
But still, it is nothing like true color, which, for the GOES-R series, seems to require a modeled green channel.

Unlikely. All that CO2 should be intercepting the upwelling heat.

0
Crispin in Waterloo but really in Ulaanbaatar
Reply to  Grant

I am assuming that it is cooled by a thermo-acoustic device. I’ll ask. If there is a serious problem with it, the cause it probably a gas leak (helium) reducing its heat transporting ability. As helium walks through walls, it has to be replenished from a tank. Maybe it has a stuck valve.

How’s that for pure speculation? I am studying climate science.

I recollect reading that the cooling issue is limiting the sensor temp cooling mainly while the satellite is in sun. So I wonder if that will allow some limited use of the affected channels as the thing passes through earth’s shadow for a few hours a day.

Great picture, as others have noted there does seem to be a lot of cloudiness around the planet. From the daily pics I save from earthnull, I would say that it is getting cloudier in recent years.

Randy. GOES-17 is in geostationary orbit. I’d have to do some research to be sure, but it’s pretty far out (radius=42000km – altitude=35000 km) and I think it’s only shaded by the Earth for a short daily period at most, and then only around the vernal and advernal equinox periods around March 21 and Sept 21.

Caveat: I’m really not smart enough to get that calculation right. If you want a better answer, ask an astronomer.

Wow, that is a great picture. I’m amazed by the dense clouds crowding up against the Baja peninsula, but not crossing it. Interesting phenomena.