From the “models are always accurate in climateland for the next 80 years” department comes this claim of “weather, er, climate whiplash”.

According to the study published today, California will zigzag between droughts and floods which will become more intense and more frequent in the coming decades unless global emissions of planet-warming greenhouse gases are checked. Study authors point to the fact that California has already experienced a rapid rise in such “whiplash” events – going from a record multi-year drought between 2012 and 2016, to heavy flooding in the winter of 2016-17. Apparently, that’s a sure sign of “whiplash”.

According to the authors, the situation will worsen as the global climate alters due to mankind’s voracious burning of coal, oil, and gas for energy. Gosh.

Their models project that wet-to-dry extremes in California could double under a worst-case scenario in which fossil fuel emissions continue growing until 2100. The researchers projected a 25-percent rise in the frequency of so-called whiplash events for northern California this century, and up to 100 percent in the south of the state.

They mention a disaster on the scale of the 1862 “Great Flood” was likely to occur at least once between now and 2060 and would “probably lead to considerable loss of life and economic damages approaching a trillion dollars,”. Ooof! Sounds like they’ll need more taxes to foot the bill in the future.

The models say multiple such events were “plausible” until 2100. But, the researchers don’t explain how such extreme events could happen in 1862 without the help of “global warming”.

Mediterranean climate regimes are particularly susceptible to rapid shifts between drought and flood—of which, California’s rapid transition from record multi-year dryness between 2012 and 2016 to extreme wetness during the 2016–2017 winter provides a dramatic example. Projected future changes in such dry-to-wet events, however, remain inadequately quantified, which we investigate here using the Community Earth System Model Large Ensemble of climate model simulations. Anthropogenic forcing is found to yield large twenty-first-century increases in the frequency of wet extremes, including a more than threefold increase in sub-seasonal events comparable to California’s ‘Great Flood of 1862’. Smaller but statistically robust increases in dry extremes are also apparent. As a consequence, a 25% to 100% increase in extreme dry-to-wet precipitation events is projected, despite only modest changes in mean precipitation. Such hydrological cycle intensification would seriously challenge California’s existing water storage, conveyance and flood control infrastructure.

Of course, the study is pay-walled, so unless you fess up or are a member of the climate anointed, you can’t read it. However, I did find the blog of lead author Daniel Swain, and he includes graphs of the model output, such as this one, suggesting 40 day (and presumably nights) rain events will get more common in a nice linear fashion. 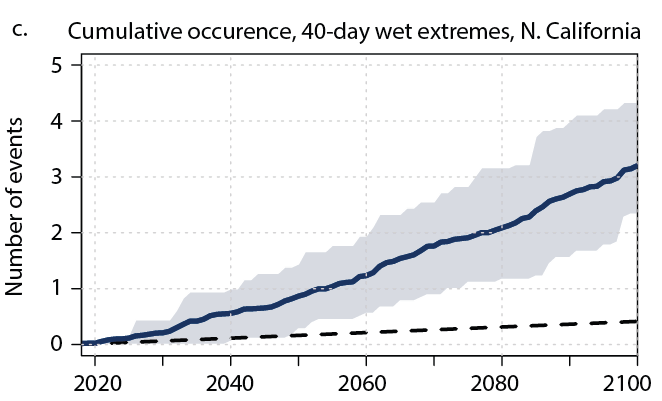 Here, Swain talks about the big flood of 1862, but offers no explanation how it happened when CO2 was far less than today.

California’s “Other Big One”: repeat of the Great Flood of 1862 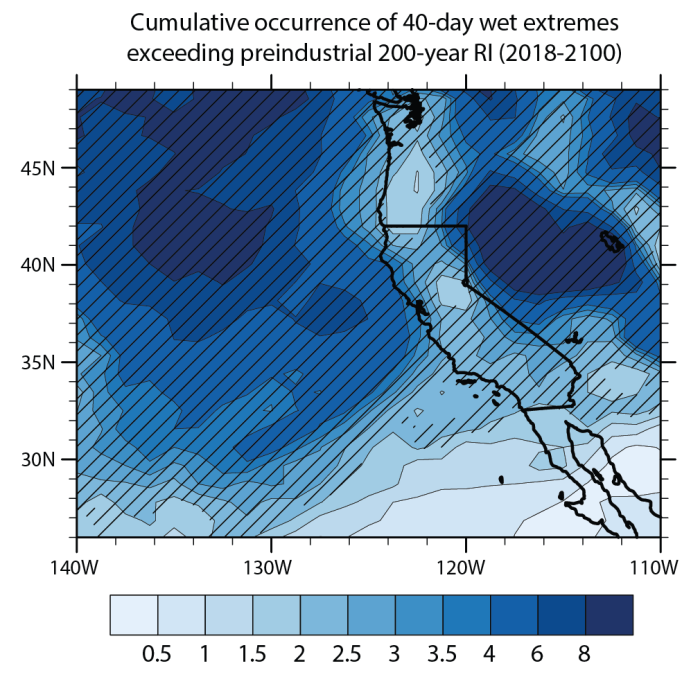 Between December 1861 and January 1862, the nascent state of California experienced a truly extraordinary meteorological event: a more than 40-day long onslaught of extremely moist “atmospheric river” storms that led to widespread inundation on a massive scale. Newspaper reports and personal journals suggest that nearly every river, stream, and creek between central Oregon and the Mexican border experienced significant flooding during this event, which brought dozens of inches of rain even to California’s drier low-lying coastal areas over the course of just a few weeks, and well over 100 inches of rain (over 8 feet) along the western slopes of the Sierra Nevada over a two month period. The Central Valley was transformed into a 25-mile wide, 300-mile long inland sea as deep as 20 feet in some places; newly-elected governor Leland Stanford was transported to his January inauguration at the state capitol via rowboat through the streets of Sacramento shortly before the state legislature made the decision to temporarily relocate to San Francisco. Vast swaths of land in Los Angeles and Orange counties were underwater—land that is now heavily urbanized, and home to millions of Californians. (For those interested, I highly recommend this excellent long read on the 1862 flood event, as well as this earlier piece in Scientific American.)

The U.S. Geological Survey, in a landmark report published in 2011, termed a modern repeat of a similar extreme storm sequence California’s “Other Big One”—an indication that the impact of such an event would be comparable to the enormous damages wrought by a large-magnitude earthquake near San Francisco or Los Angeles. It’s not difficult to see why the “ARkStorm” scenario would be devastating in present-day California: the state is now home to nearly 40 million more people than it was in 1862, nearly a quarter of whom live in floodplains that would be inundated during an event of this magnitude. California today depends on an enormously extensive water storage and distribution system to satisfy agricultural irrigation demands in the Central Valley and urban water needs in its thirsty coastal cities; many of the levees and dams that make up this vast water network also serve as flood control structures that protect urban areas from rising waters during storm events. All of California’s major economic sectors—from Silicon Valley tech to Hollywood movie production to large-scale agriculture—could grind to a virtual standstill in the aftermath of such an event. Overall economic damages could approach a trillion dollars, and thousands of lives would be at risk.

This all may sound pretty implausible, like something out of a disaster movie. But the underlying physical event (a 40+ day sequence of extreme storms) is not a theoretical construct—it definitely happened in 1862. And paleoclimate analysis of sediments from California’s coastal river systems suggests that events of a similar magnitude have happened many times in the region’s deeper past—approximately every 200 years. But how will the odds of such a potentially catastrophic event change as the climate warms?

Our new analysis suggests that the risk of an extreme “sub-seasonal” 40-day precipitation event similar in magnitude to that which caused the 1862 flood will rise substantially as the climate warms. By the end of the 21st century, we find a 300 – 400+ % increase in the relative risk of such an event across the entire state. One specific statistic that my colleagues and I found particularly eyebrow-raising: on our current emissions trajectory, at least one occurrence of an 1862-level precipitation event is more likely than not over the next 40 years (between 2018 and 2060), with multiple occurrences plausible between now and the end of the century. In practical terms, this means that what is today considered to be the “200-year flood”—an event that would overwhelm the vast majority of California’s flood defenses and water infrastructure—will become the “40-50 year flood” in the coming decades.

Then there’s this handy “whiplash graphic”, suitable for making a wall poster to remind you how terrible the future will be in Cali: 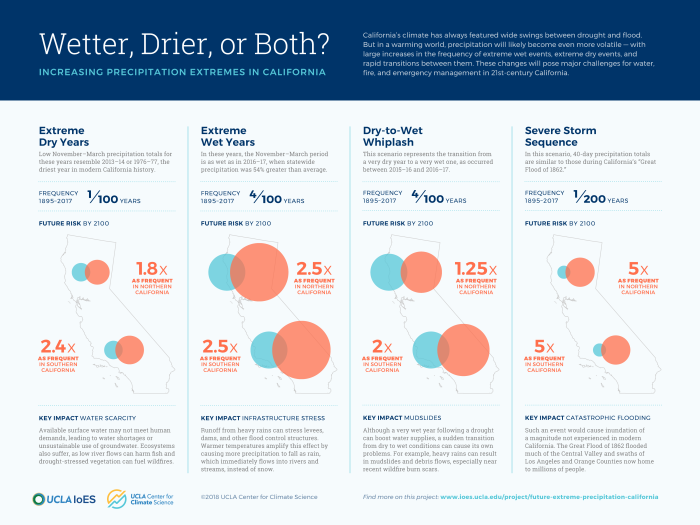 However, the lead author, Swain, has this citation:

So with that sort of eco-background, I can surmise this is just another NGO driven study looking for the next research grant. Based on my experience, and my read of it, I don’t think it has much real science in it, but rather is just another example of PlayStation Climatology™ tweaked to scare the bejesus out of dolts like Moonbeam Governor Brown so he’ll throw money at them.

70 thoughts on “Study: California to get "climate whiplash" between drought and floods”