“But who’s going to listen to some guy in his basement with a coil of copper wire on his roof?”

We’ve covered this before, and now here’s the backstory and timeline from NASA Goddard, it’s fun reading.

A Detailed Timeline of The IMAGE Mission Recovery

The Imager for Magnetopause-to-Aurora Global Exploration, or IMAGE, spacecraft was re-discovered in January 2018 after more than twelve years of silence. A powerhouse of magnetosphere and aurora research, the IMAGE mission was a key driver of studies of the Sun-Earth connection from its launch on March 25, 2000, until its last contact on Dec. 18, 2005.

Now a watchful citizen scientist, NASA, and a team of IMAGE scientists and engineers detected and received data from the spacecraft. Here’s how it happened. 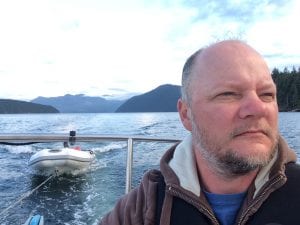 Sometime in the afternoon – Reviewing the previous night’s data manually – 4 MHz at a time – Tilley detects an unexpected radio frequency signal. Analyzing the specifics of its Doppler Curve – the way the frequency modulates as it crosses the sky, like the siren of a passing ambulance – and comparing it to the orbital elements logged in the space-track catalog, it came back as NASA spacecraft 26113, corresponding to the IMAGE mission.

Unaware of any details of the mission, Tilley shrugged, logged the finding into his database, and continued looking through his data.

A few minutes later. Reconsidering his findings — why hadn’t he ever detected the satellite in any previous scans? — Tilley took a closer look. Suddenly a portion of the spectrum just below the data he’d read jumped out. The (relatively weak) signal he’d originally detected had only been a harmonic of the spacecraft’s fundamental frequency, which was much stronger – one of the strongest he’d seen.

A review of public frequency lists – where other amateur astronomers post their findings – came up empty. No one else had detected this satellite in recent years. After some research, Tilley turned up an article on EO PORTAL about the IMAGE mission. “But they were referring to IMAGE in the past-tense,” Tilley said.

Tilley eventually found IMAGE’s detailed Failure Report which stated that the spacecraft’s power source had likely been tripped, and that NASA had watched to see if it might be rebooted by an extended eclipse. But a 2007 eclipse came and went while IMAGE remained silent, and the mission was declared over.

“The realization came over me . . . that what I was observing was the fact that the spacecraft had rebooted,” Tilley remarked. “But who’s going to listen to some guy in his basement with a coil of copper wire on his roof?”

01:48 am EST – Tilley publishes his findings in a blog post, then spends the next two days at work.

01:38 am EST – Ruminating on his findings with his wife over dinner (who, according to Tilley, admonished him that “someone who’s smart enough to find a lost satellite surely can find the guy who built the thing”), Tilley gets up from the table to do some more research. He discovers the contact information for Dr. James Burch, the IMAGE principal investigator at the Southwest Research Institute in San Antonio, Texas, and emails him about his findings.

4:41 am EST – Burch responds. “This is very exciting. I really appreciate your doing this and letting me know about it.”

Burch shares the news with Richard J. Burley, former ground system manager and mission director for IMAGE at Goddard Space Flight Center in Greenbelt, Maryland. Burley (after reportedly having to “clean all the coffee off of my laptop that I spit on it when I saw Jim Burch’s email…”) jumps to action, contacting NASA’s Space Science Mission Operations Office (SSMO) and Deep Space Network (DSN) to alert them.

11:44 am EST – With the news of the discovery spreading amongst the hobbyist community, amateur observer Paul Marsh reports to Tilley the first independent observation of a similar satellite signal:

2:12 pm EST – Burley begins communicating with a team of IMAGE scientists and engineers.  His plan is to first determine if the object sending the signal is indeed IMAGE, and if so, whether the Deep Space Network can communicate with it.

3:31 pm EST – Lisa Rhoads, system engineer and former IMAGE DSN Scheduler at NASA Goddard, recovers the last known Nominal Sequence of Events (NSOE) codes used by IMAGE – essential files used to control the Deep Space Network systems during the execution of pre-pass, pass, and post-pass actions that tell the antennae how to communicate with the spacecraft.

She also updates Burley on the ways that the Deep Space Network had changed since 2005. Major changes include the decommissioning of several ground stations and antennae that were used to track IMAGE in the past, as well as several significant functionality changes in how the communications work.

11:02 pm EST  – Rhoads begins setting up the software required to communicate with IMAGE, including the NSOE codes.

To verify Tilley’s radio frequency observations as well as attempt to directly contact the satellite, NASA team members across the US begin coordinating to verify the downlink signal with a spectrum analyzer and capture a digital spectrum recording.

Leslie Ambrose (Goddard) and the Telecom Networks & Technology Branch at Goddard attempt to use a local Near Earth Network antenna to track the spacecraft.  Unable to detect a signal on its first attempt, a review of pointing data and center frequency and adjustments are made and another attempt is planned for the following day.

Rebecca Besser (Goddard) and Dale Fink (Goddard) create orbit models for IMAGE to determine when recent long-duration eclipses occurred and understand when IMAGE could have been rebooted.  They identify an eclipse in mid 2012, which was as long as that of 2007, and another in early 2017, though it was not as long.

11:54 am EST – Engineers at Goddard acquire the downlink signal and analyze its characteristics. Initial readings are consistent with those expected from the IMAGE spacecraft.  Further analysis reveals that the signal strength is oscillating, indicating that the target object may be spinning, as would be expected if the object was, in fact, IMAGE.

Throughout the day, five antennae located throughout the US—in Greenbelt, Maryland; Laurel, Maryland; Berkeley, California; White Sands, New Mexico; and Wallops Island, Virginia—come online to monitor and track the object. With all five sites producing consistent readings, there is much optimism that it is, in fact, IMAGE.

2:59 am EST – Tilley completes a review of his data archive and sends results to Burley, suggesting based on analysis of the Doppler Curve that the spacecraft has been transmitting since at least May 4, 2017.

Doppler curves matching those of IMAGE are detected on May 4, 2017.
Credits: Scott Tilley, AScT

9:28 am EST – Notifying the team that the five antennae have agreed on basic radio frequency characteristics of the object, Burley sets the next goal: to read data from the spacecraft.

“Once we successfully capture data, we need the tools to examine the data in order to verify with certainty that it is IMAGE,” Burley writes in an email. “The definitive proof of identity requires reading the data, which will contain IMAGE’s unique [NASA-internal] spacecraft ID number: 166. Until this is done, although the evidence may be strong, we cannot be certain that the spacecraft is in fact IMAGE.”

The challenge for doing so is primarily technical. “The hardware and operating systems that we used back in the day no longer exist,” Burley explains. “The FEDS/ASIST systems still exist and are in use on other missions, but they have been re-hosted, moved from AIX to Linux, and are about a dozen versions ahead of what we used on IMAGE. I’m certain that we’ll run into some compatibility issues.”

Burley adds a closing question: “Does anyone happen to have a 4 mm tape cartridge reader that will work on a modern Linux workstation and a 16-year-old data tape and not disintegrate it?”

3:06 pm EST – Meanwhile, Dr. Cees Bassa, an astronomer at the Netherlands Institute for Radio Astronomy and collaborator with Tilley, reviews his own data and detects the purported IMAGE signal as early as October 2016:

Timeline of IMAGE’s operational periods and eclipses that could have rebooted it
Credits: Dr. Cees Bassa (ASTRON, the Netherlands)

Word continues to spread of IMAGE’s potential recovery. Burley and the team continue to re-work the software and locate documentation in preparation for retrieving data from the spacecraft.

Having overcome the first challenges of knowing the signal signature and where to point the antenna to find it, the hard work begins at the Johns Hopkins University Applied Physics Lab, or APL, in Laurel, Maryland, to track and read data from the spacecraft.

9:40 am EST – IMAGE track begins and the APL Satellite Communications Facility, or SCF, team starts the process of trying to achieve “frame sync lock” – locking onto the spacecraft’s telemetry signal to allow data to be retrieved. The SCF team, working with an incomplete set of IMAGE spacecraft RF and telemetry parameters, try different combinations for over seven hours without success.

Burley successfully locates a 4 mm tape reader – borrowing a backup from the 1995 Solar and Heliospheric Observatory , or SOHO, mission – and begins attempting to read the 16-year-old tapes. Meanwhile, work continues at APL.

3:21 pm EST  – Tom Bialas (Goddard) downloads the first data file, and at last reads its ID number: 166, matching the IMAGE spacecraft. Emails quickly circulate amongst the team that there has been definitive confirmation that the spacecraft is IMAGE.

6:20 pm EST – Engineers at APL start an unattended IMAGE track and continue to capture IMAGE data for a continued 8 ½ hours.

The first data is downloaded and its ID read, but actually accessing and decoding the data it contains requires several more steps – and Burley and the team at Goddard are hard at work deciphering them.

12:40 pm EST – The first data files, indicating the state of the spacecraft, are successfully decoded. The team learns that the battery is fully charged at 100%, and its temperature is in line with those in 2005 and historic values.

3:19 pm EST – Engineers at APL continue to capture IMAGE data. Scientists determine that they are now running on Side A of the Power Distribution Unit (PDU) – a surprise given that it had been thought that the side A was dead after a presumed power failure on Thanksgiving Day in 2004.

The ultimate cause of the current reboot is still not known, but these findings suggest that a reboot in some form has in fact, occurred.

But the data indicate an overall healthy spacecraft. Next steps for the IMAGE team are to see if they can do more than just listen to the spacecraft, and talk back to it. As of Feb. 7, efforts are still underway.