Caribbean battered as Irma, most powerful hurricane ever, makes landfall

Winds of 151mph recorded before monitoring equipment is destroyed by the storm, as eye of hurricane passes over Barbuda and neighbouring Antigua

The most powerful Atlantic Ocean hurricane in recorded history has made its first landfall on the islands of the north-east Caribbean, following a path predicted to hit Puerto Rico, the Dominican Republic, Haiti and Cuba before possibly heading for Florida over the weekend.

The eye of Hurricane Irma passed over Barbuda at about 1.47am local time, the National Weather Service said. Residents said over local radio that phone lines had gone down. Heavy rain and howling winds hit the neighbouring island of Antigua, sending debris flying as people huddled in their homes or government shelters.

Oops! Wrong article.  I should have quoted this pack of lies in part one.

Fresh off the back of the devastating Hurricane Harvey, the US is preparing for an even more dangerous storm – Hurricane Irma. 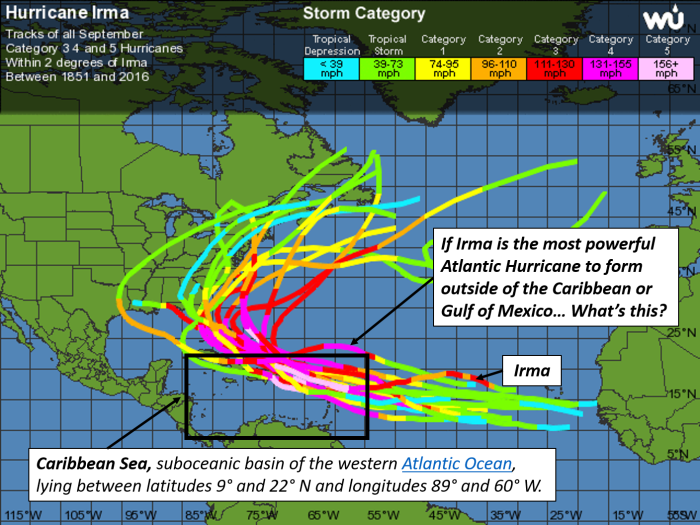 Well? What’s up with that? Note: Caribbean box is 5° of where it should be.  A corrected map has been added in an addendum.